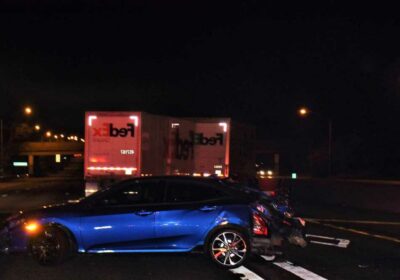 A motorist died after he was ejected from his car during a collision with a FedEx cargo truck in Long Island — just moments after he was involved in an accident with another car, officials said Wednesday.

Neville Stephan, 29, was driving his 2018 Honda sedan on the eastbound Long Island Expressway when he collided with a 2017 Nissan sedan, driven by 19-year-old Xavier Rodriguez.

The accident occurred as both motorists attempted to turn onto exit 60 in Ronkonkoma around 11:30 p.m. Tuesday, Suffolk County police said.

The Honda came to a rest in the center lane and the Nissan stopped on the exit ramp, authorities said.

Both drivers got out and determined neither was hurt, police said.

But when Stephan got back into his Honda, it was struck by the FedEx truck heading east — causing him to be ejected from the car, cops said.

Stephan, of Lake Ronkonkoma, was pronounced dead at the scene by a physician assistant from the Office of the Suffolk County Medical Examiner.

Rodriguez, of Centereach, was taken to Stony Brook University Hospital, with minor injuries.

Cops determined there was no criminality and Khan has not been charged.

The truck was checked by the Suffolk County Police Department’s Motor Carrier Safety Section and released to the owner.

The Honda and the Nissan were impounded for safety checks, cops said.