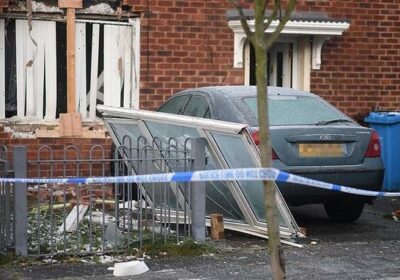 Jealous lover, 43, blew up his own home in gas explosion because he feared his girlfriend, 32, would leave him for a younger man

A jealous lover blew up his own home in a massive gas explosion after fearing his girlfriend would leave him for a younger man.

Self employed joiner Clinton Parren, 43, fetched a camping gas cylinder from his shed and placed it on top of his kitchen hob which he switched it on before laying down on a sofa.

His partner Jennifer Hawksley, 32, who was asleep in bed woke to ‘ringing in her ears’ as the huge 12.30am blast caused by the cylinder bursting on the high heat ripped through their mid terrace property in Wythenshawe, Manchester.

She fled her bedroom to be met by Parren in the hallway saying: ‘It’s all right I’ll sort it don’t worry.’

Miraculously Miss Hawksley was not injured in the explosion but was taken to hospital as a precaution.

Three children – aged six, 12 and 13 – who were staying at the property also escaped uninjured.

At Manchester Crown Court, Parren admitted a charge causing an explosion likely to endanger life or cause serious injury to property. 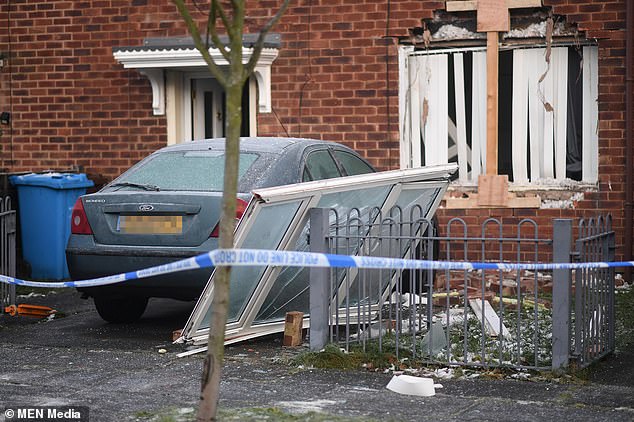 Police and firefighters who examined the property found several of the ceilings in the ground and first floor had lifted from the mounts on the walls,

Police and firefighters who examined the property found several of the ceilings in the ground and first floor had lifted from the mounts on the walls, creating cracks whilst further cracks were found between the walls in several rooms and above doorways.

The front and rear ground floor windows and their had been blown out into the respective gardens whilst several internal doors were hanging off their hinges.

The camping gas cylinder which was the size of a cocoa cola can was found embedded in the kitchen ceiling.

Experts concluded the ‘boiling liquid expanding vapor explosion’ (BLEVE) which occurred on December 30 last year was caused when there was a ‘massive localised increase in pressure around the location of the can leading to a pressure shockwave.’

It is thought the cost of the damage was valued at £10,000. No other properties in the row of terraces were affected. 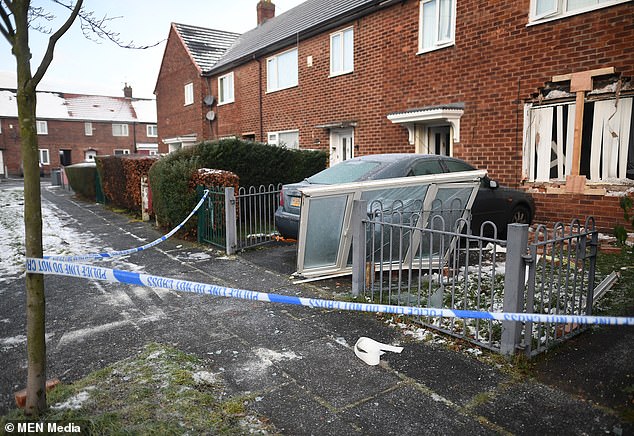 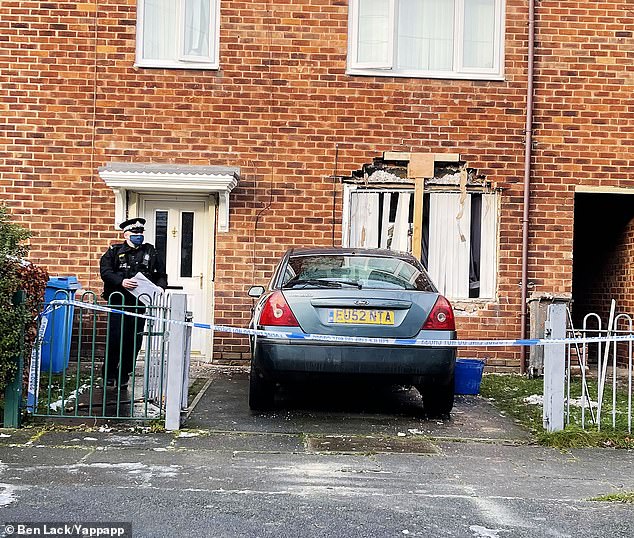 It is thought the cost of the damage was valued at £10,000 but no other properties in the row of terraces were affected

The court heard he and Miss Hawksley had been dating for ten years but he was said to be ‘insecure’ as he ‘feared she would leave him as she is younger than him.’

Mr David Pojur prosecuting said: ‘On the day leading up to the explosion the family attended Go Outdoors and purchased camping items including a gas stove and four gas canisters for use with it.

‘The defendant made clear to his partner that he was going to use the stove to cook soup in the garden.

‘He confirmed to his partner that he had put the stove away in the shed and she understood that the stove together with the canisters were therefore not in the house.

‘That evening they were both intoxicated and getting on well but an argument started the defendant began to say that his partner was going to leave him for somebody younger.

‘She then went upstairs and the defendant followed but she told him to leave.

‘The defendant in drink went to the shed and took three gas canisters, discarded two in the garden and placing the other on the cooker hob, which he then switched on.

‘A large force would have been generated at the base of the can as the contents boiled and it released a rapid moving pressure wave responsible for extensive damage to the property.

‘Jennifer Hawksey described waking up with her ears ringing, there being cracks in her bedroom ceiling and smoke all around the house with the smoke alarms going off.

‘The lounge door was off its hinges, the front door was open and the defendant approached her and said ‘Its alright I’ll sort it don’t worry’. There was in fact chaos and panic.

‘Neighbours heard a very loud bang and the sound of glass smashing. The front living room window was completely smashed. The neighbours could hear the defendant’s partner screaming from within the house.

‘The police arrived and the defendant gave a brief inebriated first account that he had been asleep downstairs on the sofa directly underneath the window which had been blown out of the house.

‘The officer was surprised that he had no injuries but also that he was calm in light of what had happened.

‘He was arrested and later said he assumed that during a time when his partner had taken a bottle of alcohol away from him to pour down the sink, he tried to pull it back and had knocked over various items including a gas canister which had fallen on to the cooker during the scuffle.

‘The defendant could not account for why there were two gas canisters on the ground in the rear garden when he stated they were secure in the shed. He denied putting the canister on the hob and turning the hob on.

‘The defendant was intoxicated when he placed a gas canister on the hob. There was extensive damage throughout the house and he was culpably reckless.. The level of harm risked is high.

Parren had previous conviction for public order offences. A report said he suffers from an ‘adjustment disorder’.

Defence counsel Miss Gwen Henshaw said: ‘The defendant did not foresee the extent of the damage.

‘Multiple fatalities could have occurred but the fact is nobody was injured let alone seriously injured although it is rather by good fortune that no one was hurt.

‘He is haunted by what happened and was heavily inebriated at the time. The size of the gas canister was no bigger than a can of coke and it embedded into the ceiling upon explosion.

‘The defendant says he has never been more inebriated in his life. In the aftermath of the incident he was calm but he was stupefied by the level of alcohol he took.

‘He is a man struggling with his mental health and he would wish for me to exhibit on his behalf significant remorse. He has been extremely tearful and did not set out specifically to hurt anyone.

‘He was reckless but the offence was not premeditated and he was present throughout the explosion. He accepts he put the gas canister on the hob and then lit the hob. He bitterly regrets his actions.’

Parren will be sentenced later.