Kuala Lumpur:  Tens of thousands of Malaysian Muslims have rallied in Kuala Lumpur against any attempt to strip the ethnic Malay majority of its privileges.

The rally on Saturday is the first massive street gathering since Prime Minister Mahathir Mohamad's alliance won a historic vote in May. 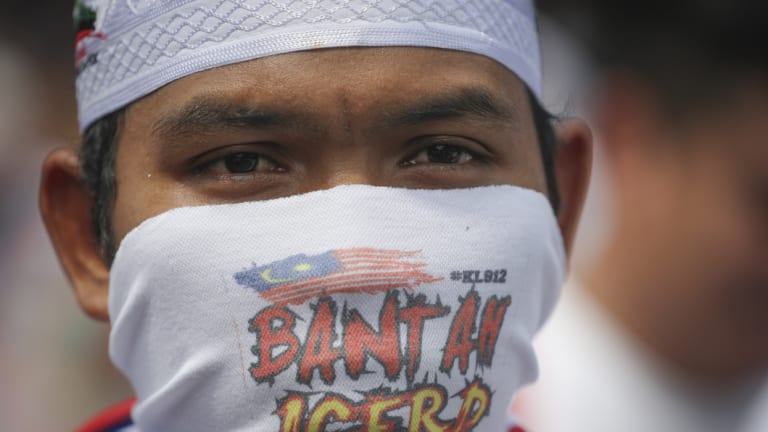 A protester covering his face takes a part in a rally to celebrate the government’s move to withdraw plans to ratify a UN anti-discrimination convention in Kuala Lumpur on Saturday.Credit:AP

The rally, backed by the country's two largest opposition Malay parties, was initially aimed at protesting a government plan to ratify a UN treaty against racial discrimination.

Critics say that ratifying the treaty would end Malay privileges under a decades-old affirmative action policy. The plan to ratify was eventually abandoned, but organisers decided to proceed with what they called a "thanksgiving" rally.

Racial clashes have been rare in multi-racial Malaysia since deadly riots in 1969.

A year later, Malaysia instituted a preferential program that gives Malays privileges in jobs, education, contracts and housing to help narrow a wealth gap with the minority Chinese. Ethnic Malays account for nearly two-thirds of the country's 32 million people, with large Chinese and Indian minorities.

Saturday's rally came less than two weeks after more than 80 people were arrested in a riot at an Indian temple in a suburb outside Kuala Lumpur. The government was quick to stress that the violence was due to a land dispute and was not a racial riot. Still, the government warned Saturday's rally-goers not to make any provocative statements that could fan racial tensions. 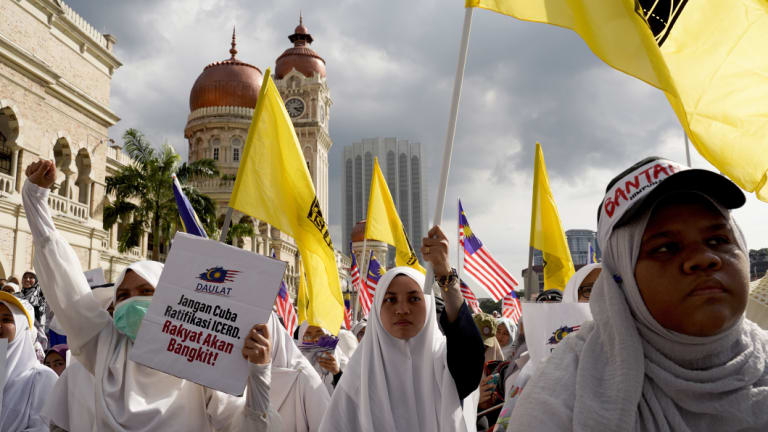 The Malaysian government warned protesters not to stir racial tensions with inflammatory statements.Credit:AP

Mahathir said the government allowed the rally as part of democracy, but warned against any chaos. The rally was held under tight police security, but ended peacefully after rain started to fall.

Former Prime Minister Najib Razak, who has been charged with multiple counts of corruption, was among opposition MPs at the rally.

Police said there were at least 55,000 people on the streets. Many wore white T-shirts and headbands with the words "Reject ICERD", referring to the UN treaty – the International Convention on the Elimination of All Forms of Racial Discrimination.