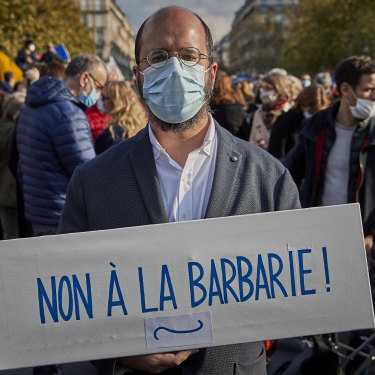 Thousands of people turned out to show solidarity and express their support for freedom of speech in the wake of the shocking murder of teacher Samuel Paty.Credit:Getty Images

Earlier this month, Emmanuel Macron was driven from central Paris to Les Mureaux, a middle-class suburb not far from where police commander Jean-Baptiste Salvaing was knifed to death by a terrorist in 2016. The attacker, 25-year-old French-born Larossi Abballa, then forced his way into Salvaing's home and slit the throat of his partner Jessica Schneider. The couple's three-year-old son was in the house, too, but escaped unharmed — physically, at least.

The French President arrived with a speech in hand which now reads like a prescient message. In his unusually blunt address, Macron warned some of the country's six million Muslims were constructing a "counter society" or "parallel order" which circumvented the Republic's traditions and laws and created the perfect incubator for radicalisation.

The biggest fears were for the outer suburbs of Paris. Some 170 people in the area surrounding Les Mureaux alone were being monitored for violent radicalisation and 70 others have already gone to fight in Syria.

Abdoullah Anzorov wasn't on that watchlist. A fortnight after Macron's speech, the 18-year-old Chechen-Russian went to a school in the nearby commune of Conflans-Sainte-Honorine and beheaded Samuel Paty, a 47-year-old teacher who had discussed caricatures of the prophet Muhammad during a lesson on free speech. Anzorov, who was apparently not known to intelligence services, posted a photo of the severed head on Twitter before being shot dead by police. 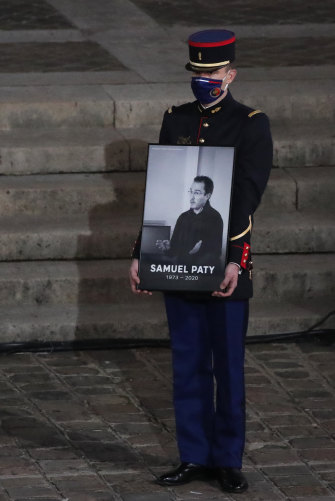 A Republican Guard holds a portrait of slain school teacher Samuel Paty during a memorial service in Paris.Credit:AP

Macron knows France has a problem with extremism and has given himself the potentially impossible task of reversing a trend which by his own admission had taken decades to develop, often through negligence by the state. Macron pinpointed highly concentrated social housing as a key policy failure.

"We ourselves have built our own separatism," he said. "It's the separatism of our neighbourhoods, it's the ghettoisation which our republic – initially with the best intentions in the world — has allowed to occur. We've crowded people together often according to their origins and their social backgrounds. We've concentrated educational and economic difficulties in certain districts.

"What the republic no longer provided … those organisations promoting radical Islam systematically took over from them. And so they built their project on the basis of our withdrawal and sometimes our cowardice."

Foreshadowing a new package of measures to be put to parliament in December, Macron pledged to break up social housing, punish local officials who let religion influence the management of public spaces, end the training of French imams outside the country, incentivise mosques to reduce their reliance on foreign funding, and implement "anti-coup" legislation to prevent "hostile takeovers" of moderates in charge of mosques. The goal is to build an Islam "compatible with Enlightenment values".

Some of the biggest changes focus on schools. More than 50,000 children are now homeschooled. In late September, authorities found a makeshift "school" in Seine-Saint-Denis, a troubled area north-east of Paris. Macron said the building had nearly no windows and the children were greeted each day by women wearing the niqab.

"When you ask them, you find out that their education consists of prayers and certain classes," he said. "That's a fact. We must look at it and call it what it is." 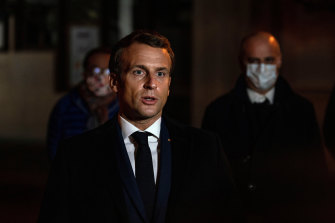 In what he dubbed one of the most radical decisions taken since the country's public school system was created in 1882, Macron announced homeschooling would be banned from 2021, with exceptions only granted on strict health grounds. As a carrot to encourage attendance, the teaching of Arabic in public schools will be expanded.

More measures have been announced amid the fallout of last week's attack. Prime Minister Jean Castex will draft a bill to outlaw endangerment on social media after investigators alleged that a parent of a student at Paty's school had exchanged WhatsApp messages with Anzorov and posted videos identifying the teacher. The amended laws would make it an offence to endanger someone by posting personal details about them online.

Authorities also closed the Grand Mosque of Pantin for sharing critical videos of Paty before last Friday's attack. The Cheikh Yassine Collective, named after an assassinated founder of Hamas, has been forcibly disbanded and its leader detained for questioning.

On Islam, Macron now considers no topic "taboo". However, in his new quest to protect the state from religious influence, Macron risks using that state to trample on freedom of religion and association.

He joins a long line of European leaders promising to tackle extremism. They must walk a fine line between confronting an obvious problem but doing so in a way which does not stir up potential jihadists on watchlists or unfairly demonise the vast majority of peaceful Muslims.

"The underlying idea of the President is that the more you have religious conservative values, the more you are prone to become violent. That is not substantiated by facts," said Olivier Roy, a professor at the European University Institute in Florence and one of France's top experts on Islam.

"Most of the decisions which are aimed at the Muslims will play negatively for conservative Catholics, evangelicals and Jews who do not like state control over religious groups." 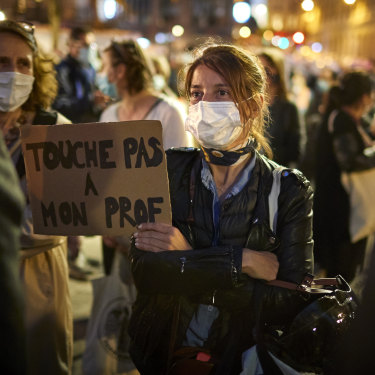 A woman holds a sign reading "Do not touch my teacher" during a national tribute to Samuel Paty in Paris. Credit:Getty Images

France is home to western Europe's largest Muslim minority — about 9 per cent of its total population of 66 million. Macron did not condemn all of them in his October 2 speech, but his language this month has been sharper than usual. For example, he bordered on overreach by claiming Islam was a religion "currently experiencing a crisis all over the world".

Human rights groups and other activists fear Macron's crackdown threatens to alienate moderate Muslims, the West's most effective allies in countering radicalisation. This was a strong theme of former Australian prime minister Malcolm Turnbull, who regularly defended moderate Islam and its leaders.

Macron has also been accused of pandering to the right ahead of next year's presidential elections and a likely bid for the Elysee Palace by far-right figure Marine Le Pen. The centrist Macron will need the support of right-leaning voters if he is to secure a second term.

Politics may be at play but Macron does seem to approach the issue with convictions and a genuine desire to stop the bloodshed.

The murder of Paty also hit close to home: the President's wife, Brigitte, is a teacher. It was this profession Macron invoked during a national memorial service on Wednesday in which Paty was posthumously awarded France's highest civilian award, the Legion d'honneur.

"This evening I want to speak of a son. A brother. An uncle. A man that you loved. A father. A teacher. A man who was cut down because he chose to teach. A man who was murdered because he decided that it was up to him to teach his students how to become citizens.