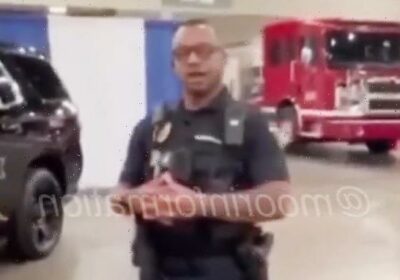 A black Louisville cop was fired after he filmed a parody recruitment video telling people they can ‘kill for free’ while mocking Breonna Taylor’s death.

Turhan Knight, a corrections officer since 2018, was terminated from his position on Thursday after city officials learned of the video in which he mocked the death of the 26-year-old black woman.

She was killed while she slept on March 13, 2020, when police conducted a no-knock raid and burst into her apartment, shooting off 32 shots — six of which struck Taylor, killing her.

The video shows Knight in his full uniform walking past a row of police vehicles at the Kentucky State Fair, as he tells those watching: ‘I’d like to talk to you today about coming in, join our team to answer the call.

‘Brother, we need you,’ Knight continues in the video, noting: ‘We’re going through many ups and downs in the city, trying to repair broken relationships.

‘And brother we need you,’ he repeats, ‘and that’s what we put on our trucks – we need backup.

‘Answer the call, be a part of a great, great police department,’ he says. ‘Never mind what happened to Breonna Taylor, we killed that b****.’

‘Do you want to kill people and be able to get off for it?’ he continues. 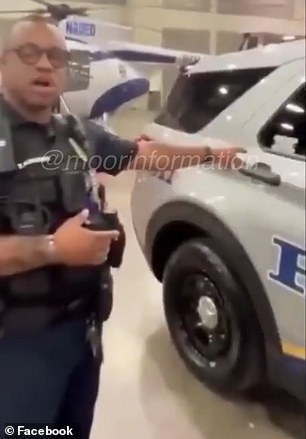 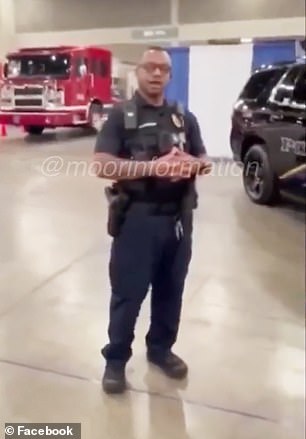 Turhan Knight, a corrections officer since 2018, was terminated from his position on Thursday after city officials learned of a video he posted online, in which he tells people they could ‘kill people and be able to get off for it’

‘There is zero excuse for his insensitivity,’ the mayor said in a statement. ‘He has brought great shame upon Metro Corrections and all of Louisville metro government. 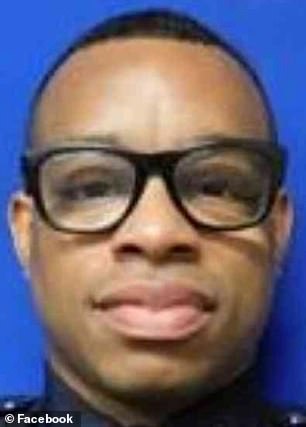 Knight is retaining a lawyer in his termination  hearings, saying the video was meant to be a joke based on his feelings about how ‘some officers handled past situations’

‘I deeply apologize to the family of Breonna Taylor and all of the hard working and ethical employees of Louisville metro government,’ he continued. ‘One person will not tarnish the good work we attempt to do on behalf of our residents.’

And a statement from Metro Corrections confirmed the jail fired him as soon as officials were able to confirm the video existed and watched it themselves.

‘Director [Jerry] Collins was disgusted by the content of the video, and moved as quickly as possible to terminate,’ the statement to the Courier Journal read.

‘Knight’s behavior is unacceptable and does not reflect the professionalism and spirit of service that we strive for at LMDC.’

Meanwhile, Taylor’s mother, Tamika Palmer, decried the video in a statement to WDRB.

‘I think the video is in very poor taste and am disgusted that he thought a joke about my daughter’s death was a laughable moment,’ she said.

‘It continues to show me that LMPD and those who work with them have no regard for their criminal actions against my daughter and continue to disrespect me and my family.’

The local police union has now said it will not be defending Knight in his termination hearings, with Daniel Johnson telling the Journal: ‘The video was absolutely horrible, and there is no place in uniform for anyone that would do something so insensitive.

‘We believe the termination was absolutely justified and was the right decision,’ he said, adding: ‘Knight’s views and opinions of LMPD does not reflect those of FOP Lodge 77.’

But speaking to the Journal, Knight said he posted the video online after putting in his two-week notice — and Friday was supposed to be his last day on the force anyway.

He said the video was a joke based on his feelings about how ‘some officers handled past situations,’ the Journal reports, and he never meant to offend Taylor or her family, noting that he ‘has close times with the family of Kenneth Walker,’ Taylor’s boyfriend who was with her at the time of the shooting.

Knight then sent the newspaper an additional statement over the weekend, saying: ‘I should have received punishment, I don’t deny that, but blatant lies told against me to look good for media purposes is just wrong.

‘I hope that I can be forgiven, I pray I will,’ he said in the statement. ‘I made a terrible decision, there aren’t enough apologies that I can give right now, but I am deeply remorseful.’

Knight added that he is planning to hire a lawyer to represent him in his termination hearings. 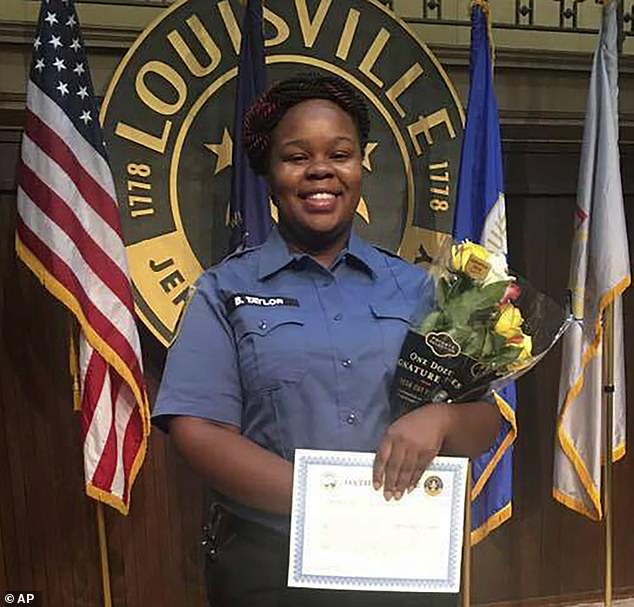 Breonna Taylor, a 26-year-old emergency medical technician, was asleep with her boyfriend on March 13, 2020, when police conducted a no-knock raid and burst into her apartment, shooting and killing her 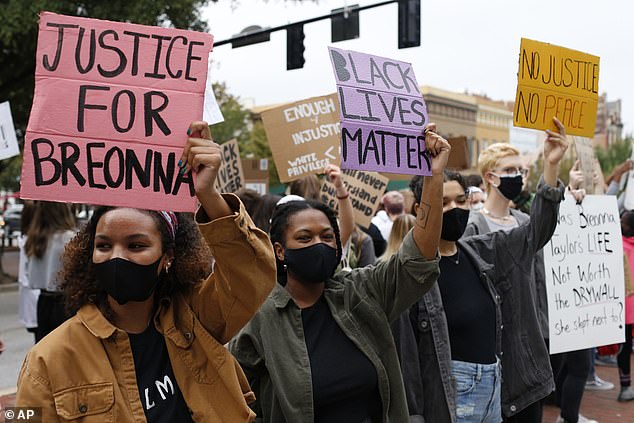 The killing of Taylor, along with other 2020 killings of George Floyd in Minneapolis and Ahmaud Arbery in Georgia, among others, sparked outrage and galvanized protests that peaked in intensity during that summer

The killing of Taylor, along with other 2020 killings of George Floyd in Minneapolis and Ahmaud Arbery in Georgia, sparked outrage and galvanized protests that peaked in intensity during that summer.

Kelly Goodlett, Joshua Jaynes and current Sergeant Kyle Meany were accused of falsifying a search warrant before and after she was killed, while former Det. Brett Hankison was charged with civil rights violations for allegedly using excessive force. 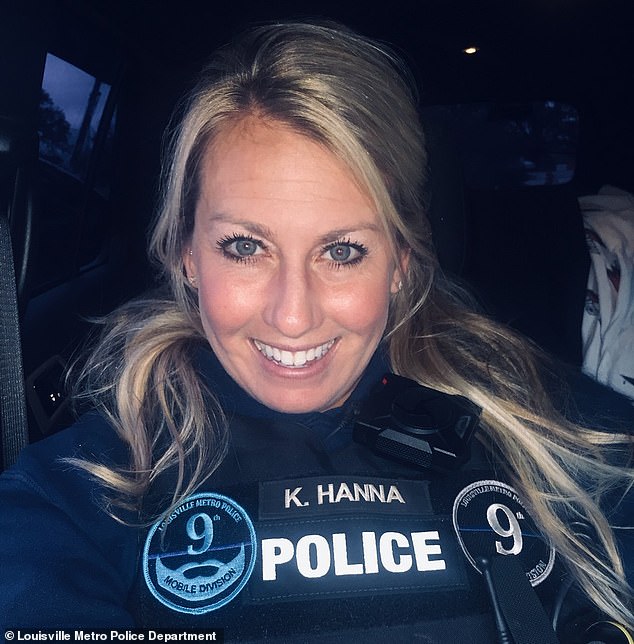 Kelly Goodlett, 35, pleaded guilty in federal court on Tuesday to helping falsify a search warrant that led to the March 2020 killing of Breonna Taylor 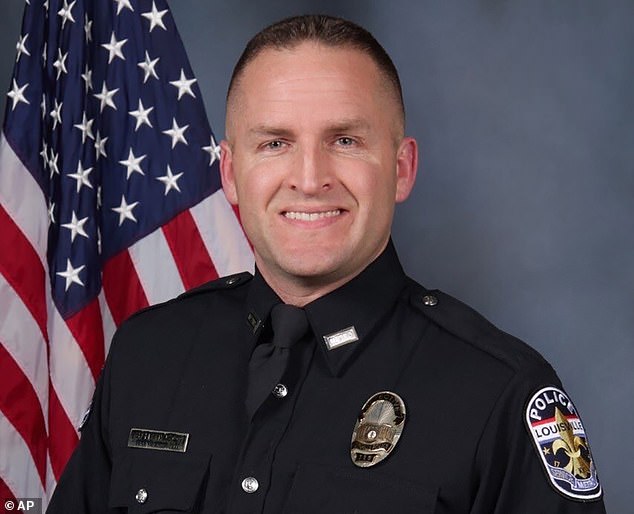 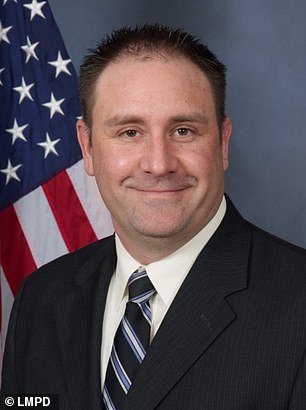 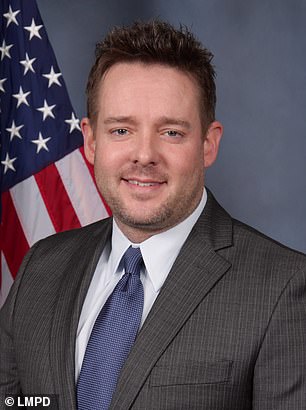 In March, a jury acquitted Hankison on a charge of wanton endangerment. A grand jury earlier cleared the other two white officers who shot Taylor but charged Hankison with endangering neighbors in the adjacent apartment.

A grand juror on the case later said Kentucky Attorney General Daniel Cameron only presented the wanton endangerment charges against Hankison to the grand jury.

Kentucky Attorney General Daniel Cameron failed to charge Mattingly and Cosgrove with a crime last year, saying that both cops were justified in returning fire against Walker.

But last week Goodlett, 35, entered a plea deal saying she met Jaynes just days after the shooting in a garage, where they agreed on a false story to cover up the fake evidence they submitted to justify the botched raid.