They may not be in military dress, but the drag queens calling two-up at the Kings Cross Hotel on Monday are no less reverential about Anzac Day.

Tomi, whose drag queen name was given by Lindsay Lohan’s publicist, said the Anzac Day tradition of two-up was an opportunity for people to unite in celebration of an important day in Australian history. 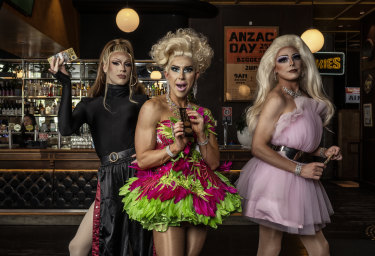 Drag queens Fairah, Tomi and Paris will be hosting two-up on Anzac Day at the Kings Cross Hotel.Credit:Louie Douvis

“I love seeing how competitive people get,” Tomi said. “The atmosphere is gripping.”

Tomi will be joined by fellow drag queens Paris and Fairah to host two-up at the Kings Cross Hotel from midday on April 25 – one of many venues that will host the traditional gambling game on Anzac Day.

“Everybody loves drag queens,” Paris said. “We take playing two-up to the next level. We are loud, camp, beautiful and keep the atmosphere light, fun, exciting and inclusive.” 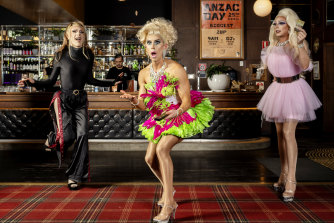 Tomi (centre) said the Anzac Day tradition of two-up was an opportunity for all Australians to honour military personnel.Credit:Louie Douvis

“We are confident, proud – camp, obviously – and a little crude from time-to-time,” she said. “Drag is about spreading love and joy to others and I think it will add that extra bit of flair to two-up.”

The gambling game is also serious business. Two-up relies on the art of the toss, with the coins required to flip off the kip, go above head height and land without obstacles.

Heads or tails, the majority wins in two-up. The spinner – person who flips the coins – is chosen by the drag queens who make final call on whether the toss is valid.

Tomi said there was a personal element in being part of Anzac Day as a drag queen.

“Having queens running a game like two up on Anzac Day reminds us of just how far we have come as a nation, building tolerance, love and acceptance,” Tomi said.

Like many Australians, Tomi has family members who have served in the Australian military, including a grandfather during World War Two and a great uncle in Vietnam.

“It’s a reminder that there were many LGBTQ+ soldiers who sacrificed themselves for our country,” Tomi said. “There are many faces to the people that fought, and we are a reminder of that.”

“Ever since I was a small child I have attended dawn services, to watch my family march [and] commemorate Anzac day and service people,” Paris said.

“It’s something I hold close to my heart.”