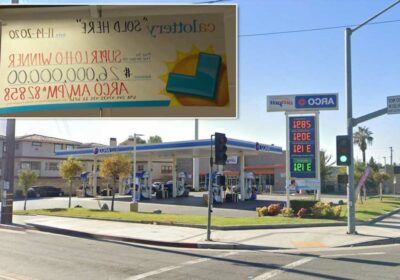 This is not the best way to launder money.

A lotto winner who bought a winning $26 million SuperLotto Plus ticket at a California gas station last year accidentally washed away her winnings with the laundry, according to KTLA.

The unidentified woman had until Thursday to claim her prize, and speculation about the unclaimed fortune made national news in recent days.

The manager of the Arco AM-PM outside of Los Angeles — who only gave his name as Frank to KTLA — told the station that surveillance video showed a regular customer buying the golden ticket in November.

On a recent visit to the business, the woman, who is in her 40s, told Frank she inadvertently washed away the fortune, according to the station.

Surveillance footage of the transaction was recorded over by the gas station, according to the outlet. However, even if it was intact, the footage would not be sufficient evidence for a payout.

If the prize is unclaimed, a one-time payout of $19.7 million will go to California’s public schools, according to the state’s lottery.

More than one billion dollars in unclaimed prizes have been given to Golden State schools, officials said.