Washington: The Trump administration has criticised China's decision to expel three Wall Street Journal reporters – including an Australian journalist – for what China claims was punishment for a racist headline on an opinion article.

Philip Wen, the former China correspondent for The Sydney Morning Herald and The Age, was among the reporters whose credentials were revoked and who were ordered to leave the country within five days.

The decision came just a day after the US State Department designated five state-owned Chinese media outlets as "foreign missions", which requires them to provide more information to the US government than other foreign media outlets.

The tit-for-tat over journalism represents a new source of tension for the two superpowers, adding to the disputes over trade barriers and technology. 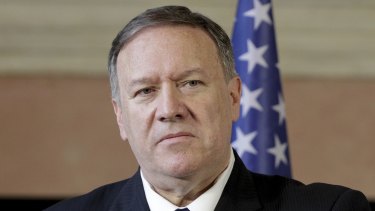 The Chinese government took umbrage at a February 3 opinion article about China's response to the coronavirus that described the country as the "sick man of Asia".

None of the reporters who have had their credentials revoked had any involvement in the opinion piece.

"The correct response is to present counter arguments, not restrict speech. The United States hopes that the Chinese people will enjoy the same access to accurate information and freedom of speech that Americans enjoy."

In announcing its decision, the Chinese Foreign Ministry said: "The Chinese people do not welcome those media that speak racially discriminatory language and maliciously slander and attack China.”

The Global Times, a newspaper published by the Chinese Communist Party, wrote: "The phrase upset Chinese people because it is linked to a period when the country was brutally bullied and humiliated by the Western imperial powers.

"The parallel to this would be the Chinese media using the 'N' word to describe African Americans. How will they react? No one will believe that we were being well-intentioned."

The paper said that The Wall Street Journal profited from its reporting activities in China.

"Thus, we have every reason to ask them to be friendly in their reporting," it said. "This doesn't mean that they must praise China, but they must report objectively…The WSJ is an elite in the mainstream US media. The newspaper flaunts its professionalism, which should have been reflected in their words and an accurate grasp of all content."

In an editorial on Thursday (Friday AEDT) the Journal said: "This week the excuse for expulsion is an opinion headline. Soon enough it might be a news story about China’s internment camps for Uighurs in Xinjiang or an editorial about Hong Kong.

What Chinese officials don’t understand is that a free press would have helped them better cope with the virus fallout.

"Democracies are resilient because a free media sends signals and information that allow an outlet for grievances and alert leaders to problems before they become crises."

The paper's editorial board also said it believed China's decision was influenced by the US State Department' decision this week to designate five Chinese state-run media organisations as foreign missions.

The outlets are the Xinhua News Agency, the China Global Television Network, China Radio International, the China Daily Distribution Corporation and Hai Tian Development USA, which publishes the People’s Daily in the US.