Life WON’T suddenly return normal with a vaccine and distributing it could take a YEAR, warn scientists who argue that restrictions should only be gradually relaxed

Life won’t suddenly go back to normal with a vaccine, and distributing it could take a year, scientists have warned.

The experts argue that restrictions should only be gradually relaxed over the coming months until herd immunity has been achieved.

The claims come in a new report from the Royal Society, which warns people have to be ‘realistic’ about what vaccines could achieve and the hurdles facing a mass roll-out.

It said that even if a cure is ready to be distributed by the spring, it would take several months to vaccinate enough people and allow old normal routines to return. 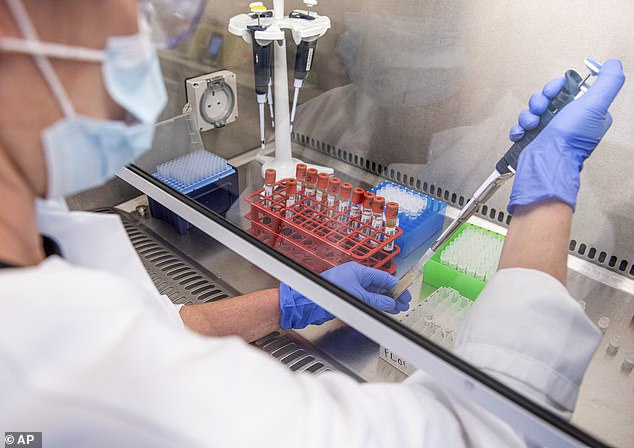 Life won’t suddenly go back to normal with a vaccine, and distributing it could take a year, scientists have warned. Pictured: The vaccine trials in Oxford

Care home residents and staff will be the first to get a Covid-19 vaccine when one is approved, according to fresh government advice.

Everyone over the age of 80 and NHS staff will be second in line, updated guidance from the Joint Committee on Vaccination and Immunisation states.

The body, which consists of 20 top scientists, advises ministers on all vaccines. It admitted its guidance for any UK Covid-19 vaccination scheme is likely to change in the future.

Matt Hancock previously pledged that Britons with underlying conditions would be near the front of the queue for any jab. But millions living with heart disease or other ailments that raise their risk of dying of Covid-19 won’t be vaccinated until everyone over the age of 65 is inoculated, according to the new guidance.

WHO WILL GET A COVID-19 JAB FIRST?

Under the proposed ranking by the Joint Committee on Vaccination and Immunisation, the vaccines will be rolled out in the following order:

One of the report’s authors, Charles Bangham, chairman of immunology at Imperial College London, said: ‘Even if it is effective, it is unlikely that we will be able to get back completely to normal.

‘There’s going to be a sliding scale: even after the introduction of a vaccine that we know to be effective, we will have to gradually relax some of the other interventions.’

There are currently more than 200 vaccines being developed globally, with dozens of these at clinical trial stage.

The Government’s chief scientific adviser Sir Patrick Vallance said last week that there was a chance we could see one before Christmas but it was more likely to arrive next year.

That will have also played a part in Boris Johnson’s suggestion that coronavirus restrictions will need to be in place until March.

Several challenges are highlighted in the Royal Society report, including the need to inject people with RNA, a type of genetic material, in some of the most promising studies, even though an RNA vaccine has never been produced at a large scale.

Questions also remain over supply chains, with some vaccines having to be kept at -80C while being transported.

Furthermore, as much as 80 per cent of the population may have to be innoculated to achieve herd immunity, even if a vaccine proves to be 90 per cent effective in reducing transmission.

Professor Nilay Shah, the head of the department of chemical engineering at Imperial College London, and another of the report’s authors, said: ‘It will take a long time to work through the different priority groups, so it is not a question of life returning to normal in March, even with all the things having a following wind and passing all those hurdles.

‘We may be able to start the process in March, but to get through that vaccination it’s many months, maybe more than a year. We need to recognise that we are trying to do something that has never been done before.

‘We need to vaccinate at around 10 times the rate of the flu vaccination programme, and thousands of people will need to be retrained. That needs to be communicated clearly so that the expectations are realistic, because they do relate back to [lockdown restrictions] that we will need to make for many months ahead.’

Prof Shah added that some 20,000 people would need to be recruited by the NHS to deliver the drug and that field hospital may have to be built for the mass vaccination programme. 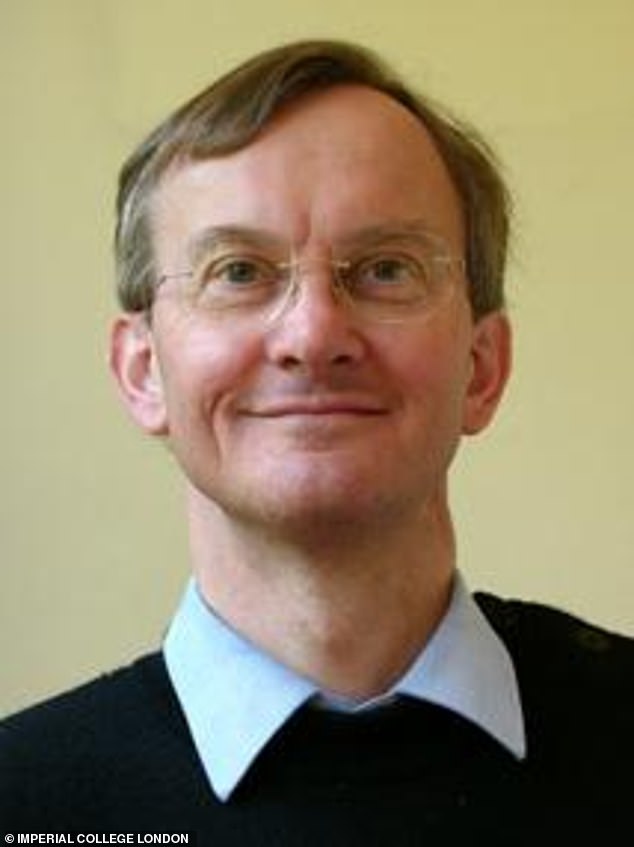 One of the report’s authors, Charles Bangham, pictured, chairman of immunology at Imperial College London, said: ‘Even if it is effective, it is unlikely that we will be able to get back completely to normal’

The report comes after scientists suggested that Britain’s rising coronavirus infection rate may actually speed up vaccine trials and move the world one step closer to eradicating the disease.

The UK is now well and truly in the midst of a second wave, with 6,000 new cases every day and hospital admissions doubling every week.

Britons have been told they will need to live with tough new lockdown restrictions for another six months, with ministers banking on a jab being ready by then.

Oxford University’s front-runner vaccine candidate was supposed to be rolled out this autumn but trials came to a standstill when infection rates petered out over summer.

Studies had to be moved abroad to the likes of Brazil, the US and South Africa – where coronavirus was still rife – to test if the jab can prevent infection.

In order to prove beyond doubt a vaccine works, scientists need to inoculate tens of thousands of people then send them back into the community and wait for some to get infected.

This has been a sticking point for the Oxford team because there was barely any Covid-19 transmission for months in the UK. But experts have told MailOnline the one ‘silver lining’ to Britain’s climbing Covid-19 rates is that it could speed up this process.

WHICH VACCINES HAS THE UK SECURED DEALS FOR?

If the vaccine proves successful, the UK could begin to vaccinate priority groups, such as frontline health and social care workers and those at increased risk from coronavirus, as early as the first half of next year, the Department for Business, Energy & Industrial Strategy (BEIS) said.

Human clinical studies of the vaccine will begin in September followed by a phase 3 study in December.

The vaccine is based on the existing technology used to produce Sanofi’s seasonal flu vaccine. Genetic material from the surface protein of the SARS-CoV-2 virus is inserted into insect cells – the basis of Sanofi’s influenza product – and then injected to provoke an immune response in a human patient.

AstraZeneca, which is working in partnership with Oxford University, is already manufacturing the experimental vaccine after a deal was struck on May 17.

Professor Sarah Gilbert, who is leading the Oxford team, is confident the jab could be ready for the most vulnerable people by the end of the year.

Her comments came after the results from the first phase, published in The Lancet on July 20, showed promise.

The team have genetically engineered a virus to look like the coronavirus – to have the same spike proteins on the outside – but be unable to cause any infection inside a person. This virus, weakened by genetic engineering, is a type of virus called an adenovirus, the same as those which cause common colds, that has been taken from chimpanzees.

US drug giant Pfizer – most famous for making Viagra – and German firm BioNTech were revealed to have secured a deal with the UK Government on July 20.

It reported positive results from the ongoing phase 2/3 clinical trial of one called BNT162b1 on July 1.  The company is still running phase 2 trials at the moment.

Pfizer’s vaccine is one called an mRNA vaccine, which do not directly inject bits of the virus into the body but send genetic material.

mRNA vaccines programme the body to produce parts of the virus itself by injecting the body with a molecule that tells disease-fighting cells what to build. The immune system then learns how to fight it.

The Government has given Valneva — whose vaccine is understood to be in the preclinical stages of development — an undisclosed amount of money to expand its factory in Livingston, Scotland.

While the Government revealed a 60million dose deal on July 20, the company said it had reached agreement in principle with the UK government to provide up to 100million doses.

Valneva’s jab is an inactivated whole virus vaccine, meaning it injects a damaged version of the coronavirus itself into the body.

The virus has been destroyed in a way that makes it unable to cause infection, but the body still recognises it as a dangerous intruder and therefore mounts an immune response which it can remember in case of a real Covid-19 infection.

The Government has agreed to buy 30million doses of a vaccine made by Janssen if it works.

Officials have agreed to help the company in its development of the jab by part-funding a global clinical trial. The first in-human trials of Janssen’s jab began in mid-July and are being done on adults over the age of 18 in the US and Belgium.

The jab is named Ad26.COV2-S, recombinant, and is a type of jab called a viral vector recombinant vaccine.

Proteins that appear on the outside of the coronavirus are reproduced in a lab and then injected into the body to stimulate an immune reaction.

The ‘Ad’ part of the vaccine’s name means it works using an adenovirus – a virus best known for causing the common cold – as a vehicle to transport the coronavirus genetics into the body.

Britain has ordered 60million doses of a vaccine being developed by the US-based company Novavax. It will help to fund late-stage clinical trials in the UK and also boost plans to manufacture the vaccine in Britain.

It produced an immune response in 100 per cent of people who received it, the company said, and was safe and ‘generally well-tolerated’.

Novavax’s candidate is also a recombinant vaccine and transports the spike proteins found on the outside of the coronavirus into the body in order to provoke the immune system.

Imperial College London scientists are working on Britain’s second home-grown hope for a jab. The candidate is slightly behind Oxford’s vaccine in terms of its progress through clinical trials, but is still a major player.

The UK Government is understood to have agreed to buy the vaccine if it works but details of a deal have not yet been publicised.

Imperial’s jab is currently in second-phase human trials after early tests showed it appeared to be safe.

Imperial College London will try to deliver genetic material (RNA) from the coronavirus which programs cells inside the patient’s body to recreate the spike proteins. It will transport the RNA inside liquid droplets injected into the bloodstream.