Home » World News » ‘Life is pretty good’: The Aussies who don’t want to come back from Bali

‘Life is pretty good’: The Aussies who don’t want to come back from Bali

Singapore: Michael Lenihan is sitting in a cafe overlooking Bali’s Sanur Beach, halfway through a business meeting with a colleague.

“We’re having lunch and there is beautiful surf at the front and people are walking along the beach and enjoying the sun,” he says. 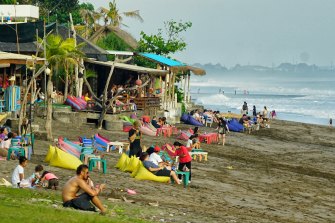 Batu Belig Beach, one of the most well-known beaches in Canggu, remains popular.Credit:Amilia Rosa

“Everybody’s moving around but they’re being respectful with their masks and their social distancing.”

The owner of a foreign investment company on the island returned to his home town of Melbourne last year when alarm bells rang as the first wave of the virus struck Indonesia. 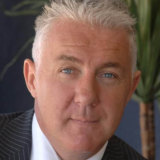 Victorian Michael Lenihan is among the large contingent of Australians remaining on Bali who have no desire to leave.  Credit:

But after seven months in Victoria, the majority in lockdown, he flew back last November.

Now, while some expats are appealing for help to get to Australia amid Indonesia’s worst outbreak, Lenihan, who fell ill with COVID-19 in May, is among the large contingent of Australians remaining on Bali who have no desire to leave.

Its tourism industry might have been crushed but tens of thousands of foreign nationals are still enjoying the laidback lifestyle on the holiday island, with the added bonus of zipping around on motorcycles in far lighter traffic than usual.

Locals and foreigners soak up life by the beach in Bali last week.Credit:Amilia Rosa

Tourist beaches are technically closed under current restrictions, but most actually remain open and are frequented by surfers and others enjoying the sand and sun.

Kuta and Legian are quiet, but in the Canggu area in particular, where many of the more than 100,000 foreigners in Bali have been spending their time, a majority of restaurants, cafes and hotels are operating. 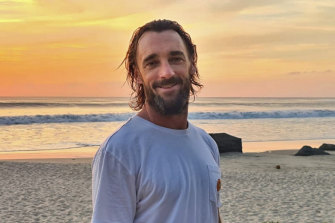 The island, which was visited by 1.3 million Australians in 2019, hasn’t been immune from the devastating wave of the virus that has swept through Indonesia in the past two months, making the country the new epicentre of the pandemic.

New daily infections have risen to more than 1000 and the official virus death toll now exceeds 2000, with as many as 44 passing away in a day over the past week. As hospital bed occupancy has risen to 75 per cent, Bali Governor Wayan Koster has begun having oxygen produced in the province in an effort to ensure it does not suffer from the kind of catastrophic shortfalls that have occurred elsewhere in Indonesia.

‘The type of people that live here are people that love Indonesia because it feels more like a free country.’

But while Bali is struggling to contain the current surge, and its economy has taken a beating, it is advantaged by having been prioritised in Indonesia’s vaccine rollout in an effort to reboot tourism. It has administered at least one vaccine dose to 3 million people, or 70 per cent of the population, while nearly 1 million have had both shots.

Frank Andrews, a Victorian who has been on Bali for 20 years and owns an agency that helps foreigners to obtain visas, says the grim picture painted of life there for expats at the moment doesn’t match reality.

“The way you hear it is there are roadblocks everywhere. There are only two roadblocks on the whole island,” he said.

Canggu cafes and restaurants remain active as businesses in Kuta and Legian have largely closed.Credit:Amilia Rosa

“At the present stage if you were marking my life out of 10, I’m living a 7.5 or 8. It’s a pretty good life compared to our counterparts in Sydney and Melbourne.

“Apart from wearing a mask, which I’ve got used to, life is pretty good.”

Not everyone has been as observant of such COVID-19 regulations. Since the virus first took hold last year, there has been no shortage of local headlines and television news stories about foreigners flouting the rules.

The list of culprits is reportedly headed by Russians, whose numbers are unmatched by other nationalities after a recent influx, among them digital nomads working for fintechs. 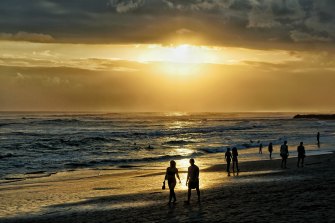 Beaches are still being frequented despite technically being closed.Credit:Amilia Rosa

The most noteworthy exiled were two Russian and American-Taiwanese social media influencers who breached protocols when one filmed the other walking into a supermarket with a painted-on mask.

However, “99 per cent of us are doing the right thing”, Andrews says.

Masks are also a way of life on Lombok, a 20-minute flight to the east of Bali, but they haven’t stopped Australians from living it up there as well as they ride out the pandemic.

Tom Merrett, who runs a real estate company there, has been able to continue enjoying such outdoor hobbies as golf and surfing and has travelled around Indonesia for much of the past year.

“I have been able to fly around Indonesia and enjoy some truly memorable surfing trips to places like the Mentawais this past year,” he said.

Merrett, from Sydney’s northern beaches, feared the pandemic would be a major blow for his business but says it has improved.

“Short-term package tourism has obviously taken a big hit, but the longer term trend of people being able to relocate to these places and work remotely is filling the void,” he said.

“People in expensive cities like Singapore or Sydney, for example, which is a big part of my customer base, they are in lockdown and are wondering whether a big city is worth it for them, and they’re purchasing land in Lombok with a view to working remotely in the future.”

With visas having been extended by the Indonesian government and vaccines accessible in the drive to have international tourism resume in Bali, Merrett says it’s little wonder that expats are eager to stay rather than go back to living in what many viewed as a “a nanny state” before the pandemic in Australia.

“The type of people that live here are people that love Indonesia because it feels more like a free country. More like the Australia many of us grew up in, in some respects.

“And to be honest, with the Indonesian government stepping in to provide foreigners with vaccines, we feel it has looked after us, which is certainly a feeling we don’t have for the Australian government.”