Home » World News » ‘Liberating’: Dr Fauci is back and in step with White House 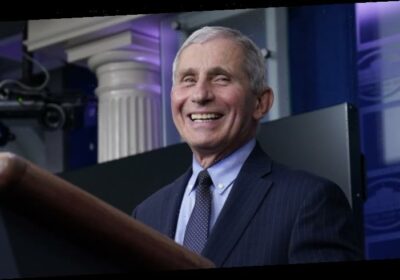 Washington: Dr Anthony Fauci is back.

In truth, the Unites States’ leading infectious-diseases expert never really went away. But after enduring nearly a year of darts and undermining comments from former president Donald Trump, Fauci now speaks with the authority of the White House again.

The director of the National Institute of Allergy and Infectious Diseases called it “liberating” to be backed by a science-friendly administration that has embraced his recommendations to battle COVID-19. 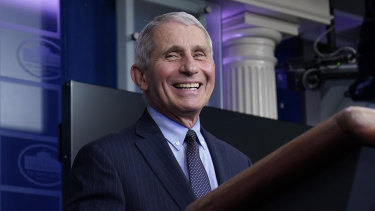 Fauci made clear that he believed the new administration would not trade in the mixed messages that so often came from the Trump White House, where scientific fact was often obscured by the president’s political agenda.

“The idea that you can get up here and talk about what you know and what the science is […] it is something of a liberating feeling,” Fauci told reporters. White House press secretary Jen Psaki had invited Fauci to take the podium first at her daily briefing.

While choosing his words carefully, Fauci acknowledged that it had been difficult at times to work for Trump, who repeatedly played down the severity of the pandemic, refused to consistently promote mask-wearing and often touted unproven scientific remedies, including a malaria drug and even injecting disinfectant.

“It was very clear that there were things that were said, be it regarding things like hydroxychloroquine and other things, that really was uncomfortable because they were not based in scientific fact,” Fauci said. He added that he took “no pleasure” in having to contradict the president, a move that often drew Trump’s wrath.

Biden, during his presidential campaign, pledged to making Fauci his chief medical adviser when he took office, and the 80-year-old scientist was immediately in motion.

Fauci was up well before dawn for the virtual meeting with the organisation, which Biden had rejoined the previous day after Trump withdrew the US from the group out of anger over how it dealt with China in the early days of the pandemic. Fauci told the WHO that the US would join its effort to deliver coronavirus vaccines to poor countries.

In the afternoon, the doctor stood alongside Biden and Vice-President Kamala Harris in the White House as they unveiled a series of executive orders aimed at slowing the spread of the virus, which is killing more than 4000 Americans a day, as well as bolstering the nation’s sluggish vaccine distribution program. 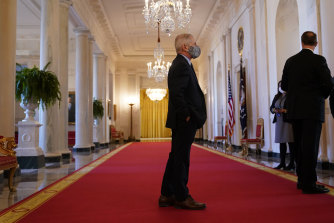 Dr Anthony Fauci stands in a hallway before an event with President Joe Biden on the coronavirus at the White HouseCredit:AP

Fauci had chatted amiably with reporters while awaiting the tardy new President. He acknowledged it was a long day and said that while he’d prefer to go for a run, he planned to powerwalk a few miles in the evening.

It was all a stark contrast after being kept on a tight leash by the Trump administration. Their West Wing press shop had tightly controlled Fauci’s media appearances — and blocked most of them. The doctor went from being a constant presence in the briefing room during the first weeks of the pandemic to largely being banished as Trump grew jealous of the doctor's positive press and resentful of Fauci's willingness to contradict him.

Moreover, Trump frequently undermined Fauci’s credibility, falsely insisting that the pandemic was nearly over. The president regularly referenced Fauci’s early scepticism about the effectiveness of masks for ordinary Americans, a position that Fauci quickly abandoned in the face of more evidence. And he even made fun of Fauci’s first pitch at a Washington Nationals game.

Trump’s attacks on Fauci — and his rejection of the science — handicapped medical professionals trying to get Americans to take the virus seriously.

“There was clear political influence on the message of the pandemic. It became political to say that the pandemic was devastating our community because it was interpreted as a judgement on Trump,” said Dr Nahid Bhadelia, an infectious-diseases physician and a professor at the Boston University School of Medicine. “It actively created enemies of the public health folks in a segment of the population.”

Having Fauci return to a central role, Bhadelia said, is a sign “that science was being repressed and now back.”

As his handling of the pandemic became the defining issue in the 2020 campaign, Trump insisted on portraying the virus as a thing of the past. He also mercilessly attacked Fauci, retweeting messages that called for the doctor’s dismissal and revelled in “Fire Fauci!” chants at some of his rallies.

Trump sidelined Fauci but dared not dismiss him, after aides convinced him of the move’s political danger.

But Fauci, who has now served under seven presidents, persevered, telling friends that he would keep his head down and aim to outlast Trump and the obfuscations of his administration.

“Clarity of message is the most important thing the government can be doing right now; the single biggest disservice Trump did was constantly telling people that pandemic was about to be over,” said Dr. Ashish Jha, dean of the Brown University School of Public Health, who has known Fauci for more than 20 years.

In his return to the briefing room, Fauci joked with reporters, seemingly far more relaxed than at any point last year. And as he stepped off the stage, Psaki said she'd soon have him back.