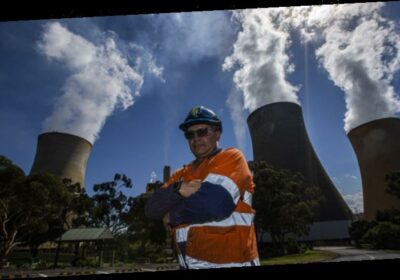 It came as a blow in the Latrobe Valley but little surprise.

EnergyAustralia’s announcement this week it would shut the Yallourn power station four years early underscored the dwindling value of brown coal, as the power giant seeks to phase out high carbon-emitting operations. 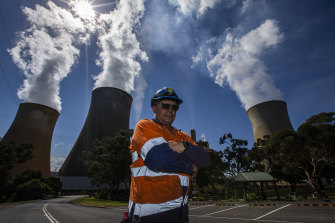 Phill Bramstedt is a contract worker a the Yallourn power station. Credit:Meredith O’Shea

Phill Bramstedt, who works on the belt system at Yallourn, described a “pretty solemn” mood on Wednesday when the company confirmed it would close four years early in 2028.

“A lot of people knew we were next cab off the rank,” he says. “At least they’ve given everybody a warning of what’s going on.”

Coal-fired electricity production, which once provided well-paid jobs to generations of Latrobe Valley families, no longer promises to underpin the region’s economic future.

In the golden age of Victoria’s brown coal industry, the company town of Yallourn had a thriving community with a population of 5000 people made up of workers and their families. 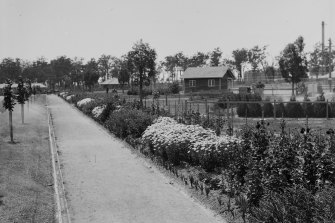 The Yallourn township circa 1930 created to service the coal industry. Credit:State Library of Victoria

Successive governments had been so confident coal would fire the Latrobe Valley’s future that by 1983 the Yallourn township itself was dismantled to make way for a mine to feed the state’s voracious appetite for locally generated electricity.

Yallourn’s earlier end date has prompted calls for EnergyAustralia and other power companies to leave a physical and financial legacy that respects the communities that enabled them to thrive.

EnergyAustralia has pledged to build the world’s biggest battery by 2026 and will spend $10 million to retrain workers as it seeks to rein in carbon emissions.

But the company’s decision to “retire” the plant has again reignited questions about whether there will be enough jobs to sustain future generations of workers and their families in the Latrobe Valley. 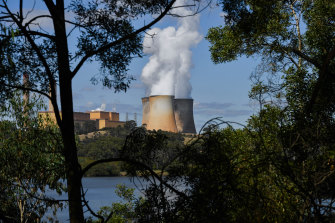 The announcement that Yallourn will shut in 2028 flags the beginning of the end for coal-fired power.Credit:Joe Armao

About 500 EnergyAustralia workers will be affected by the announcement, in addition to many more contractors like Mr Bramstedt.

He believes governments should have prepared for the demise of brown coal long ago.

“They should have invested in greener stations instead of running old stations into the ground.”

Mr Bramstedt fears for the future of his community and his family.

Many local businesses noticed a marked decrease in consumer spending shortly after the snap closure of the Hazelwood power station and mine in 2017.

Electrical Trades Union organiser for the Latrobe Valley, Peter Mooney, says the looming closure of the Yallourn power station, in addition to the demise of other major employers such as the Carter Holt Harvey sawmill, means millions of dollars in wages may stop flowing through local economies.

“I think about how much money we’re going to lose in the community with [Yallourn] shutting down in seven years,” he says.

Mr Mooney points out many promises have been made over the years that major industries would set up in the Latrobe Valley but they often failed to materialise, dashing the community’s hopes of reliable new jobs. 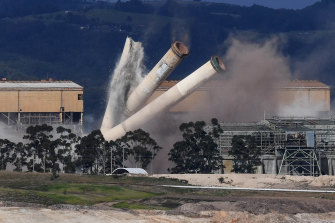 The demolition of the Hazelwood power station in May. Credit:Joe Armao

“Since I was a kid they were saying they’re going to build a magnesium plant.”

But some glimmers of hope remain, including news that a zero emissions hydrogen energy plant has begun operating at AGL’s Loy Yang A power plant in the Latrobe Valley, creating 400 jobs in its pilot phase.

Plans to build a waste-to-energy plant in nearby Maryvale have also raised the prospect of retaining widescale jobs in the region.

But Mr Mooney says these developments are too late for many workers made redundant when the Hazelwood station and mine closed.

Some of them have already moved away to take up jobs elsewhere, he said.

“If there’s no work here they go looking. They go interstate. Their skills are pretty transportable.”

The Victorian government insists it will work with EnergyAustralia, unions and the local community to ensure workers are supported over the seven years until shutdown.

“These workers deserve better,” he says. “The Morrison government needs to invest in their futures over the next seven years, in retraining so they have access to secure, safe and fairly paid work.”

Earlier this week EnergyAustralia managing director Catherine Tanna said closing Yallourn would reduce the company’s carbon dioxide emissions by 60 per cent while insisting it would not abandon the local community.

“EnergyAustralia is determined to demonstrate that coal-fired power can exit the market in a way that supports our people and ensures customers continue to receive reliable energy.”

The Yallourn power station provides 22 per cent of Victoria’s energy, processing 18 million tonnes of brown coal each year from Australia’s second-largest coal mine. 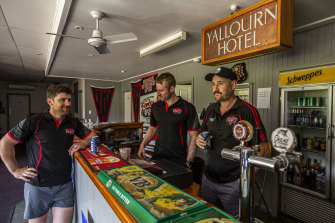 The company also provided a $10,000 grant for female facilities at the club.

The money was crucial particularly when the club was struggling for on-field success.

“They were the single-biggest sponsor for those times when the club was down and out for a little while,” she says.

Ms DeCarli says it will be a significant loss to the community if EnergyAustralia stops supporting local sports clubs and community groups.

She insists the company also has an obligation to build community infrastructure projects such as walking tracks to connect small towns after drawing on the local area’s resources for decades.

Ms DeCarli hopes the company will honour the timeframe it laid out in contrast to the snap decision by energy giant Engie to give just six months’ notice in 2016 when it announced the closure of the Hazelwood power station.

“I saw the impact with Hazelwood. It was devastation when it closed. It was just cruel.”

Voices of the Valley president Ron Ipsen hopes, perhaps optimistically, the Latrobe Valley has a future in clean energy despite its identity being tied to coal for so long.

He says the Latrobe Valley is the right place to build a huge battery in addition to other green energy projects that can tap into the region’s connections to Victoria’s power grid and electricity expertise.

“All power lines in the state lead to the valley,” he says.