A Chinese kindergarten teacher has pinched and isolated a pupil for two hours non-stop after he failed to eat his meal, the boy’s devastated mother has accused.

Security footage shows the educator squeezing the child’s face and body hard in front of his classmates.

She is also seen punishing the youngster away from the class and isolating him with several desks. 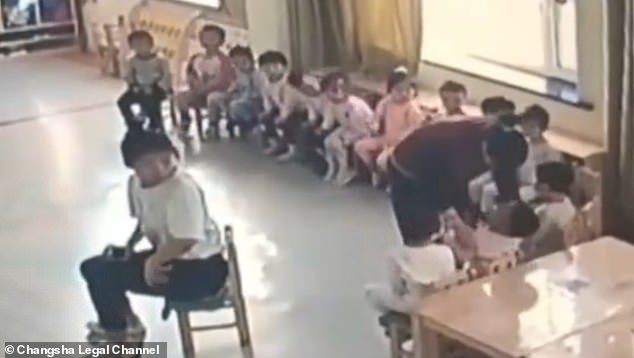 Security footage shows a teacher squeezing a child’s face and body in front of his classmates. The boy’s mother has accused the educator of pinching and isolating her son for two hours

The teacher has been sacked by the kindergarten in northern China’s Changchun amid ongoing police investigations, according to the local education bureau.

The incident came to light after the boy’s mother posted relevant security clips onto social media platforms, sparking an uproar.

The parent had allegedly discovered bruises and swellings around her son’s body while bathing him.

She claimed that her son’s teacher punished him last Friday because he had failed to eat his meal. 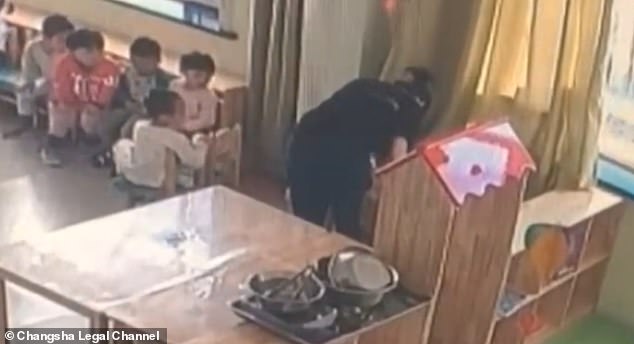 The mother was quoted saying: ‘It’s okay for children not to eat their meals. I have been quite relaxed about the fact. It is normal [that my son doesn’t eat his meals]. You can’t beat my child like this. He is still young.’

The emotional woman then went on to describe how the teacher surrounded her son with four desks in a corner, preventing him from leaving as punishment.

The local police have launched a probe into the allegations, the Kuancheng District Education Bureau of Changchun said. 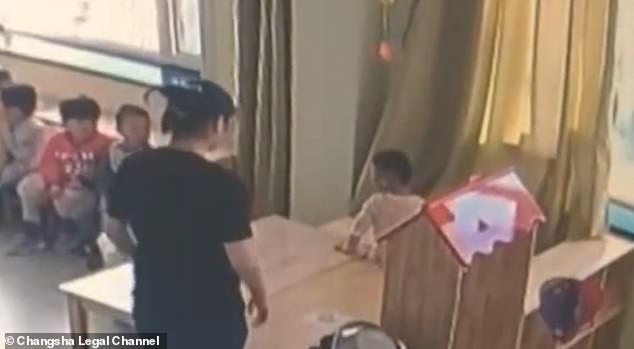 The boy’s devastated mother described how the teacher surrounded her son with four desks in a corner, preventing him from leaving as punishment for not eating his meal in northern China

According to an online statement, the incident took place at the Xinxuedu Kindergarten.

The boy’s mother notified police of the incident on Saturday.

The kindergarten has fired the teacher in question while the police investigation is ongoing.

The education bureau has vowed to deal with the matter ‘accordingly’ based on the results of the police probe.

It has also promised to strengthen its management over kindergartens, step up the moral training for teachers and increase the intensity of day-to-day supervision over education establishments.