Home » World News » Kim Cattrall on moving past 'Sex and the City': 'Saying no to your past is saying yes to your future'

Kim Cattrall on moving past 'Sex and the City': 'Saying no to your past is saying yes to your future'

Kim Cattrall delivered an impassioned speech about saying no.

The actress, who most famously said no to more Sex and the City, talked about the power of refusal at Thursday's Variety‘s Power of Women event.

"I want to share with you something that has been a tremendous help to me over the years in navigating my personal life and managing a career," she said. "In all manners of situations. It's simple, but at the same time it's very complicated. It's a word, and the word is 'no.'"

"I want to share with you something that has been a tremendous help to me in navigating my personal life and managing a career…it's a word. And the word is 'no,'" Kim Cattrall says. https://t.co/qaWghkfthKpic.twitter.com/zQoUYBNbVO

Cattrall — who famously said "no" to reprising her role of Samantha Jones for SATC 3, and didn't get asked to join the And Just Like That...reboot — listed some of the things she's said no to.

"No, that's not for me," she began. "No, I've been there. I've done that. No, I won't be bullied. No, that salary is unacceptable. No, we are not having a meeting in your hotel room. And one of my favorites in particular: No, I don't want to be in a situation for a moment that is not enjoyable."

The last one she uttered in a 2019 interview when talking about turning down the third Sex and the City film. There had been a salary dispute as well as a major falling out with series star Sarah Jessica Parker and others involved in the project. Cattrall claimed she was bullied.

Cattrall told the Women of Power audience that, "'No' helps to find yourself … It can allow you to transition out of one chapter and believe that there will be more exciting chapters to come. Saying no to your past is saying yes to your future because you are the screenwriter in the movie of your own life."

She also said she's "60-friggin'-5 years old," and "when I started my career," as a working actress at 17, "phones had dials, TVs needed antennas and most men in Hollywood thought that 'harass' ['her ass'] was two words. But I have always — and I mean always — I have always known what's right for me and I have followed that gut."

While Cattrall is no longer on speaking terms with some SATC members — Parker said in February she wouldn't be OK working with Cattrall again — she was flanked by several others at the event. Show creator Darren Star introduced her, reading a letter he wrote from fictional Samantha Jones to Cattrall. Costume designer Patricia Field was there and so was Candace Bushnell, whose newspaper column inspired the show in the first place. 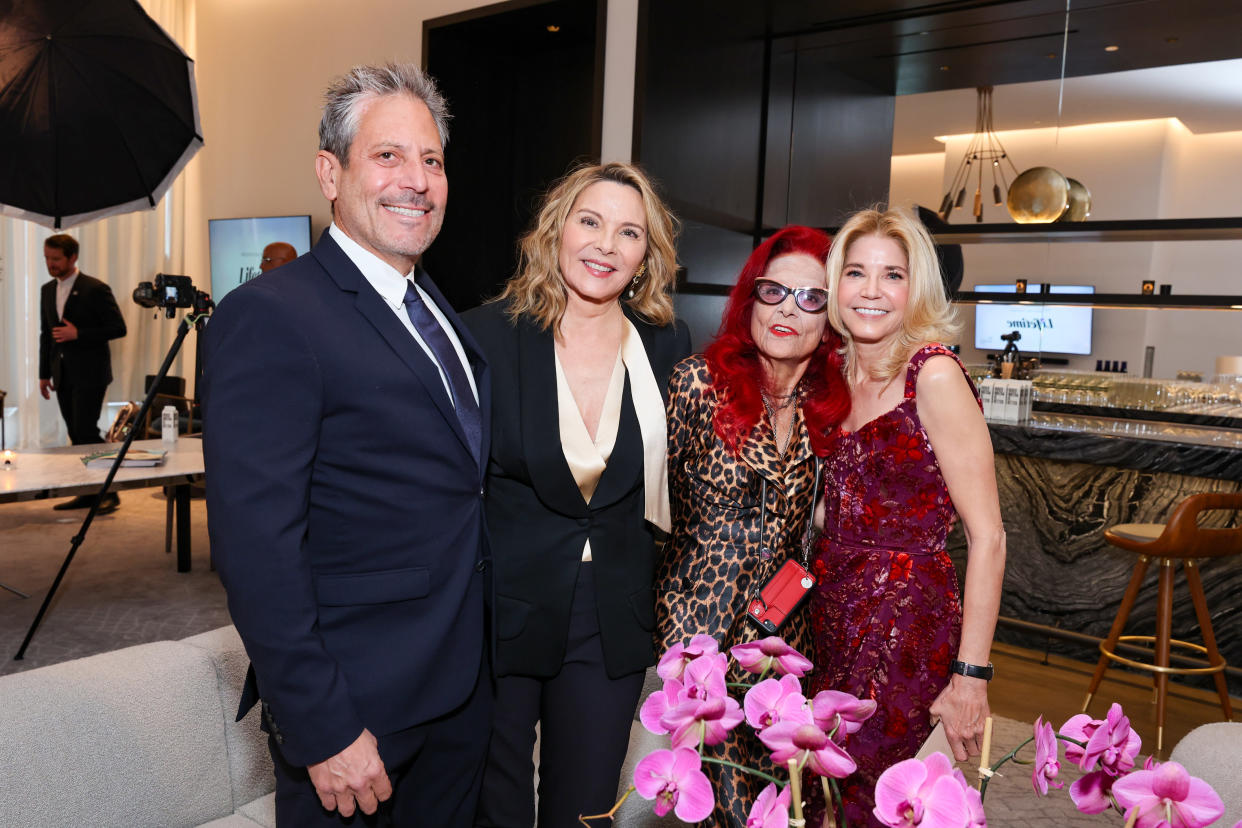 Cattrall, who's now starring in TV's How I Met Your Father and Queer as Folk, appears on the cover of this week's Variety and in it talks about walking away from SATC — and being confident in that decision, despite having to answer questions about it for years

She said Samantha "feels like an echo of the past. Other than the really wonderful feeling of — it's rare in my business — people wanting more, especially at 65. That feels powerful, that I've left something behind that I'm so proud of. I loved her. I loved her so, so, so much. It's tough competition. The original show is in all of our imaginations. But for me, it feels clean."