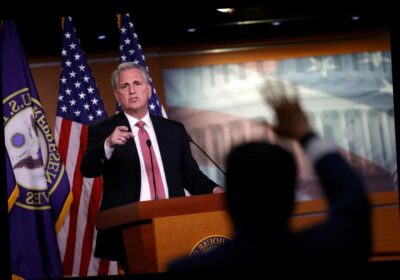 “I was disappointed to see within hours of assuming office the new administration was more interested in helping illegal immigrants than helping our own citizens, more interested in virtue signals to the climate activists than supporting the union workers who were building the Keystone pipeline, and more interested in appeasing the WHO than getting to the bottom of how China released this virus to the world in the first place,” McCarthy said.

Biden proposed a path to legalization for most illegal immigrants already in the US and signed 15 executive orders on his first day Wednesday, White House Press Secretary Jen Psaki said at her first press briefing.

McCarthy particularly assailed Biden’s decision to rejoin the WHO. Trump withdrew the US from the organization last year, saying it failed to protect global health by credulously believing Chinese data on COVID-19 before the virus spread and caused a pandemic.

“Just this week, a panel established by the WHO itself said the organization failed to act quickly at the start of the pandemic. Instead of demanding leadership change and reform… the Biden administration is rewarding failure — for the wrong priorities, at the wrong time,” McCarthy said.

Biden stressed national unity during his first day in office, and McCarthy offered his own take on how to achieve early-term bipartisanship. He criticized House Speaker Nancy Pelosi (D-Calif.) for saying Thursday that the House won’t be in session next week.

“Republicans are here ready to work, ready to make sure that we get businesses back open again, we get kids back in school and we get a vaccine to every person who wants one across America. To me, that is a unity agenda,” McCarthy said.

House Democrats have only 10 seats more than Republicans, meaning even a small number of defections could derail legislation. The Senate is divided 50-50, with Vice President Kamala Harris breaking ties for Democrats.