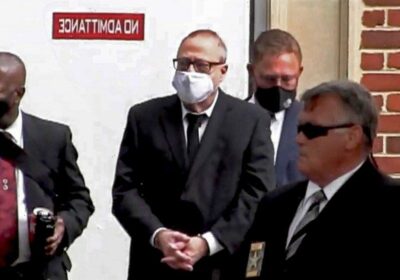 A Georgia judge on Thursday said he wants to review Ahmaud Arbery’s mental health records in private to determine if he will allow them to be used at the trial of three white defendants accused of tracking down the 25-year-old Black man and shooting him to death.

Chatham County Superior Court Judge Timothy R. Walmsley, who was appointed to preside over the the Glynn County, Georgia, case, ordered prosecutors and defense attorneys to submit the records to him and prepare him written briefs within 20 to 30 days on why they are or are not relevant in the high-profile murder case.

Lawyers for defendants Gregory McMichael, his son Travis McMichael and William “Roddie” Bryan, have asked for permission to use the records they contend are essential to show Arbery’s diagnoses of mental illness played a role in a pattern of “angry and aggressive” behavior and may have contributed to his fatal encounter on Feb. 23, 2020.

But prosecutors asked the judge to reject the request, saying the records are privileged information and that defense attorneys are attempting to use them to smear Arbery’s character.

Jason Sheffield, an attorney for the McMichaels, denied that the defense wants to use the records to undermine Arbery’s character.

“It is OK to celebrate and recognize who Ahmaud Arbery was in 2012, when he graduated high school, but it is reckless to disregard the mental health illness that plagued him for eight years leading up to this moment of Feb. 23, 2020,” Sheffield said.

The arguments were made during the second day of a pretrial hearing to decide what evidence will be allowed at the trial, which is scheduled for October.

On Wednesday, Sheffield said Arbery was diagnosed in 2018 with schizoaffective disorder, a combination of schizophrenia and mood disorders.

Dunikowski argued that the quality of the diagnosis was suspect because it was made in a two-hour evaluation by a registered nurse and nurse practitioner Arbery was sent to by his probation officer.

The judge also held off ruling on a prosecution motion to use recorded phone calls made by the defendant to friends and relatives from the Glynn County Detention Center, where they are being held without bail. Some of the calls were released during a bail hearing in December, including one in which Gregory McMichael laughed as he told his brother, “You’ve heard the saying that no good deed goes unpunished?”

Franklin Hogue, one of the attorneys for Gregory McMichael, objected to the release of the phone calls and accused prosecutors of misinterpreting Gregory McMicheal’s phone conversation to mean “good deed” meant killing of Arbery.

“It’s not what Mr. McMichael meant,” Hogue said. “He meant patrolling his neighborhood and trying to capture someone suspected of crimes in the neighborhood as the good deed, and being punished for it was him being charged with murder.”

Prosecutors have not said what phone conversations they would like to use at trial, but noted that a recorded message on each phone call warns inmates that what they say, unless it’s to their attorneys, is being recorded and can be used against them in court.

Hogue said there are 1,500 calls the three defendants have made from jail and accused prosecutors of wanting to cherry pick through them to find conversations to “incriminate a defendant for the case for which he is being detained.”

Walmsley said he will rule later this year whether to allow the phone calls to be introduced at trial and asked prosecutors to present him with a brief saying what conversations they intend to use.

In June 2020, a Glynn County grand jury voted to indict the McMichaels and Bryan on charges of felony murder, malice murder, aggravated assault, false imprisonment and criminal contempt to commit a felony in the death of Arbery. They each have pleaded not guilty.

Prosecutors contend that Arbery was out for a jog in the Satilla Shores neighborhood of Brunswick, Georgia, when he was spotted by Gregory McMichael, who suspected him of being a burglar.

Gregory McMichael, 65, a former Georgia police officer and an investigator for the Glynn County District Attorney’s Office, and his 35-year-old son, Travis, allegedly armed themselves, got into a pickup truck and began chasing Arbery, according to prosecutors. Bryan, 51, a neighbor of the McMichaels, allegedly joined the chase and recorded video on his cellphone of a cornered Arbery struggling with Travis McMichael, who ended up shooting Arbery three times, prosecutors said.

Travis and Gregory McMichael contend they were exercising the state’s Civil War-era citizen’s arrest statute when they attempted to detain Arbery. Travis McMichael has also claimed he shot Arbery in self-defense.

On Wednesday, defense attorneys called a host of witnesses to testify about different instances involving Arbery’s encounters with police, including a 2013 arrest for bringing a gun into a high school gym during a basketball game. Arbery was on probation at the time of the shooting after pleading guilty to attempting to shoplift a TV from a Walmart in 2017. Sheffield argued that the defense should be able to tell a jury about Arbery’s criminal background.

Walmsley said he will make a ruling in 20 to 30 days on whether Arbery’s criminal history will be admissible.

Dunikowski argued that Arbery criminal history should not be allowed into the trial because the defendants had no knowledge of his encounters with law enforcement when Arbery was chased down and shot.

In addition to the state charges, a federal grand jury indicted the McMichaels and Bryan last month on hate crime charges. They were arraigned in federal court on Tuesday and pleaded not guilty to charges of interference of rights and attempted kidnapping. The McMichaels also pleaded not guilty to charges of using, carrying and brandishing a firearm in relation to a crime of violence.