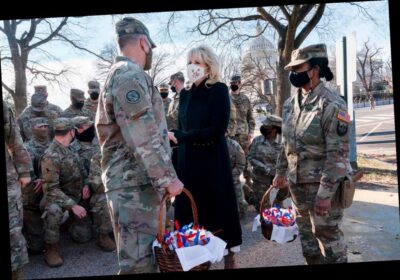 First Lady Jill Biden made a surprise visit to National Guard troops in Washington, DC Friday to thank them for protecting her family during her husband’s inauguration.

“I just wanted to come today to say thank you to all of you for keeping me and my family safe,” she told the officers during her first solo outing as first lady.

During the unscheduled stop, she emerged from her motorcade in a long black coat and  handed out chocolate chip cookies from a tin as a gesture of gratitude.

She added, “The White House baked you some chocolate chip cookies. I can’t say I baked them all myself.”

Her visit came after DC was rocked by the bombshell report Thursday that thousands of troops had been “banished” to a parking garage after being asked to leave parts of the US Capitol grounds.

On Friday, the first lady made the stop after planned visit to Whitman-Walker Health in downtown Washington.

More than 25,000 troops were called to DC ahead of Joe Biden’s inauguration in the wake of the deadly Jan. 6 US Capitol siege by pro-Trump supporters unhappy with the election, sparking fears of ongoing attacks.

Thousands of National Guard troops have since been asked to stay in Washington, DC until March to keep the nation’s capitol secure amid fears of rising homegrown extremism

Now, 7,000 of those National Guard members will stay in the city until March 12 according to a Military.com report published Friday, citing a National Guard official.

The FBI has so collared dozens of protesters in connection with the Capitol riot, including two New York men this week.

On Friday, White House press secretary Jen Psaki announced that President Biden was directing his Director of National Intelligence to conduct a comprehensive threat assessment on domestic violent extremism in the wake of the siege.

“The January 6 assault on the Capitol and the tragic deaths and destruction that occurred underscored what we have long known: the rise of domestic violent extremism is a serious and growing national security threat,” Psaki said.