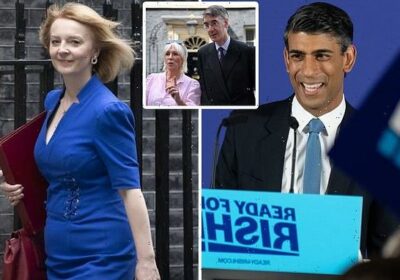 The Tory Right rallied behind Liz Truss last night with a series of brutal attacks on Rishi Sunak.

Jacob Rees-Mogg accused the former chancellor of raising tax to ‘socialist’ levels and ‘squandering’ their party’s record on the economy.

Former health secretary Sajid Javid, who knifed Mr Johnson last week, was humiliated yesterday after failing to secure enough backers and had to pull out. 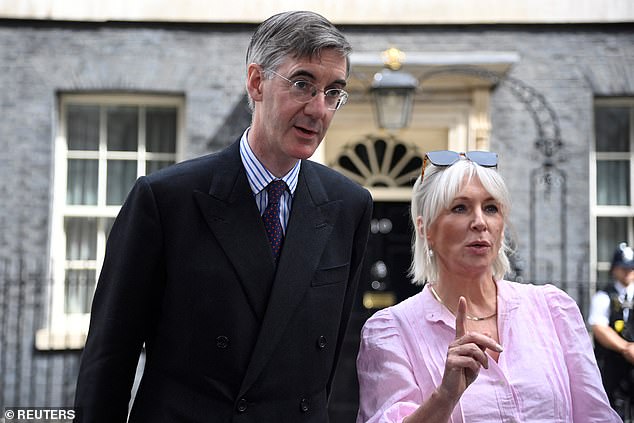 United: Jacob Rees-Mogg and Nadine Dorries at No 10 yesterday 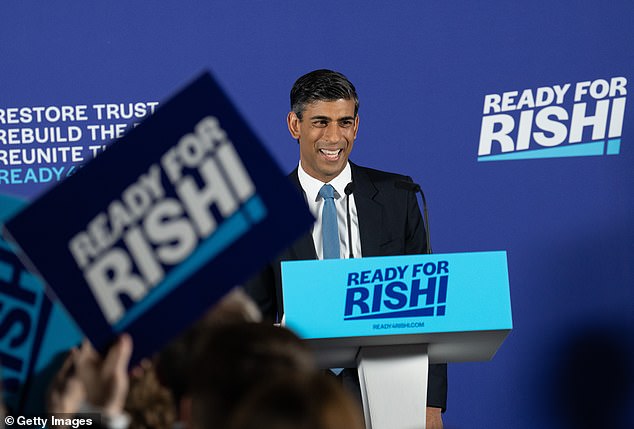 By Daniel Martin, Policy Editor for The Daily Mail

Rishi Sunak was last night accused of handing fake votes to rival candidates as part of a ‘dirty tricks’ campaign.

Nadine Dorries claimed the former chancellor’s team were persuading Tory MPs to vote for candidates with little chance of winning the Conservative leadership.

The Culture Secretary said it was a ‘stitch-up’ designed to help a candidate such as Jeremy Hunt get down to the final two, making it easier for Mr Sunak to win.

One source claimed that former minister Gavin Williamson, pictured, who is leading Mr Sunak’s parliamentary campaign, was organising the votes for other candidates.

Only 14 MPs have come out publicly to back former health secretary Mr Hunt.

But yesterday he reached the threshold of 20 MPs needed to go through to the first round of voting.

This sparked claims from rivals that Mr Hunt had only made the list because non-supporters had voted for him. Mrs Dorries, who announced yesterday morning that she was backing Foreign Secretary Liz Truss, said: ‘This is dirty tricks/a stitch up/dark arts. Take your pick.

‘Team Rishi want the candidate they know they can definitely beat in the final two and that is Jeremy Hunt.’ But last night a source on Mr Hunt’s campaign denied the claim.

‘This is categorically untrue and we hope all candidates and supporters will campaign on their own merits rather than attempting to smear opponents – just as Jeremy has done throughout his political career,’ they said.

One source in a rival camp claimed Mr Williamson was organising the siphoning off of some votes to let Mr Hunt get over the threshold. A source in Mr Sunak’s team said the accusation is not true.

÷Tom Tugendhat vowed to deploy defence chiefs to clear the NHS backlog as he launched his Conservative leadership campaign yesterday. In a speech littered with military metaphors, the former soldier said the British people wanted a government to ‘not only hold the line but to advance their aspirations’.

He pledged to tackle the burgeoning NHS backlog by introducing a ‘binding’ A&E and referrals target – and vowed to make NHS leaders accountable for it.

And Mr Tugendhat said that on his first day as Prime Minister he would bring together experts from the NHS, military, public and private sectors to bust through the backlog. ‘Too many of us are struggling to access the services we need, to see the doctors we want, struggling to feel safe and secure in our homes,’ he said at his campaign launch yesterday.

The senior Tory backbencher went on: ‘As a first and immediate step I would reintroduce a binding A&E and referrals target and hold NHS leaders accountable for it.’

In an article for today’s Daily Mail, Mr Rees-Mogg writes: ‘Sunak has squandered the Conservative Party’s decade-long effort to build a competitive tax regime and it will be the French and the Americans who will benefit, instead of the British people.

‘With Liz Truss as prime minister, we will have the best chance to undo these errors and right Britain’s course.’

With the final run-off increasingly being seen as a fight between Mr Sunak and Miss Truss:

They said she was the true Brexiteer candidate even though she backed Remain at the 2016 European referendum.

Education Secretary James Cleverly also came out in support of Miss Truss. Her supporters are trying to establish her as the ‘stop Sunak’ candidate after the former chancellor angered some on the Right with his high-tax, high-spend policy during the pandemic.

In his article for the Mail, Mr Rees-Mogg, who is Brexit opportunities minister, criticises Mr Sunak for bringing in tax rises –and points out that Miss Truss had opposed the moves.

He writes: ‘Liz has rejected the path that Rishi Sunak wanted to take us on. She opposed his breaking of our manifesto promise with the national insurance hike when the British people had barely recovered from the shock of the pandemic.

‘She opposed his raising the tax burden to the highest since the socialism of 1950s Labour. While the economy was at its most fragile, she opposed his 30 per cent rise in corporation tax, which will deter investment and economic growth when we need it most.’

Culture Secretary Mrs Dorries insisted that the Foreign Secretary was a ‘stronger Brexiteer’ than either she or Mr Rees-Mogg, despite her previous support for the Remain side.

Speaking to reporters in Downing Street after a Cabinet meeting, Mrs Dorries said: ‘I have sat with Liz in Cabinet now for some time. I’m very aware that she’s probably a stronger Brexiteer than the both of us. 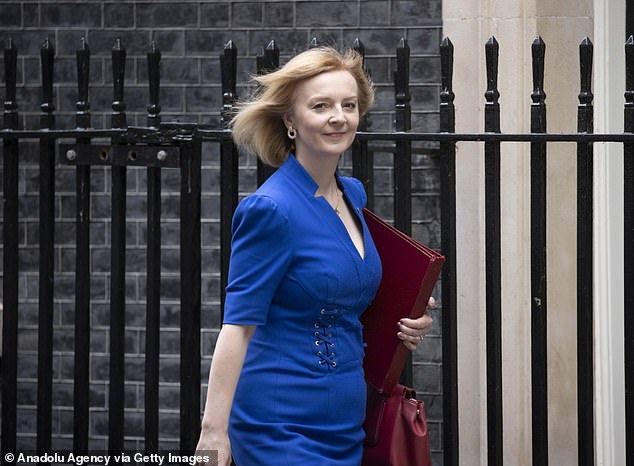 ‘She has consistently argued for low-tax policies and I’m particularly concerned about the 14million people who voted for a manifesto and voted for a government that the candidate that we select – for me it’s Liz who I’m going to back – will continue with those manifesto policies and will continue to deliver for the Government and the Conservative Party moving forward.’ Mrs Dorries also accused Gavin Williamson – the former chief whip who is running Mr Sunak’s parliamentary campaign – of ‘dirty tricks’ in ensuring that Mr Hunt made the final eight candidates.

She tweeted: ‘This is dirty tricks, a stitch-up or dark arts. Take your pick. Team Rishi want the candidate they know they can definitely beat in the final two and that is Jeremy Hunt.’ 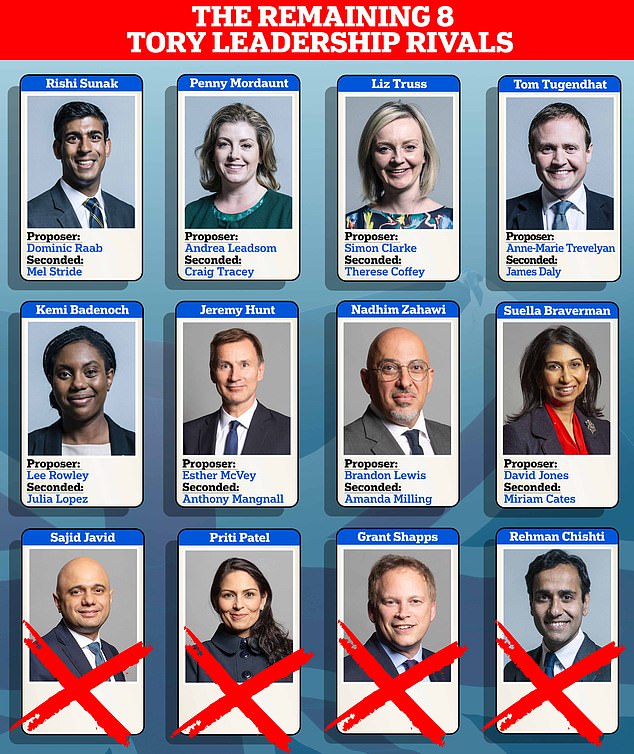 Her comments followed claims that the Sunak campaign was lending votes to Mr Hunt to ensure he was on the final ballot – something categorically denied by Mr Sunak’s team.

The former chancellor is the favourite with Conservative Party members, who will decide between the final two candidates, a poll revealed last night.

Some 28 per cent backed him, with Miss Truss second on 20 per cent and Miss Mordaunt third on 14 per cent, the Opinium survey for Channel 4 News found.

‘It’s a dirty story being spread by anti-Rishi people.’

The Conservative Party’s 358 MPs will vote this afternoon in the first ballot of the race.

The candidate who comes bottom will automatically be knocked out, as will any candidates who fail to attract at least 30 votes.

For the next Prime Minister we need a candidate who is committed to realising the benefits of Brexit, with a strong economic agenda designed to bring down inflation and restore growth, as well as the determination to cut Whitehall down to size.

In my role as Brexit Opportunities Minister nobody has given me more support than Liz Truss. Without her backing we would have imposed border controls in July that would have increased the cost of food. 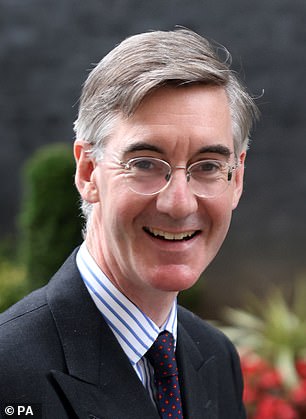 She also wants to see a sunset on retained EU law, unlike the Treasury, which has argued to keep tax policy in lockstep with the European Union in perpetuity.

Liz showed her mettle as international trade secretary. She spearheaded the trade agenda, setting in motion brand new trade deals with Australia and New Zealand, as well as expanding and improving on countless EU deals with countries like Mexico and Japan. We may have a trade deal with India this year, thanks to the foundations laid by her.

As Foreign Secretary, she has been one of the strongest and most convincing advocates for Brexit in Government. Apart from her support for me, she faced off against the erstwhile chancellor Rishi Sunak who tried to stop her and the Prime Minister securing the integrity of the United Kingdom by tackling the Northern Ireland Protocol.

With global supply chains under strain, there is no candidate I trust more than Liz to actually deliver the economic reforms which will cut prices, increase growth and resilience, and tackle inflation once and for all.

Her political philosophy is one with which all Conservatives should agree: putting the voter, the taxpayer and the consumer first; reforming the economy to help British businesses to compete with the whole world; and trusting businesses, entrepreneurs and the free market to grow the economy free of interference from overbearing regulators.

She knows how to get the most out of Whitehall and tackle the blob: In 2020 she banned the Civil Service from using pernicious unconscious bias training and improved the way in which the Government addresses inequality, by including economic and geographical factors, instead of the crude methods preferred by woke officials and the Labour Party.

Britain faces grave challenges today. Liz has rejected the path that Rishi Sunak wanted to take us down.

She opposed his breaking of our manifesto promise, with the national insurance hike when the British people had barely recovered from the shock of the pandemic. She opposed him raising the tax burden to the highest since the socialism of 1950s Labour. While the economy was at its most fragile, she opposed his plan to raise corporation tax by around 30 per cent next year, which will deter investment and economic growth when we need it most.

Sunak has squandered the Conservative Party’s decade-long efforts to build a competitive tax regime and it will be the French and the Americans who will benefit, instead of the British people. With Liz Truss as Prime Minister, we will have the best chance to undo these errors and right Britain’s course.

Liz has the most compelling and credible vision for how to restore our economy to growth, tackle inflation and pay for public services without taxing the public into submission.

Outside the European Union, we can harness the benefits of Brexit, remove redundant EU regulations from our books and make businesses more efficient and dynamic – and the British people more prosperous. This is the agenda which will restore the British economy to health and rebuild the public’s trust in the Conservatives.

It is undoubtedly true that the Conservative Party has suffered a difficult period after an extraordinary victory by Boris Johnson in 2019. Boris gave our party a mandate to deliver on the promises of Brexit and unleash the economic potential of the entire United Kingdom.

For the good of the country, Conservative Party members and all MPs, we must choose the candidate who will complete this task, and respect the choice of our voters who made their decision in December 2019. I believe that the best way of fulfilling this mandate is by voting for Liz Truss as leader of the Conservative Party.