Home » World News » Ivanka Trump’s time at the White House is about to end. Is her political career about to begin? Ivanka Trump has always been a business executive with a keen eye for marketing – whether that be real estate, moderately priced shoes or handbags. After she leaves the White House with her father, those who know the family say she could soon embark on a new venture: selling herself to American voters.

It's unclear where exactly Ivanka Trump and her husband – Jared Kushner, who like Ivanka is now a senior White House adviser – will physically land after they are expected to leave Washington in January. Some anticipate the couple will return to their old home of New York, while others speculate they may relocate to a "cottage" at the President's Bedminster golf course in New Jersey. 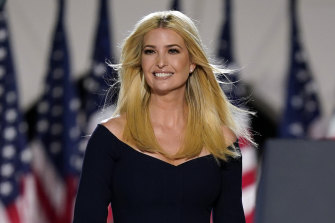 Associates of Ivanka Trump, pictured, say she will be contemplating how to maximise her political capital.Credit:AP

But former friends, colleagues and associates of the couple believe wherever they live, the first daughter will be contemplating how to maximise her political capital – whether that means an actual run for office, or a gauzier influence in Republican circles in a world where President Donald Trump still holds enormous political sway.

It's clear that some in and fallen from Trumpworld in New York – where "Not Wanted" fliers have cropped up around the city and "Lincoln Project" billboards in Times Square caused the couple to threaten a lawsuit – don't want to see that happen.

"I am happy to shed light on them to keep them as far away from our political realm as possible," said Marissa Velez Kraxberger, a film producer and the former creative director at Ivanka's now defunct company "Ivanka Trump," who called the President's eldest daughter "identical" to her father and voted for Joe Biden.

"I think she'd want to be the [first] female president," Kraxberger said, reflecting on her two years working with Trump. "I don't think she's actually ever had any interest in fashion but everything was an angle to gain more power in whatever possible way."

Ivanka Trump has dodged questions about whether she plans to run for a political office. But over her four years serving as a senior White House adviser, she has completed a stunning transformation from a publicly liberal New Yorker who some hoped would serve as a restraining influence on her father to an "unapologetically" "pro-life" advocate of the MAGA agenda – a "proud Trump Republican," as she told Fox News earlier this year.

Interviews with over a dozen sources painted a picture of a woman who, much like her father, is interested in leveraging the platform and global relationships she gleaned from her starring role in Washington. 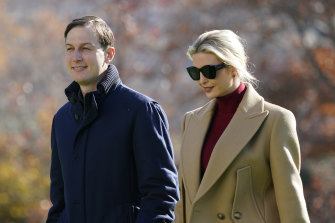 The White House did not respond to a request for an interview with Ivanka Trump. "While the media seems only interested in covering trite topics and perpetuating idle gossip, Ivanka continues to focus on her policy priorities fighting for American workers and their families," deputy White House press secretary Judd Deere said in a statement.

Nonetheless, Trumpworld could be seeking the next heir apparent once the President leaves office, though he is still baselessly insisting the election he lost to Biden was somehow rigged.

Trump has personally expressed an interest in running again in 2024, though that would likely be from his perch at his Mar-a-Lago Club in Florida. But the next generation of Trumps could also eye the throne, including both Ivanka and her brother, Donald Jr, who was popular on the road at MAGA rallies.

Others who know and have worked with the family warn that Ivanka Trump would not easily be able to shed the baggage of her father's presidency. That became clearer after The New York Times reported on Tuesday evening that the President is discussing with his advisers whether to grant pre-emptive pardons to his children, his son-in-law and his personal lawyer, Rudy Giuliani. Ivanka Trump isn't known to be a part of any federal investigations; such a presidential pardon would not apply to state probes.

But any whiff of legal trouble could stand as a roadblock to a political future.

"There's too much potential dirt that she doesn't want released," Michael Cohen, the president's former personal attorney who pleaded guilty in 2018 in two separate criminal cases related to his work for the Trump campaign and organisation, said of the speculation. "It's easy to say, 'I'm doing this, I'm doing that', but it's different to put your entire life out there for the media to excoriate you."

"Everyone is saying that she's running for office, and that's the ultimate compliment for her," said a source who runs in the couple's New York social circle. "Her recent stance as pro-life was making her ambitions very clear that she is laying the groundwork" for a political future in Republican politics, said the source.

This person added there "will definitely be a power struggle between [Ivanka] and her brother [Donald Trump Jr], who is obviously more connected to the base," and one of the GOP's top fundraisers.

Several of those interviewed described watching Ivanka Trump's speech at the 2020 Republican convention as a moment they recognised her full potential, as she called herself "the proud daughter of the people's president" before describing her father as an empathetic and bipartisan leader.

"I think from a personality profile she's just like her dad and has a high opinion of herself and they tend to be ambitious, regardless of what they do," a Trump campaign source added. 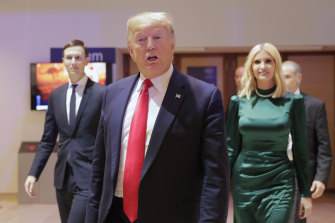 US President Donald Trump, Ivanka Trump and Jared Kushner, left, at the World Economic Forum in Davos, Switzerland in January.Credit:AP

Ivanka Trump's former friends and bridesmaid at her wedding, Lysandra Ohrstrom, wrote a scathing tell-all account in Vanity Fair describing Ivanka Trump as having "the Trump radar for status, money, and power".

There are still plenty of New Yorkers who remain loyal to Javanka, and willing to publicly associate with the pair. "A lot of collectors are Trumpists and Republicans and that art world will probably go on just hunky-dory," Saltz added.

See Bloomberg heiress Georgina Bloomberg, who told the Daily Beast that Ivanka Trump has "handled herself wonderfully over the last four years". And Andy Stein, a long-time Trump friend from New York, doesn't think the couple will lose sleep over their post-White House social status.

"I don't think that they particularly care anymore – they've had the world as their stage for the past four years," said Stein. "Whether or not they go to Anna Wintour's thing? I don't think it matters. They've been glamorous enough with every world leader."

Trump's former make-up artist Tina Turnbow, who did Ivanka Trump's make-up for high-profile events including the presidential inauguration, described her as a "kind and smart woman," "a creative visionary" and a "beautiful canvas to paint".

"Some of the people in my business are like, 'I can't believe you touched that face'," said Turnbow, who voted for Biden. "And that's just a shame. I still have a tender spot in my heart for her. I hope the best for her. And Jared was always so nice."

The source who runs in the couple's New York friend group remarked the family will "do just fine" anywhere north of 57th Street in Manhattan. But that source also warned some of the legal issues swirling around the first daughter could cause other kinds of headaches.

There are currently two New York state fraud investigations into President Trump and his businesses, which have expanded to investigate consulting fees that may have been paid to his daughter, as reported by The New York Times. Ivanka Trump is not the focus of the investigations.

"That's the type of thing swaying people … People have been wondering, 'Do you really think they can go to jail?' Suddenly there's a criminal taint," the source added. "It's so much more than the Met Gala and there's so much more at stake."

"This is harassment pure and simple," Ivanka responded on Twitter, parroting a tone usually reserved for her father's Twitter account. "This 'inquiry' by NYC democrats is 100% motivated by politics, publicity and rage. They know very well that there's nothing here and that there was no tax benefit whatsoever. These politicians are simply ruthless."

That's not the only investigation hanging over Ivanka Trump's head: Stephanie Winston Wolkoff, a former friend and confidant to first lady Melania Trump and a long-time Vogue executive who produced Trump's inauguration and worked in the East Wing, is a third party witness for DC Democratic Attorney General Karl Racine's investigation into the Trump inaugural committee.

Winston Wolkoff is slated to be deposed next week by the defendants – the Trump Organisation, Trump International Hotel and the 58th Presidential Inauguration Committee – according to a source involved in the case.

Racine charged the committee, in co-ordination with the Trump Organisation, with violating its non-profit status by alleging it overpaid for rooms in the Trump International Hotel for the presidential inauguration. ProPublica reported both the outgoing President and Ivanka Trump were aware of and warned by Winston Wolkoff about the arrangement. Ivanka Trump has not been accused of any wrongdoing.

The defendants issued Winston Wolkoff two new subpoenas in November: The Trump Organisation and Trump International Hotel hand delivered her a subpoena the Monday before election day, as first reported by Vanity Fair and confirmed by The Washington Post. On November 12, Winston Wolkoff was served another subpoena from the Trump Presidential Inauguration Committee requesting "All Documents Concerning any Communications" between her and "Donald J. Trump, Melania Trump, Ivanka Trump, Donald Trump Jr, or Eric Trump Concerning the planning or execution of the Inauguration".

The deadline to respond to both subpoenas was on Tuesday and all requested documents were submitted, according to the source involved in the case.

In Melania and Me: The Rise and Fall of My Friendship with the First Lady, Winston Wolkoff describes an immense effort to block Ivanka's attempts to assume the role of "acting" first lady while Melania Trump was still living in New York.

"Ivanka rushed in to fill the void as the 'acting' first lady, issuing constant social media posts and press releases galore about her involvement with women's issues, lobbying Daddy about climate change (alas, unsuccessfully), and attending every meeting she could slink her way into," writes Winston Wolkoff, who also released revealing audio recordings of her conversations with the first lady.

"From the presidential inaugural fund to violations of the emoluments clause, I suspect a new attorney general – one who is not handcuffed by the president – will obtain the truth," Cohen added.

US power and politics

Understand the election result and its aftermath with expert analysis from US correspondent Matthew Knott. Sign up here.