‘It’s changed my life again’: New drug offers hope for some with depression

“This year is probably the worst I’ve been,” said Ms Branwhite, who’s lived with depression for about a decade. “I pretty much hit like rock bottom, you get to a point where you run out of hope.” 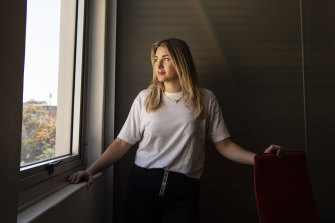 Elissa Branwhite has had depression for about a decade, but says the esketamine treatment has been lifechanging.Credit:Louise Kennerley

She is among the first people in Australia to receive a new drug for treatment-resistant depression. She’s been having twice-weekly treatments with an esketamine nasal spray through psychiatrist, Professor Ian Hickie.

“It has an immediate effect,” Professor Hickie said. “And it’s an interesting thing when you’ve been really depressed, to suddenly not feel so hopeless, or to feel like you want to go to dinner, or you wanted to see people and you haven’t felt like that in months or years.”

One in five Australians will experience depression in some form during their lifetime, Professor Hickie says, but only two-thirds of those people will respond well to anti-depressant medicines.

“It’s one of the biggest sources of disease burden in the community,” he said.

While esketamine can help many people with treatment-resistant depression, it won’t work for all of them, Professor Hickie says.

The drug, under the brand name Spravato, was approved by the medical regulator earlier this year for people like Ms Branwhite who had tried at least two other medical therapies, and to be administered under the supervision of expert medicos. It also will not work for every patient.

The esketamine nasal spray has been made available by pharmaceutical company Janssen under an early access program at more than 20 specialised clinics around the country, but it has not been listed on the Pharmaceutical Benefits Scheme.

Janssen was planning a second submission to the Pharmaceutical Benefits Advisory Council for the drug’s listing, but that would only cover the cost of the drug, and not the time of expert psychiatrists needed to administer and monitor patients.

The cost varies according to the dose and treatment schedule, and could be from $300 per week up to $1800 per week. 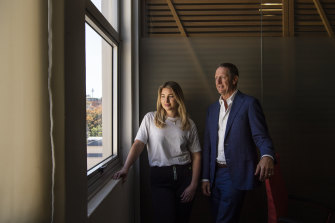 Professor Ian Hickie, who is one of the psychiatrists using the new treatment, says it won’t work for everyone.Credit:Louise Kennerley

UNSW Professor Colleen Loo of the Black Dog Institute and member of the Royal Australian and New Zealand College of Psychiatrists said the availability of Spravato was remarkable for people with treatment-resistant depression.

“There’s no doubt that this is a game-changing treatment,” she said, but added it was not for everyone, and required multiple treatments to have a more lasting effect.

“Unfortunately, the effect of a single treatment doesn’t tend to last so typically within a week, people have relapsed.”

Esketamine is a variant of the more widely available ketamine. That drug was initially developed as an anaesthetic, but research in the past 20 years had increasingly documented its antidepressant effects, Professor Loo said. Ketamine had also been used as a recreational drug, but used under clinical supervision she said there was good evidence of its efficacy.

“Very powerful effects have been shown for ketamine to treat depression, and that’s regardless of whether it’s a generically off-patent form of ketamine or whether it’s Spravato,” she said.

The new Spravato treatment is novel because it’s a nasal spray, rather than an injection or tablet. The treatment courses last weeks – two sessions a week to begin, before tapering off – and for some people they may need a couple of months’ treatment, while for others, treatment needs to be ongoing.

Professor Loo, one of the country’s leading researchers for the use of ketamine to treat depression, said it was also a complex treatment to use as it requires patients to be supervised for hours after their dose, which would require Medicare funding.

Professor Hickie said as with any treatment for depression, it was not clear who would respond to it before they had had the particular treatment.

“So we still have that trial and error aspect to it,” he said.

“So far, it’s just been amazing. It’s honestly helped change my life again, and given me that hope that there is something that can help people,” she said.