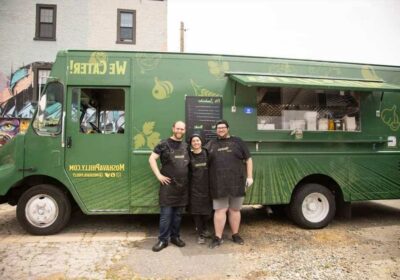 An Israeli vendor was yanked from a Philadelphia food trunk event, prompting claims that organizers bowed to anti-Semitism — and leading to a decision to scrap the event on Sunday.

Food truck Moshava said its invitation to the “Taste of Home” event scheduled for Father’s Day was pulled because organizers feared protests over their Israeli ties.

“We are deeply saddened by this,” Moshava said on its Instagram on Saturday.

“The organizers of the event heard rumors of a protest happening because of us being there and decided to uninvite us from fear that the protesters would get aggressive and threaten their event.”

The company shared a screenshot of a statement from one of the two organizers of the event, Eat up the Borders, announcing the decision to nix Moshava “in order to best serve our guests.” The screenshot says the nonprofit stands by an initiative “to give vendors from all nationalities a platform to showcase their talents and provide an awesome experience for all.”

Moshava said in its post it hoped in the future the organizers hold true to their words of a safe environment “for all religions and nationalities – not just all of them except Israeli and Jewish ones.”

Eat up the Borders has since made its social media pages private but co-organizer Sunflower Philly announced minutes before the scheduled start of the event on Sunday that the festivities had been scrapped.

“At Sunflower Philly we truly believe in creating a positive and inclusive community space here in Philadelphia,” the group said in an Instagram post.

“Due to the ongoing situation with one of our event partners @eatuptheborder and @moshava_philly we have to decided to cancel the ‘Taste of Home’ event today,” it went on.

“Sunflower Philly is a non-profit organization created to bring our community together through art, music & sustainability. We will continue to host events with people of all races, nationalities and sexual orientations who are aligned with our mission.”

The group didn’t respond to an email from The Post on Sunday.

But by the time of its announcement, a debate had already raged on social media and Rep. Brendan Boyle (D-Pa.) chimed in, saying he was “stunned and saddened” by the decision. It “represents surrendering to the threats of bigots,” he said in a statement.

“If the explanation of the organizers that Moshava’s invitation was revoked due to the threat of protests and violence is true, then I believe such threats should be investigated by law enforcement, as no person or organization should be coerced or threatened by the prospect of intimidation or violence,” Boyle said .

“We have spoken with the event organizers and expressed that we unequivocally disagree with their decision,” the ADC said. “We do understand that threats to the organizers were made, and we understand the fear and confusion that comes when your community faces that intimidation.”

“However, the decision to bow to this antisemitic intimidation by disinviting Moshava was wrong,” the statement went on.

“In the next few days, we will be meeting with the organizers to discuss what happened, provide education on antisemitism and share communal security resources.”

Moshava posted a photo of the operators of the truck on Sunday, and confirmed it was working with the organizers to “try and educate and grow together in a safe space” for everyone.

“Although we were disappointed with how the situation was greatly mishandled we do not believe the organizers intention came from an antisemitic place but the threats they were receiving to their event were,” Moshova said.