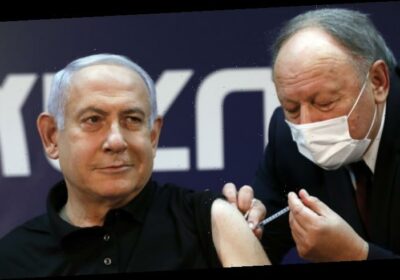 Prime Minister Benjamin Netanyahu has come under fire for donating COVID-19 vaccines to foreign allies, while Palestinians complained that, as an occupying power, Israel should be supplying more to them. 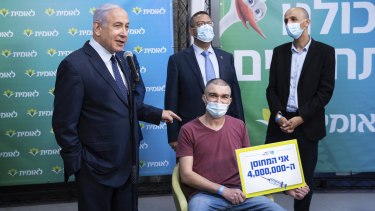 Prime Minister Benjamin Netanyahu, left, meets Theodor Salzen, seated, the 4 millionth person to be vaccinated for the coronavirus in Israel.Credit:AP

An official in Netanyahu’s office said that after legal questions were raised, Netanyahu’s national security adviser had asked Mandelblit to give his opinion.

“I welcome the decision to freeze the transfer of vaccines to other countries,” Gantz said on Twitter. Gantz is serving in Netanyahu’s government while preparing to face off against him in an election next month.

Netanyahu earlier this week defended what has been referred to as “vaccine diplomacy”, saying Israel had “unused” Moderna vaccines left over.

“I think it buys goodwill,” he said. “I think it is an intelligent decision … in return for many dividends that we have already received, in many ongoing contacts in many different fields that I will not elaborate about here.”

Israel has had one of the world’s fastest rollouts of COVID-19 vaccines, with nearly half the population already having received one dose.

Netanyahu reportedly agreed to pay Russia some $US1.2 million to buy coronavirus vaccines for arch-enemy Syria as part of a deal last week to release an Israeli prisoner, a woman, held in Damascus.

Centrist former general Gantz said a decision to give away vaccines must be made in the “proper forums” and it was not up to Netanyahu to take such action on his own. 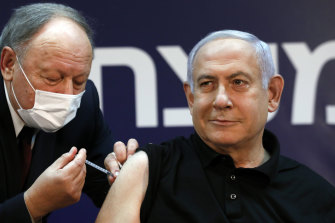 Israel has so far given only 2000 doses to the Palestinian Authority (PA), arguing that they are responsible for their own healthcare system. The West Bank and Gaza are home to 5.2 million Palestinians.

Palestinians have accused Israel of ignoring its duties as an occupying power by not including them in its inoculation program.

Israeli officials have said that under the Oslo peace accords, the PA Health Ministry is responsible for vaccinating people in Gaza and parts of the West Bank where it has limited self-rule.

With around 32,000 vaccine doses in hand to date, the Palestinians launched limited vaccination program in the West Bank and Gaza this month, beginning with health workers.

While the PA expects to receive an initial COVAX shipment within weeks, the program is at risk of failing, mainly due to a lack of funds.

The Palestinian territories have one of the lowest coronavirus testing rates in the Middle East and North Africa, the World Bank said in a report this week. The positivity rate in the West Bank is over 21 per cent, and in Gaza 29 per cent, indicating an uncontrolled spread of the pandemic, the World Bank said.

Two close allies of Israel have already confirmed they received shipments, before the program was suspended.

Honduras received 5000 vaccine doses on Thursday. A video clip of their arrival was tweeted by President Juan Orlando Hernandez with the message “Take heart, Honduras!”

The country has signalled its intention to open an embassy in Jerusalem, bolstering Israel’s claims to the city it regards as its capital but infuriating the Palestinians, who claim the eastern half of the city as the capital of their future state.

On Tuesday, Czech Foreign Minister Tomas Petricek said his country had received several thousand doses. The Czech Republic is one of Israel’s strongest supporters in the European Union.

Although the Czech Republic supports a two-state solution to the Israeli-Palestinian conflict, it was last month named in an International Criminal Court pre-trial decision as one of the countries supporting Israel’s argument that the court had no jurisdiction over war crimes in the Palestinian territories.

Israel, which has led the world with its fast rollout using the Pfizer-BioNTech vaccine, is one of a few countries engaging in vaccine diplomacy.

India approved the shipment of vaccines to Cambodia and plans to supply Mongolia and Pacific Island states, seeking to gain an advantage over China, which has also promised shots to regional neighbours.

Russia also donated doses of its Sputnik V vaccine worldwide, including to the Palestinians and to Latin America to cover shortfalls.

Before the Israeli program was suspended Energy Minister Yuval Steinitz defended it, saying that Netanyahu was “using the fact that we are the first [country] with a surplus” for political and diplomatic ends.

“It’s un-humanitarian not to give vaccines to someone in need,” Steinitz said. The doses donated to each country number in the few thousands, he said.

But US Senator Bernie Sanders added his voice to the critics, tweeting: “It is outrageous that Netanyahu would use spare vaccines to reward his foreign allies while so many Palestinians in the occupied territories are still waiting.”