ISIS fan who fantasised about carrying out terror attacks is jailed Knife-obsessed teenager and ISIS fan, 18, who shared bomb-making manuals with his family and fantasised about carrying out terror attacks with acid is jailed for more than three years

A knife-obsessed teenager who fantasised about carrying out a terror attack with a blade or with acid while riding a moped has been jailed for three years and four months.

Amman, of Harrow, Middlesex, was sentenced at the Old Bailey after he pleaded guilty to possessing and distributing terrorist documents. 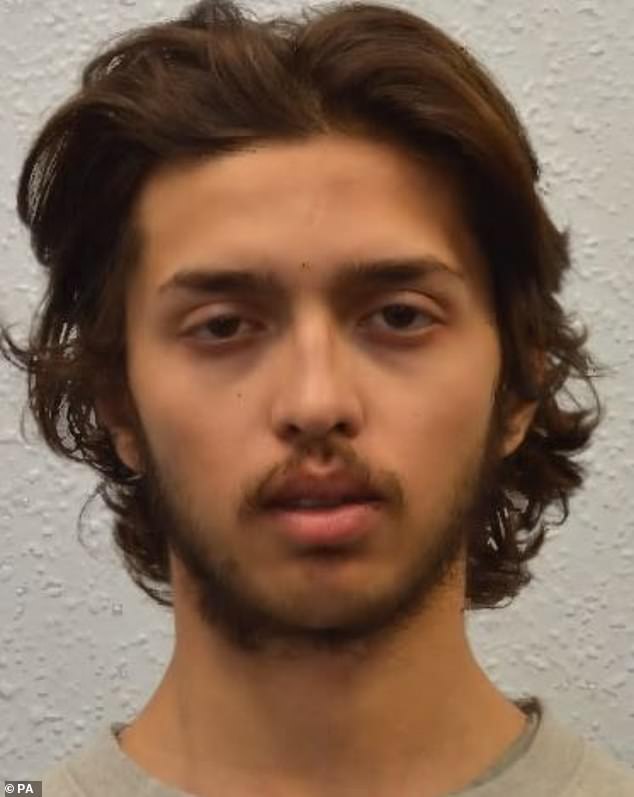 ISIS fan Sudesh Amman, 18, was sentenced at the Old Bailey after he pleaded guilty to possessing and distributing terrorist documents

His stash of manuals on bomb making, knife fighting and close combat included the titles Bloody Brazilian Knife Fighting and How to Make A Bomb In Your Kitchen.

The North West London College student jotted down how to make explosives and outlined his ‘goal’ to be a martyr in a notebook, the court heard.

Sudesh Mamoor Faraz Amman, 18, told his girlfriend she should kill her ‘kuffar’ parents and said he was planning a terrorist attack in Queensbury, northwest London, during Skype chats.

Amman posted a link to a pdf copy of the ‘Inspire’ magazine focusing on the idea of the ‘Lone Jihad’ in a family WhatsApp group in January this year.

The document contained an article about ‘the successful pressure cooker bomb’ and provided detailed instructions on how to maximise casualties through the use of IEDs.

The court heard he planned to conduct an attack was focused on using a knife but reference was also made to committing acid attacks on moped.

Prosecutor Kelly Brocklehurst said police were alerted by a Dutch blogger who identified extremist material in a Telegram chat in April.

There was a photo of a knife and two firearms on a Shahada flag bearing Arabic words which mean ‘armed and ready’. 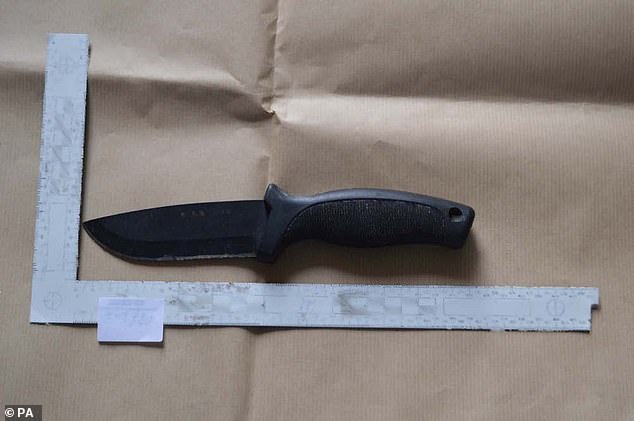 A combat knife found in the home of Sudesh Amman 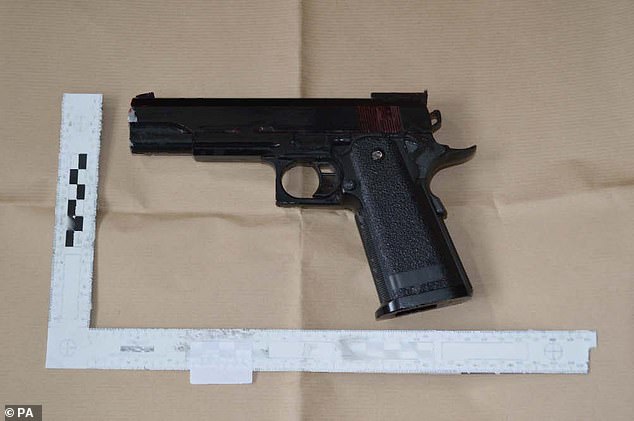 A BB Gun found in the home of Sudesh Amman

The blogger thought the same person also posted a YouTube link to a pro-gay rights speaker at Speakers Corner in Hyde Park, the court heard.

Police linked the online post to Amman and arrested him in May.

In a search of his family home, officers seized an air gun, a black flag and a combat knife.

Mr Brocklehurst said: ‘The defendant had discussed with his family, friends and girlfriend his strong and often extreme views on jihad, the kuffar, and his desire to carry out a terrorist attack.

‘Much of his fascination with conducting an attack was focused on using a knife but reference was also made to committing acid attacks on mopeds.

‘The Crown contends that the defendant’s interest in Islamic extremism and Daesh in particular is more than a mere immature fascination with the taboo and with graphic violence. He is clearly someone with sincerely held and concerning ideological beliefs which motivate him to collect and disseminate such material.

‘For example, he is seen telling his girlfriend in online chat how he has declared a pledge to Islamic State and wishes to purge society and carry out acid attacks. Elsewhere he is seen telling her he prefers the idea of a knife attack over use of bombs.’

The science and maths student had previous convictions for possession of an offensive weapon and cannabis.

He was aged just 17 when he began collecting terrorist material in 2017.

Sentencing, Judge Mark Lucraft QC said: ‘Your interest in Islamic extremism and Daesh appears to be more than just an immature fascination with the taboo and graphic violence.

‘It seems to me on the material here that you are someone with sincerely held and concerning ideological beliefs which motivate you to collect and disseminate material of the type shown.

‘In online chats you tell your girlfriend that you have declared a pledge to Islamic State and that you wish to purge society and carry out acid attacks.

‘You speak about preparing a knife attack and the use of bombs and ask her if you can have a knife delivered to her address.

‘You speak about ISIS being the best thing about Islam as well as whether you should be an ‘internet mujahidin’ or a ‘real one’.’

The defendant smiled and waved at the public gallery as he was jailed.