Has Iran LIED about its Covid-19 death toll? Government’s ‘own records’ show 42,000 people have died — TRIPLE the 14,000 officially recorded

Iran may have lied about its coronavirus death toll, with almost triple the number of people dying during the pandemic than reported.

The stark numbers come from an anonymous source who leaked official documents to the BBC to ‘shed light’ on the truth.

It shows that the first Covid-19 death was on January 22, almost a month before the first case was officially reported on February 19.

Alongside China, Iran has previously been accused of fiddling its numbers to cover up the true scale of its coronavirus crisis.

Although the number of cases had reportedly dipped since March, Iran has seen a surge in cases over the last few weeks. Yesterday health chiefs in the nation in the Middle East recorded 2,600 cases — the highest daily toll for almost a month. 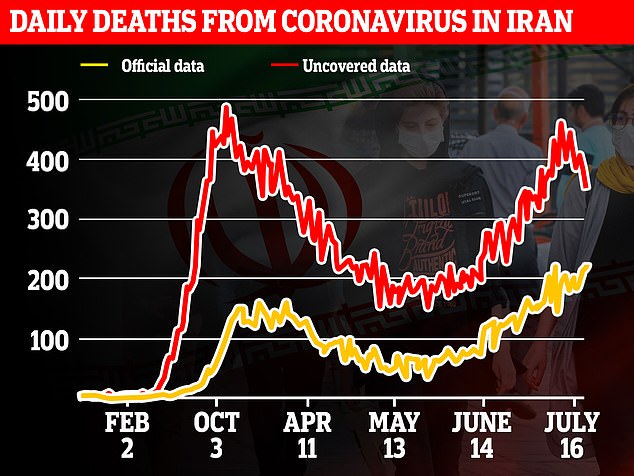 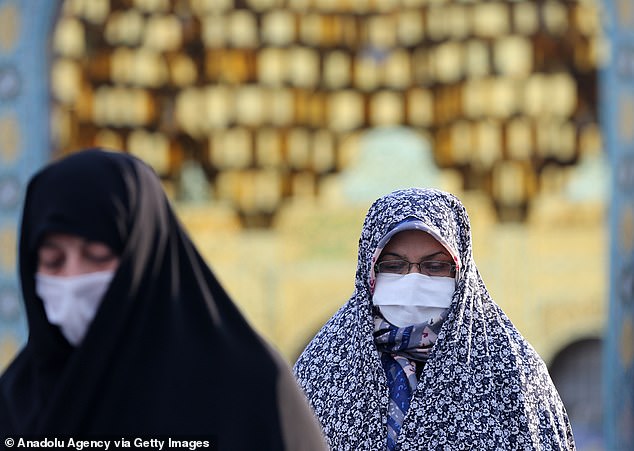 The stark numbers come from an anonymous source who leaked official documents to the BBC to ‘shed light’ on the truth. Pictured: Muslims perform Eid al-Adha prayer in the capital Tehran on July 31

Iran has still been the worst-hit country in the Middle East during the coronavirus pandemic, based on its health ministry’s data.

But Iran would shoot up to one of the worst five countries hit by the coronavirus, if the leaked data is proven to be true.

Iranian doctors had reportedly been warning of Covid-19 as early as December 2019, when the coronavirus was first discovered in China.

Iran is the country hardest hit by the coronavirus pandemic in the Middle East, and Covid-19 infections and deaths have risen sharply since restrictions on movement began to be eased in mid-April.

Health ministry spokeswoman Sima Sadat Lari said on Sunday that 2,685 more people had tested positive for Covid-19 in the past 24 hours, the country’s highest single-day count since July 8.

According to Lari, the situation is ‘concerning’ in 25 out of Iran’s 31 provinces.

‘Sadly, since late June, daily infections have been on a rising trajectory’ in Qom in central Iran, she said.

‘We are concerned that trivialising the situation and lax observance of health protocols may lead to a worsening of the outbreak in the province.’

Lari warned against travel to Mazandaran, a popular northern tourist resort at the vanguard of the outbreak where daily infections had more than quadrupled in the past six weeks.

Official figures show a marked increase in deaths and infections since the end of June.

Iran registered a record 235 deaths from the new coronavirus in the 24 hours up until Tuesday, July 28.

It wasn’t until February 19 when two cases were reported in Qom, a holy city in the north. Both were believed to been related to travel to China.

According to the BBC, government documents shows the first Covid-19 death in the country was recorded on January 22.

By the time officials had acknowledged the first two cases of the coronavirus, leaked data shows 52 people had already died.

Tehran, the capital, has the highest number of deaths. Some 8,120 people have died after testing positive for the disease or having similar symptoms.

For comparison, data from the health ministry says there have only been 5,000 cases diagnosed in the capital — which is home to 8.7million people.

The leaked data shows that cases and deaths rose at the same rate reported by the health ministry at the time.

But the initial rise of deaths is far steeper than health ministry figures and by mid-March it was five times what was reported.

The health ministry has said that the country’s reports to the World Health Organization are ‘transparent’ and ‘far from any deviations’.

The source that sent the data to the BBC said they shared it in order to ‘shed light on truth’ and to end ‘political games’ over the epidemic.

It includes details of daily admissions to hospitals across Iran, including names, age, gender, symptoms, date and length of periods spent in hospital, and underlying conditions patients might have.

The huge gap in the figures suggests the Iranian government attempted to deliberately cover up the true size of the crisis, as opposed to there being a slight level of inaccurate counting seen in many countries.

For example in the UK, there are doubts over the government’s death tally of 46,201 because of the way deaths are counted, which is currently under investigation. But the total is thought to be inflated only by around 1,000.

There have also been regular claims that China has not been transparent about exactly how bad the Covid-19 outbreak was there, which experts say influenced other countries. 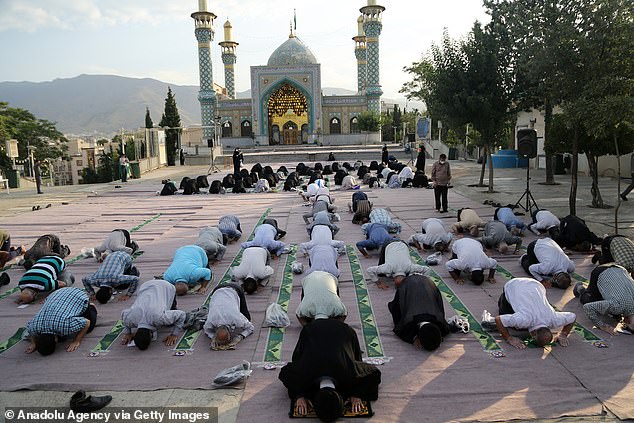 The health ministry has said that the country’s reports to the World Health Organization are ‘transparent’ and ‘far from any deviations’. Pictured, Muslims perform Eid al-Adha prayer Imamzadeh Panj Tan Tomb despite the announcement of the government banning the mass prayers due to coronavirus in Tehran on July 31 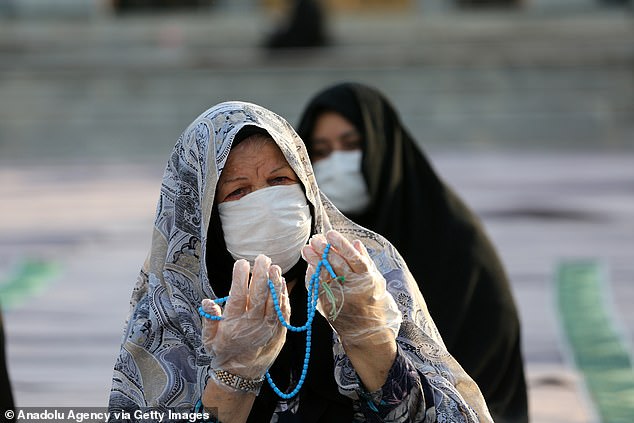 The source that sent the data to the BBC said they shared it in order to ‘shed light on truth’ and to end ‘political games’ over the epidemic. Pictured: A Muslim praying in Tehran, July 31

US researchers suggested China covered up the true size of its epidemic and used the activity of crematoriums in Wuhan to try and calculate accurate numbers.

They found the city — which is where the pandemic began in December — may have been burning between 800 and 2,000 bodies every day by the second week of February, when the official death toll for the whole of China was only around 700.

Reports of 86 Wuhan crematoriums operating 24 hours a day at full capacity raises suspicion that the number of people dying was more than just hundreds, they said.

Funeral homes were also buying thousands of urns for ashes and the study suggests that, by March 23 — when the UK went into lockdown — around 36,000 people had died in Wuhan alone. The official number for all China at the time was 2,524.

The study of crematorium operations in Wuhan was done by experts at the University of Washington, Ohio State University and US communications company AT&T.

It was led by Dr Mai He, a pathologist at Washington, and was based mostly on media reports rather than scientific data.

The study – published on medRxiv – was not reviewed by other scientists or published in a peer-reviewed journal, meaning experts haven’t pointed out flaws in the methodology for Dr He and colleagues to amend.

China has reported relatively low numbers of cases and deaths — 84,428 and 4,634 — despite the virus emerging there weeks before it did in any other country and months before the crisis really hit Europe and America.

The Chinese city of Wuhan was where the virus first took hold back in December, but since then various aspects of Beijing’s information has been questioned and even discredited.

One study suggested the true death toll was 14 times higher based on activity at crematoriums.

Since the outbreak of the virus in Iran, many observers have expressed concern about the official numbers including political groups and doctors working on the front line.

In the early days of the pandemic, anonymous physicians who spoke with the New York Times said they believed the first case of Covid in Iran was in December, in the city of Gorgan.

They said in the coming weeks as the cases mounted and many of the patients started dying, hospital officials told staff ‘to keep quiet’.

And by the time the first cases were reported, there were ‘hundreds’ of ill patients in the hospital in Gorgan, and so many deaths ‘that a local cemetery hired a backhoe to dig graves’.

Doctors have told the BBC that the Iranian health ministry has been under pressure from security and intelligence bodies inside Iran to suppress numbers.

Dr Pouladi, a pseudonym, said the ministry ‘was in denial’ and that the position of the security services ‘was not to admit to the existence of coronavirus in Iran’.

He added: ‘Initially they did not have testing kits and when they got them, they weren’t used widely enough.’

It is believed officials downplayed the size of the outbreak in fear it would reduce the turnout to election vote on February 21.

Dr Nouroldin Pirmoazzen, a former member of Iran’s parliament who also was an official at the health ministry, said the Iranian government was ‘anxious and fearful of the truth’ when coronavirus hit Iran.

He said: ‘The government was afraid that the poor and the unemployed would take to the streets.’

The country had already been battling difficult times before Covid-19 arrived, including that Iranian armed forces mistakenly fired missiles at a Ukrainian airliner only minutes after it had taken off from Tehran’s international airport.

All 176 people on board were killed, which didn’t come to light for three days because authorities tried to cover it up.

Data which has now been thrown into question suggests that Covid-19 cases reached their lowest by mid-May, but 800 people were still being diagnosed every day.

Iran started to relax its restrictions in mid-April after the number of infections declined.

A new peak of cases was reported on 4 June (3,574) and the country has struggled to drive infections down since then.

Health ministry spokesman Sima Sadat Lari confirmed on Sunday that since late June daily infections have been on a ‘rising trajectory’.

Iran’s chief epidemiologist at the country’s health ministry, Mohammad-Mehdi Gouya, claimed the main reason for the rising numbers is because increased testing was identifying more people who have only mild symptoms.