Dirty Hairy: Indian man hasn’t washed his six-foot dreadlocks in 40 years – and call them a ‘blessing from God’

A man in India who hasn’t cut or washed his hair in 40 years now sports six-foot-long dreadlocks – and calls them a ‘blessing from God.’

Sakal Dev Tuddu, 63, from the Munger district of eastern Bihar state, wears his mat of hair on top of his head like a turban.

He says that one night, some 40 years ago, his hair spontaneously wove itself into a ‘jatta’ or dreadlock, which he took as a divine blessing. 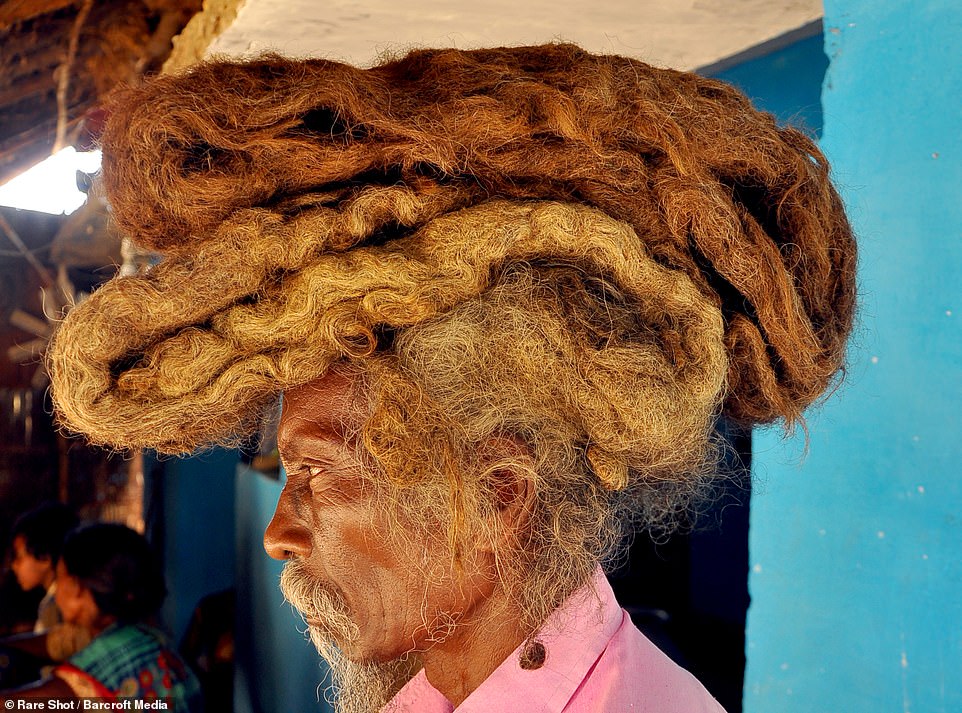 Sakal Dev Tuddu, 63, from India’s Bihar state, wears his six-foot-long mat of hair on top of his head like a turban wrapped in a white cloth 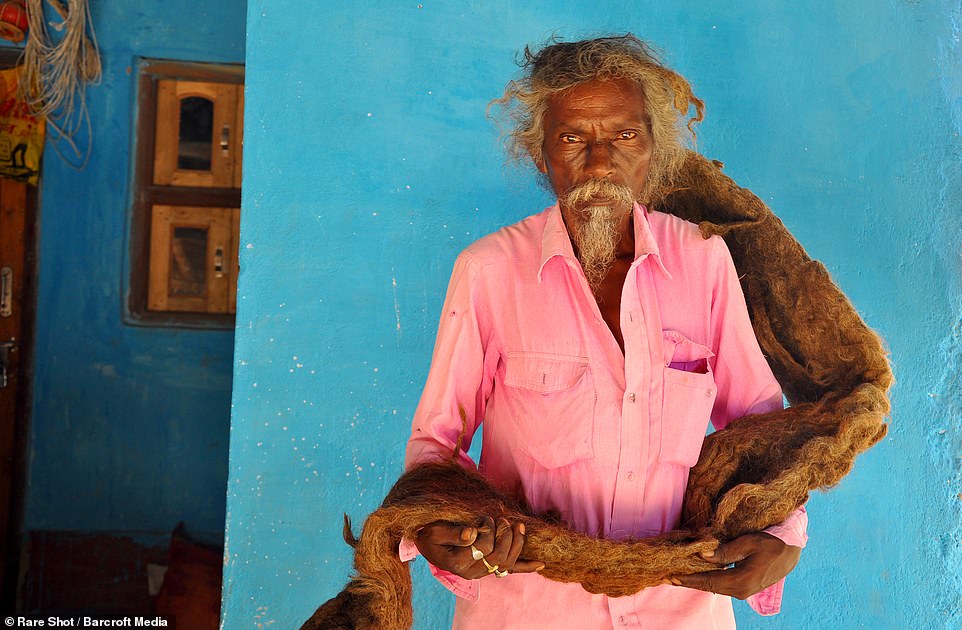 Sakal Dev says his hair spntaneously knotted itself into a dreadlock one night as he slept, and that God visited him in a dream and told him never to cut or wash it

He also says God visited him in a dream and told him not to cut his hair – an instruction he has obeyed ever since.

He also gave up drinking and smoking out of devotion to his deity. Sadhus, Hindu holy men, also go without grooming their hair and sport long jattas.

But unlike the sadhus, Sakal Dev’s hair is matted into one huge knotted lock, which he ties up in a white cloth when he goes out to keep it clean.

If he didn’t stack his hair up on top of his head it would trail on the ground behind him.

In fact, his neighbours have dubbed him ‘Mahatma Ji’ as a mark of respect for his holy appearance and humble demeanour.

He is renowned as a traditional healer, and prepares home-made treatments for childless couples. 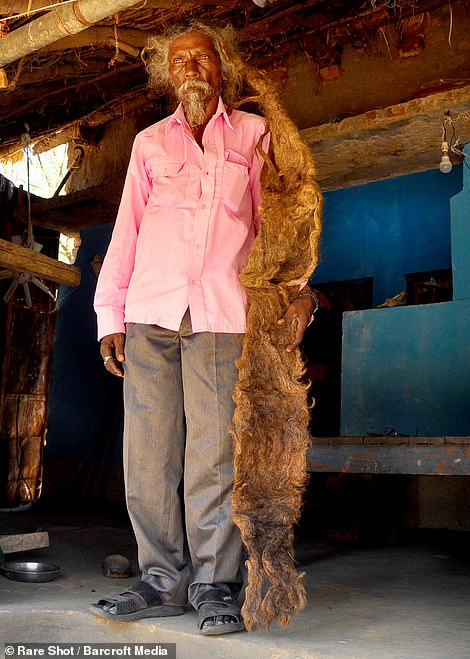 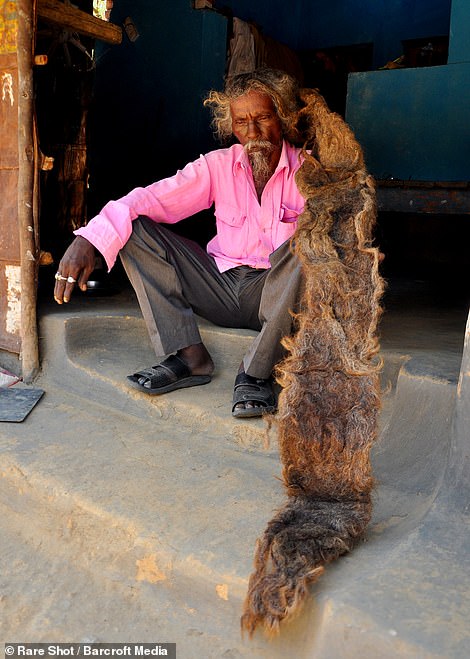 Sakal Dev Tuddu, from India’s Bihar state, has a single six-foot-long dreadlock after not cutting or washing his hair for 40 years 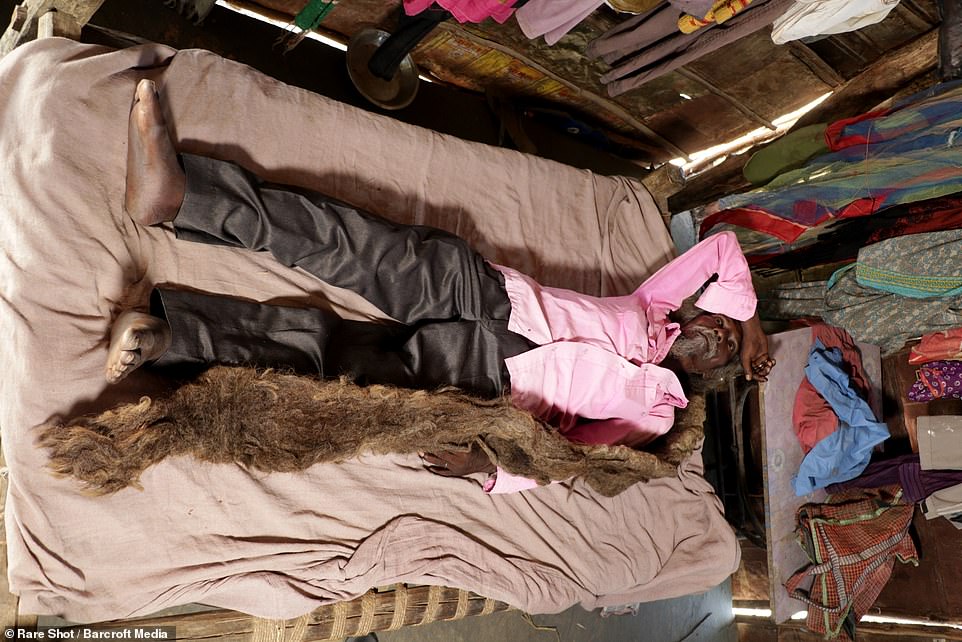 Bihar state resident Sakal Dev Tuddu lies in bed to show off the length of his single huge dreadlock, which stretches down below his feet 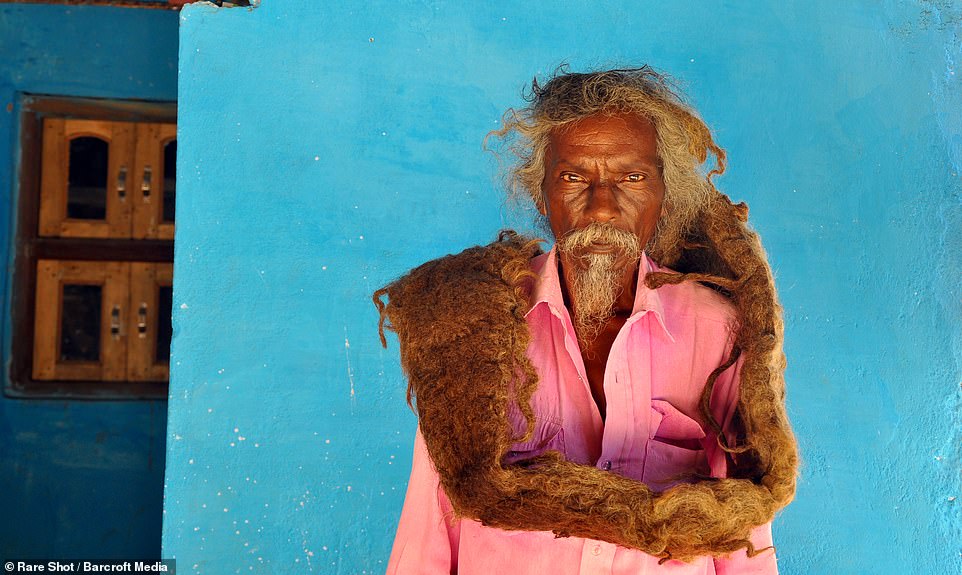 Sakal Dev has worked for the forest department for 31 years and lives with his wife Rupiya Devi, three sons, three daughters and seven grandchildren

People come from far and wide to meet Sakal Dev and take his photograph, but he greets them all with good humour.

Sakal Dev has worked for the forest department for 31 years and lives with his wife Rupiya Devi, three sons, three daughters and seven grandchildren.

He says his wife has no problem with his unruly mane.

The record for the world’s longest dreadlocks is held by Kenyan-resident Florida woman Asha Mandela, whose hair measured an incredible 110 feet (34m) in 2018 when she was 55.

Ninth-century Viking king Harald I swore an oath not to cut or comb his hair until he had conquered all of Norway, earning himself the epithet ‘Shaggy Harald.’

Harald, the son of Halfdan the Black and father of Erik Bloodaxe, eventually won the whole kingdom and became known as ‘Harald Finehair.’