‘I thought the world was ending’: Incredible video shows ‘sun halo’ blaze in the sky in Malaysia

This video shows the moment a young man captures a rare phenomenon called a sun halo.

A Twitter user going by the name of @Bnguyen24 panned his camera towards the sky above a palm tree-lined street in Malaysia to show the blazing sun with a huge ring around it.

One user reacting to the video, said: ‘I saw this in Cuba and thought the world was ending.’ 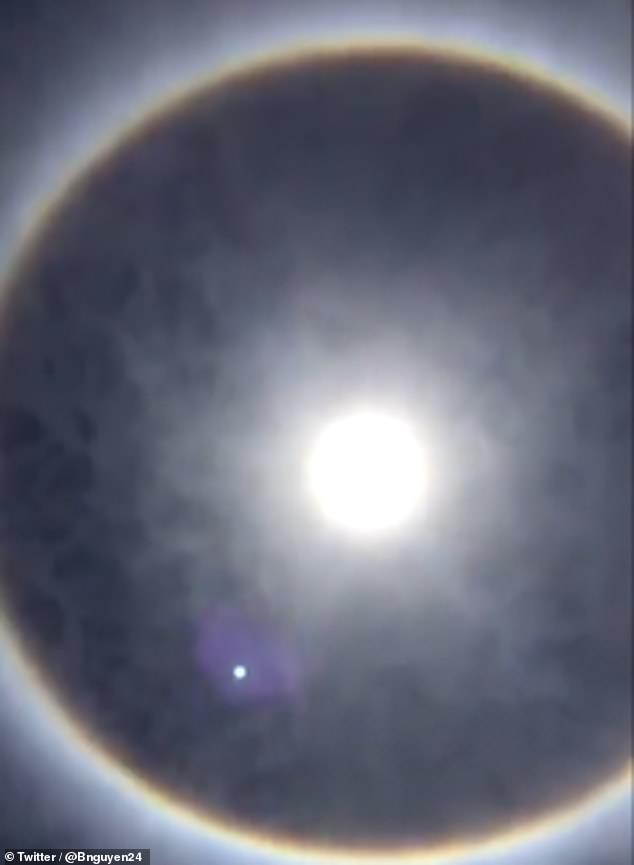 The deep freeze gripping the Midwest of America also created the spectacle – also known as ‘sun dogs’ – thousands of miles away from Malaysia.

As temperatures plunged as low as -42F in Park Rapids, Minnesota and -31F in Fargo, North Dakota, sun dogs were spotted throughout the upper Midwest on Tuesday and Wednesday.

The National Weather Service in the US describes the phenomenon as colored spots of light that appear on either side of the sun due to the refraction of light through ice crystals. 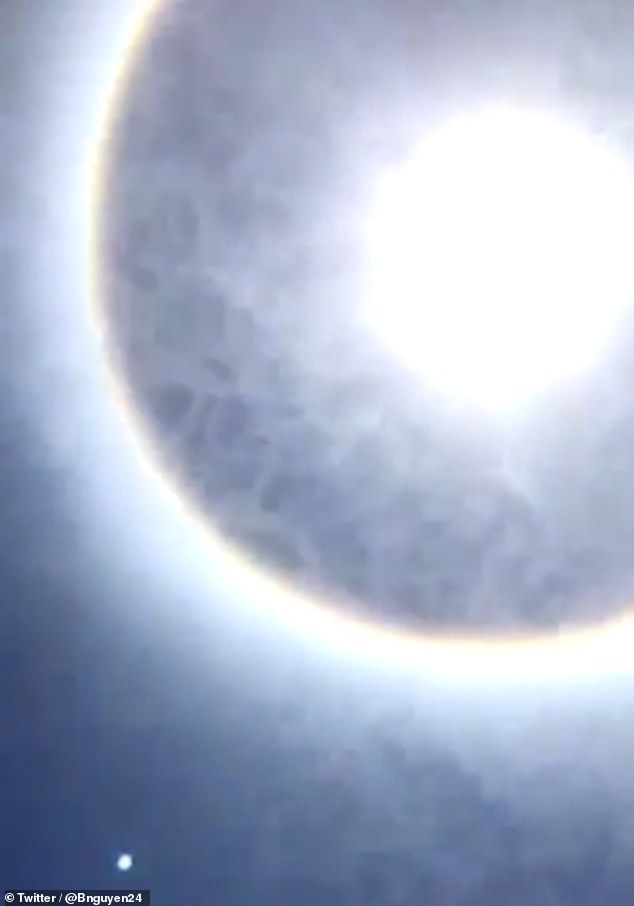 They are located approximately 22 degrees either left, right, or both, from the sun, depending on where the ice crystals are present.

The colors usually go from red closest to the sun, out to blue on the outside of the sundog.

Sundogs are also known as mock suns or parhelia, which means ‘with the sun’.

On Twitter, photos of the phenomenon also poured in from North Dakota and Iowa.

The painfully cold weather system that put much of the Midwest into a historic deep freeze was expected to ease today, though temperatures could still tumble to record lows in some places before the region begins to thaw out.

WHAT IS A SUNDOG? 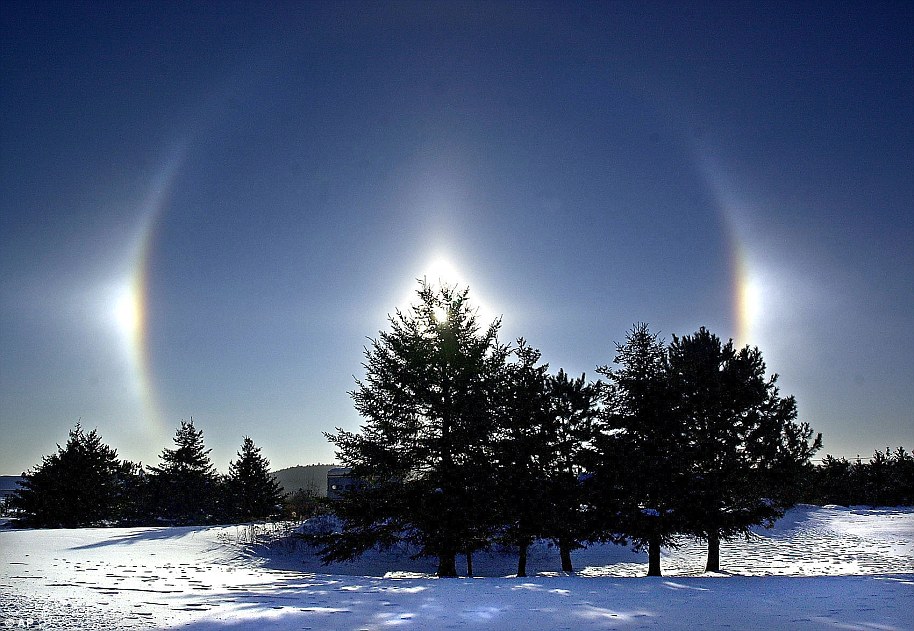 Sundogs or parhelia are seen over a snow-covered field in Duluth. Sundogs, also known as mock suns because of the bright spots at either side of the sun, appear when light from the sun near the horizon is refracted by ice crystals in the atmosphere

The sight of three suns in the sky is enough to make most of us rub our eyes in disbelief, but centuries ago, the strange sight was seen as a bad omen.

The unusual spectacle is called a parhelion or a sundog. 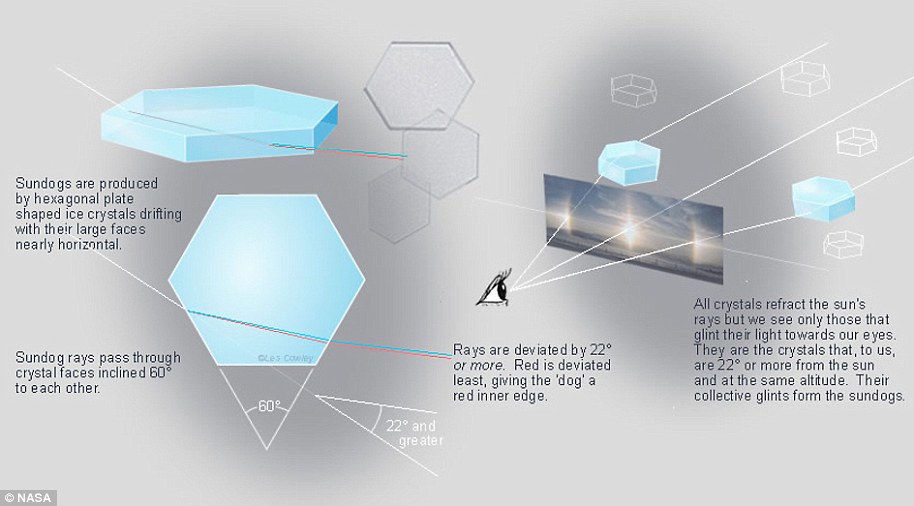 Sundogs are created when sunlight is refracted by large, hexagonal ice crystals, such as those in snowflakes.

It is the result of a natural phenomenon in which sunlight passes though snow crystals in a particular way when they are suspended in the air.

Sundogs are created when sunlight is refracted by large, hexagonal ice crystals, such as those in snowflakes.

They typically appear as two coloured patches of light either side of the sun and though rare, can in theory be seen anywhere in the world in any season.

They are created by the refraction of light passing through flat, hexagonal ice crystals in high, cold clouds.

The crystals act like prisms so that as light passes through them, it is bent by exactly 22 degrees before reaching viewers’ eyes to make the illusion.

If the crystals are more randomly located in clouds, a complete ring around the sun is visible, called a halo. 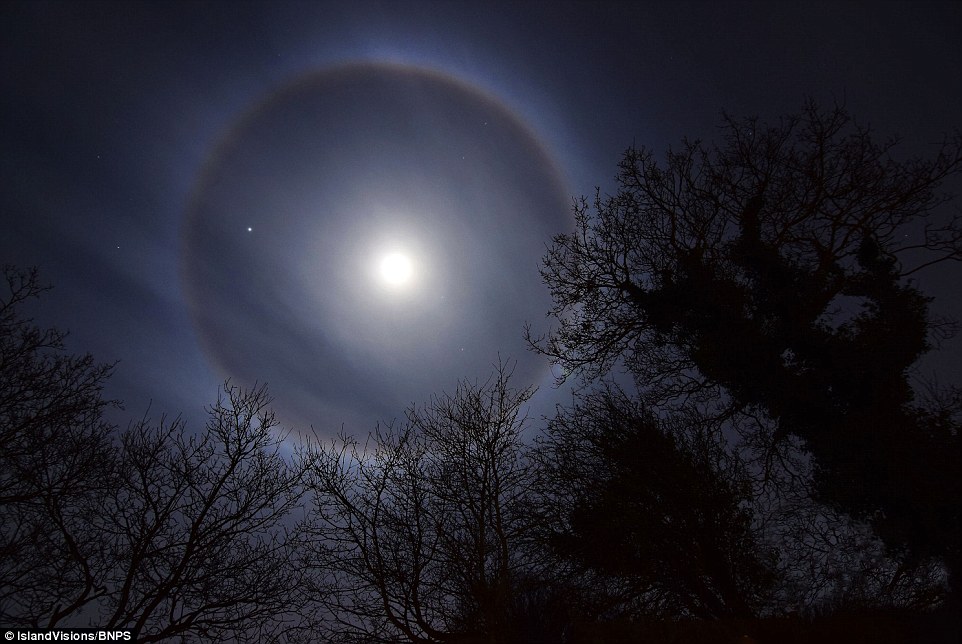 Pictured is the moon halo over the, Isle of Wight. The moon halo is formed by a high-altitude ice crystal cloud that gathers around the moon

But if the crystals sink through the air, they become arranged in vertical lines, so that the sunlight is refracted horizontally, to make sundogs, as seen in these images.

If the phenomenon is seen as the sun is rising, the sundogs gradually move further away from the sun, but always stay at the same elevation, so the three ‘orbs’ appear to be the same distance from the horizon.

They are reddest in colour when they are near to the sun and fade to yellow, orange and then blue as they move away. The colours of sundogs merge into a white halo in some instances.