In shattered Chernihiv, Russian siege leaves a city asking why 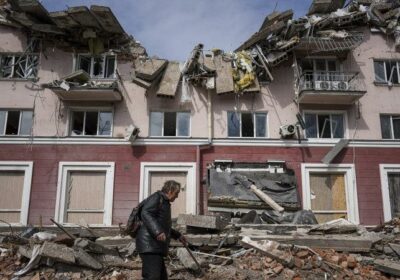 Officials here, about 150 kilometres north of Kyiv, buried hundreds of civilians in makeshift coffins and hastily dug trenches. Families held mass funerals, fearing they could be killed if they lingered in the cemetery. Water and electricity were almost entirely cut off, and no aid could come in.

More than half of the city’s prewar population of 300,000 fled. Those who stayed behind spent much of the past five weeks huddled underground as Russian forces pounded residential neighbourhoods with missiles and mortar fire. The civilian death toll remains unclear, but Mayor Vladyslav Atroshenko said at times the city buried up to 100 people in a single day. 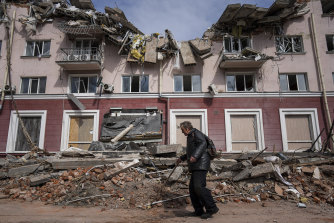 A man walks past a building damaged by shelling in Chernihiv.Credit:AP

“They were not fighting the army here,” he said in an interview from his office in the city’s historic center, which was damaged when two missiles struck nearby on February 27. “They were bombing civilians.”

Chernihiv, a regional capital, is the largest Ukrainian city besieged by Russian troops to come back under complete Ukrainian control, though residents are preparing for what they fear could be a Russian return in coming days.

On Monday, the first day a route from Kyiv to Chernihiv reopened, Washington Post reporters interviewed people who provided accounts of atrocities that echo those emerging in other cities Russians occupied, from Kyiv’s suburbs to wide swaths of the country’s east and south that remain under Russian control.

Residents described violence and brutality by soldiers that added to the growing litany of potential Russian war crimes committed during the war in Ukraine.

Russian troops arrived outside Chernihiv soon after the war’s start, only having to travel 75 kilometres by road from the border with Belarus, where they had been stationed. But the Ukrainian military managed to keep them outside the city, even though they were fully encircled.

Residents of one village near Chernihiv said that this week they buried 12 civilians and that humanitarian workers removed more than 100 bodies, mostly of soldiers, both Russian and Ukrainian. They said most of the Russians were pulled from a century-old church they had been using as a place to sleep. It had been partially incinerated after a Ukrainian drone strike hit a pile of weapons next to it. 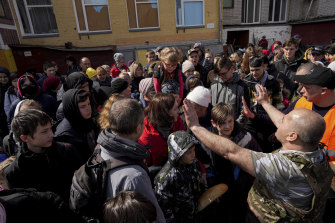 Residents wait for aid in a Chernihiv schoolyard.Credit:AP

And in the city, where it was finally safe to do so, another 56 bodies were moved out of a morgue and buried in a trench.

Unlike in towns outside Kyiv such as Irpin and Bucha, where there is a sense that Russian forces have abandoned their push on the capital, officials in Chernihiv fear that Russian troops are simply regrouping and may soon be back at the city’s edge.

The last Russians left the city’s vicinity only a few days ago, said Viacheslav Chaus, the head of Chernihiv’s military administration. He added that the military was trying to quickly establish and secure aid and evacuation corridors that they called “roads of life,” in anticipation of a Russian return.

“We don’t have that feeling of peace or calm here because the Russians can come back as quickly as they left,” Atroshenko, the city’s mayor, said. “I don’t even understand the future of the war – whether this is the end of war for us or if we just need to repair water and electricity before another attack.” 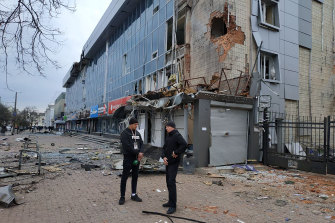 Mayor of Chernihiv Vadyslav Atroshenko, right, speaks to a journalist near the shopping mall damaged by night shelling.Credit:AP

The mayor was working in his third-floor office when a missile landed just outside.

His windows shattered, sending glass flying through the room. He dove to the floor before escaping outside. Another missile struck soon after. The two attacks damaged a children’s dentist’s office across the street and a historic cinema next door. The strikes also left Atroshenko convinced Russian forces intended to assassinate him.

As he surveyed the scene of damage outside his office he described how he now keeps his phone on airplane mode, to make it harder to track. He changes locations regularly and sleeps close to three bodyguards tasked with keeping him alive.

The strike on the mayor’s office came as Russians intensified their shelling, spurring many residents to flee to surrounding villages where they had extended family, hoping they might escape the worst of the battle for the city.

But facing stiff resistance, Russian troops were only able to encircle Chernihiv. That meant once-bucolic villages on the city’s perimeter, like tiny Lukashivka, were not a safe haven. Instead, they endured weeks of fierce artillery battles punctuated by Russian cluster bombing.

Cluster munitions, which disperse “bomblets” across a large area, are banned under United Nations convention. So many cluster munition carriers littered the village that in the days since the Russians withdrew, residents had stacked them in piles.

By March 9, Lukashivka – former population 288 – had come under control of a Russian battalion led by a man known as Titan, who residents said terrorised them with vicious beatings and mock executions.

Alexey Pavliuk, 26, described one incident in which Titan and two other soldiers stormed into his house, dragged him and a friend into the backyard, hung them by their arms with rope from a tree branch and stripped them naked before pressing guns to their chests.

“It was below freezing, but I didn’t even notice,” Pavliuk said. “I was saying goodbye to life.”

The soldiers left them hanging while they rifled through Pavliuk’s house and stole everything of value, Pavliuk said. Then, unexpectedly, they cut the ropes.

As Russian losses in the village mounted, the violence against civilians worsened. Titan found Horbonos’s father-in-law, Anatoly, 70, walking one evening. Anatoly recalled how Titan forced him to guzzle from his vodka bottle then slammed his rifle butt into his stomach twice, rendering the old man unconscious.

“We’ve lost 30 men today, so now you will suffer for it,” he remembered hearing Titan say before he lost consciousness.

Inside the city, as the siege dragged on, volunteers risked their lives to deliver water. Using a portable generator, they let desperate residents charge their phones to call family to confirm they were still alive. Despite their efforts, many residents died not only from shelling but because they were unable to access essential medicines, hospital employees said.

Many of those wounded in Russian attacks inside the city remain inside Chernihiv City Hospital Number 2 – their families often staying there with them because their homes were destroyed.

Bohdan Rozhylo, 40, who leads the hospital’s trauma unit, said the last month has been “the hardest of my life.”

His patients include Volodymyr Shyk, who on March 16 joined a queue of some 100 civilians waiting in line for bread. After around an hour of waiting, Shyk said, intense shelling hit the wall of the supermarket, throwing him to the ground. Shrapnel tore through his knee and broke his shin.

“I saw blood everywhere,” he said. “Twelve people didn’t stand up. They were killed instantly.” Bystanders helped evacuate him and dozens of others who were wounded to the hospital.

But even there, they had no respite.

The next day, Russian shelling and mortar fire struck the hospital, shattering windows and doors, filling the corridors with smoke and wounding some patients and staff in what hospital director Vladyslav Kukhar said he believes was an intentional attack. Russian forces have repeatedly struck hospitals throughout the country.

“I am 63-years-old and have never witnessed such a thing,” Shyk said of the two attacks. “I would classify it as an atrocity against civilians.”

Medical workers picked shards of glass out of the faces, arms and legs of civilians wounded in the breadline. On Monday, the windows of the hospital remained boarded up and artillery damage was visible on the walls and ceilings inside.

The US Embassy in Ukraine issued a statement decrying the March 16 attack, accusing Russian forces of killing at least 10 civilians. Russian officials said footage of victims amounted to a “hoax launched by the Ukrainian Security Service.”

On Monday, Shyk lay in a hospital bed, surrounded by other civilian men wounded in the city. One had been struck with shrapnel while bringing fresh produce to his wife. Another said a cluster munition landed a few feet from him while he delivered water to civilians.

Gregory Liudnyi, 63, had just biked home from a food handout around 7.30pm on March 4 when he heard explosions in the distance. Rockets struck a telephone pole outside his house, sending a hail of shrapnel flying toward him.

More than a month later, he remains in the hospital – his right leg amputated at the knee despite two surgeries to try to save it. The brutality of the war has left him with “a hard feeling in my soul,” he said. To find work with just one leg, he said, will be nearly impossible.

In the bed next to him lay Valentyn Osypenko. On March 15, he and his wife, Svitlana, heard the roar of a jet pass over their house on the outskirts of town. With the power out, no air raid sirens went off. Still, they fled outside with their son and two neighbours to try to reach a nearby shelter. But they became trapped outside just as three cluster munitions fell on their backyard.

They covered their son, Ruslan, 17, with their own bodies. He escaped without injury, but they were both badly wounded.

Ruslan had to apply a tourniquet to his father’s leg as they waited for a ride to the hospital. One of their friends lay dead beside them.

“I think it was intentional that they hit civilian targets,” Valentyn said, showing the wounds to his right leg that remained covered in bloody bandages weeks later. “Our house is destroyed, our car is burned down.”

Svitlana, whose foot was broken, hobbled into Valentyn’s room on crutches and sat beside Ruslan on the next bed.

“We don’t know what we did to deserve this,” she said.

At the morgue behind the hospital, 13 bodies remained unclaimed in a refrigerator truck on Monday, wrapped in blankets and plastic sheets. The victims still wore the clothes they were killed in – boots, sweaters, a black winter coat. A passport lay on one’s chest.

Relatives have been unable to collect them, maybe because they fled, or are still too afraid to venture out into the city – or because they too were killed.