Home » World News » ‘If I have a choice, I would quit’ says Hong Kong’s leader

‘If I have a choice, I would quit’ says Hong Kong’s leader ‘If I have a choice, I would quit’ says Hong Kong’s embattled leader as she apologises for her role in unleashing ‘unforgivable havoc’ in speech to business leaders

Hong Kong’s leader Carrie Lam has said she would step down if she could for causing ‘unforgivable havoc’, in a recording of a speech she delivered last week.

Her voice fraught Lam is heard to address a group of business people in English, ‘deeply’ apologising for the unrest in the city as violent clashes continue demanding democratic reform.

She can be heard saying: ‘I make a plea to you for your forgiveness.

‘I’ll be very honest with you, it would be naive of me to paint you a rosy picture that things will be fine or I have a deadline.

WHAT DO HONG KONG PROTESTERS WANT?

Apart from the resignation of Chief Executive Carrie Lam, Hong Kong demonstrators have listed five demands and have continued to urge the government to respond to them.

These five demands are:

1. A complete withdrawal of the extradition bill

2. A retraction from the government to its characterisation that the protesters were ‘rioters’

3. Unconditional and immediate release of protesters who were arrested and charges against them dropped

4. Establishment of an independent inquiry to investigate police violence during clashes

‘But I can assure you that Beijing does not have a deadline. They know this will ripple on.

‘They and ourselves have no expectation that we can clear this thing before the first of October.

She assured the group that military action would not be taken.

Adding: ‘It is my own feeling that (central people’s government) has absolutely no plan to send in the PLA (People’s Liberation Army).’

‘I do have a solution, that is a political one.’

She went on to add that as Chief executive her room for maneuver while serving two masters, both the CPG and the people of Hong Kong, is now ‘very very limited’ as the situation had risen to levels of ‘unprecedented tension’ considered a national security issue.

The leader admitted that given a choice she would step down.

Lam said: ‘If I have a choice, the first thing is to quit, having made a deep apology.’

Reuters sourced the clip which suggests Hong Kong’s government is facing a struggle in retaliation with Beijing as the two economic powers square up. 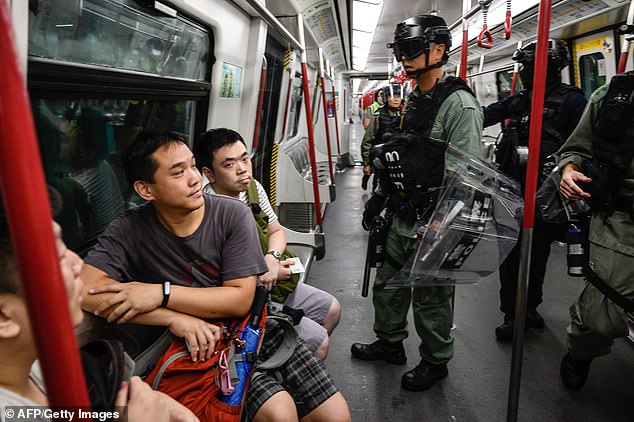 The last unrest to unsettle Beijing on such a large scale was the Tiananmen Square protests in 1989.

Ms Lam insists she remains strong in leading Hong Kong while reports suggest she has become a puppet of the Communist party in the heat of the crisis.

Following the outbreak of the anti-government protests the city leader expressed her sadness that she could no longer walk in the city or visit salons, because of the anger directed at her government. 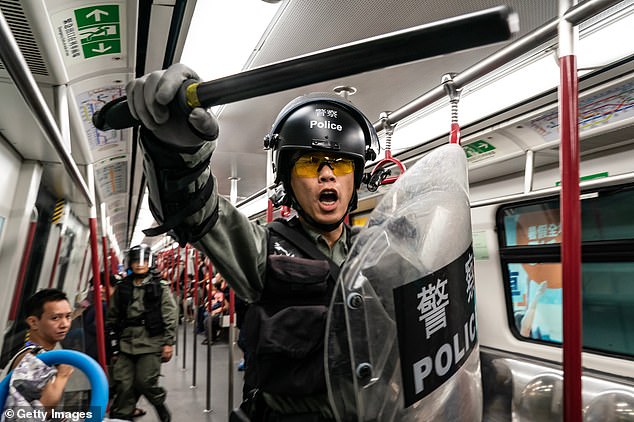 A riot police officer charges onto a train at the Tung Chung MTR station after protesters block the transport routes to the Hong Kong International Airport in Hong Kong, China following another night of violent protests 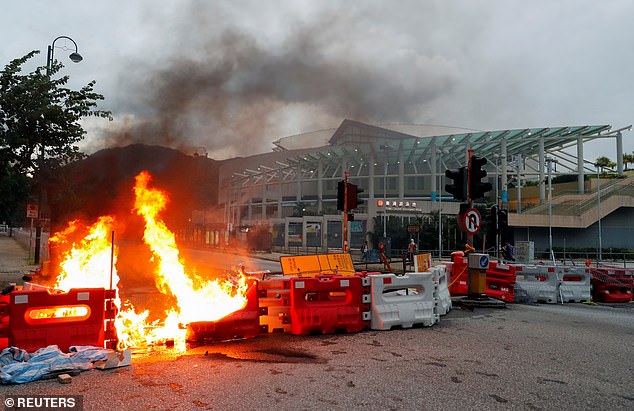 Yesterday Hong Kong police announced they had arrested 159 people this weekend, one of whom was a 13-year-old found with petrol bombs, reports The Telegraph.

China’s foreign ministry spokesman, Geng Shuang, spoke out yesterday calling the demonstrations in Hong Kong ‘past the scope of freedom of assembly.’

In a media conference last month Lam faced an unprecedented media onslaught at as she warned violent protests were driving the city down a ‘path of no return’. 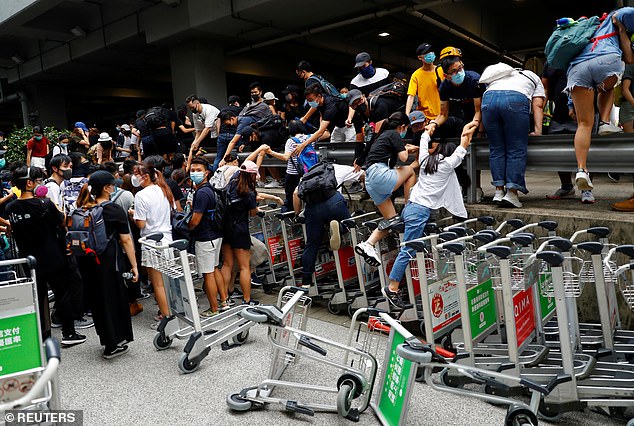 People ran away from riot police outside the terminals yesterday, climbing over baggage trolleys and onto higher ground

One after another journalists fired tough questions to the city’s Chief Executive, challenging her authority and abilities to handle the ongoing unrest that have left the financial hub in its worst turmoil since its handover from Britain to China in 1997.

One journalist queried ‘Do you have a conscience?’ while another yelled ‘Mrs Lam, many citizens have been asking recently when you will die’.

Hundreds of demonstrators gathered outside Hong Kong’s international airport yesterday to disrupt travel and try to bring global attention to their fight for democracy following another night of violent protests. 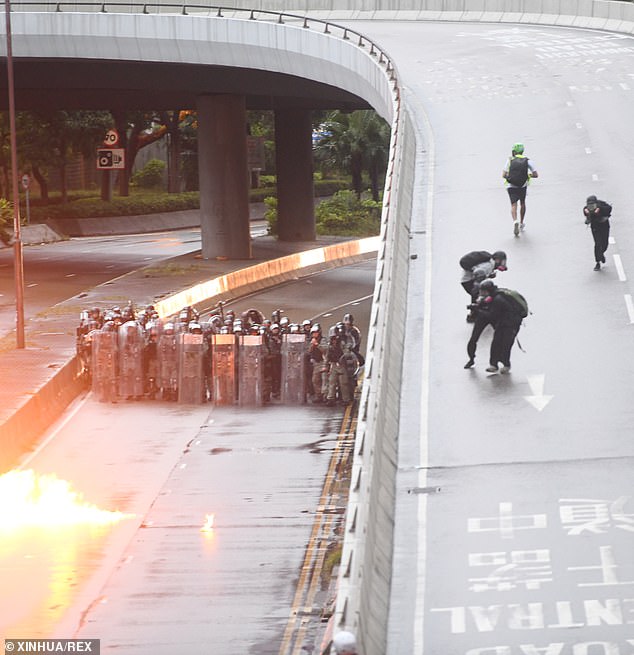 Operators of the Airport Express train said it had suspended services this afternoon, while black-clad protesters – hiding from CCTV cameras under umbrellas – built barricades at the airport bus station.

Planes were taking off and landing with delays, but some passengers were forced to walk the last bit of their journey to the airport by foot, dragging their luggage behind them.

The MTR subway station in Tung Chung was closed and demonstrators smashed CCTV cameras and lamps with metal poles and dismantled station turnstiles. 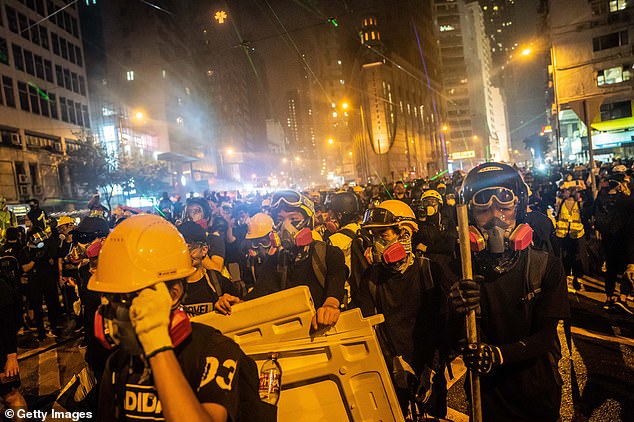 Hundreds of people took to the streets of the Admiralty district, pictured, and a huge fire burned for over an hour in the city’s commercial district during another night of protests

Protesters outside the airport today chanted ‘Fight for freedom! Stand with Hong Kong!’ as riot police watched on from inside the terminal building.

At least 26 flights from Hong Kong and 17 to the city had been canceled as of 7.55pm local time, the South China Morning Post newspaper reported, citing information from the airport.

Passengers arriving downtown on a ferry from Lantau Island, where Tung Chung is located, were being searched by police and asked for identity cards, the newspaper said.