Home » World News » HS2 extension to Leeds 'will be scrapped to save £40bn', reports say

HS2 extension to Leeds 'will be scrapped to save £40bn', reports say 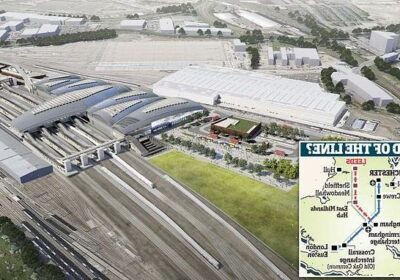 ‘Not in our lifetimes’: HS2 extension to Leeds will be scrapped to save £40bn on the ‘hugely expensive white elephant’, reports say

The eastern leg of the HS2 will ‘never be built in our lifetimes’ and is set to be axed to save the high-speed railway project £40billion, a Government source has claimed.

The comments come after several leaks from Whitehall this summer which have suggested plans to extend the HS2 to Leeds will be scrapped – despite the northern city having already started work on a £500million station.

Other projects in the Yorkshire capital are also relying on the project – which one Tory MP dubbed a ‘hugely expensive white elephant.’

Last month the prime minister was warned voters in ‘Red Wall’ constituencies would be furious at the idea of the Leeds leg being shelved. 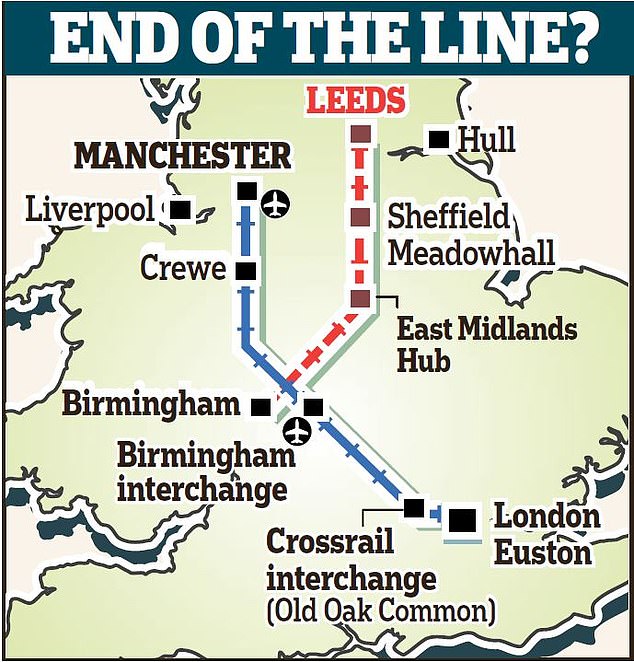 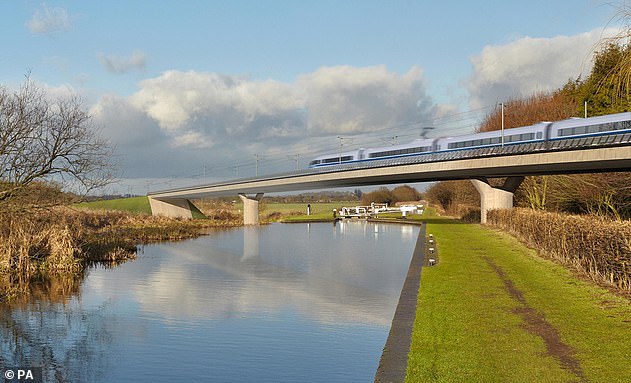 But a source told the Sunday Mirror: ‘They might make some announcement about doing the work in the future but everyone involved knows the truth.

‘They have run out of cash and there’s no way we’re going to see this built in our lifetimes.’

Meanwhile the Department for Transport insists the eastern leg has not been shelved, saying the much-delayed integrated rail plan will ‘soon’ outline the way ahead for major rail projects – including HS2’s western leg to Manchester.

It comes as northern leaders warned the goal of levelling up the economy would be made difficult to achieve if HS2 did not extend to the likes of Leeds, Sheffield and north-east England.

Henri Murison, the director of the Northern Powerhouse Partnership, which represents northern businesses, said: ‘Without the western and eastern legs to Manchester and Sheffield on to Leeds as well as into north-east England, the whole of HS2 will be undermined in achieving its full economic benefits.’ 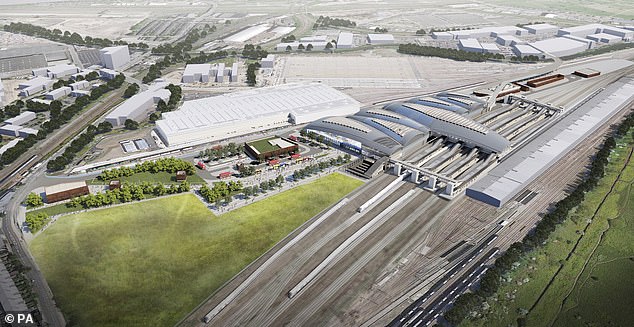 CGI image of proposed Old Oak Common station in west London, which will be part of HS2 route connecting the capital to Birmingham and Manchester

The HS2 eastern leg was set to link the first phase of the project – a rapid rail line from London to Birmingham – with Nottingham, Sheffield and Leeds.

Initially, phase two was set to extend the line from Birmingham to Manchester via Crewe – the so-called western leg.

Tracy Brabin, the mayor of West Yorkshire, said: ‘The government cannot talk about levelling up and a commitment to the north without addressing the decades of underinvestment across our transport networks.

‘The eastern leg of HS2 is essential to providing the rail services that work for our communities, as part of a joined-up transport system that connects people to better jobs, better education, and more opportunities.’

Planning and consultation for the eastern route lasted 10 years and won cross-party support.

Leader of Leeds city council James Lewis said: ‘I will be hugely disappointed if we are back to the drawing board. 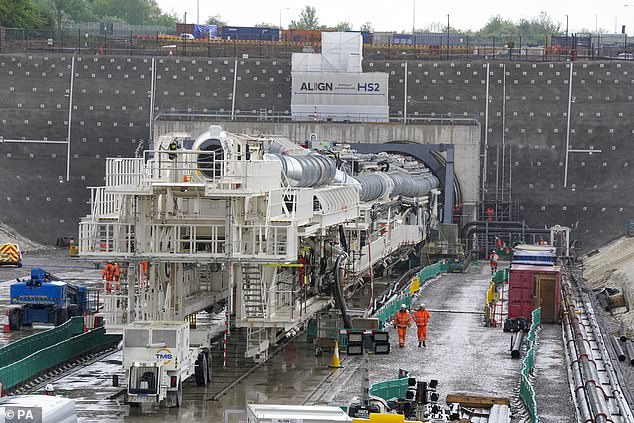 The Prime Minister was previously warned voters in ‘Red Wall’ constituencies would be furious at the idea of the Leeds leg being shelved (Pictured: PM Boris Johnson on site of a part of HS2)

‘The constant pipeline of projects in London moving forward suggests that levelling up isn’t in operation.’

But his sentiment is not shared by all in Yorkshire, with Conservative MP for Rother Valley Alexander Stafford content with the idea of the eastern leg being shelved.

Mr Stafford said: ‘What we need is the money invested in transport infrastructure that might actually bring a tangible benefit to seats like mine.

‘We need a better bus service and better links to Manchester across the Pennines rather than a hugely expensive white elephant that is sucking resources out of areas like mine and will only benefit a tiny number of people living in central Leeds.’

And Transport for North revealed in October that scenarios the Government was considering ‘all fall short of what is needed for full funding of HS2’ – before the company constructing HS2 (HS2 Ltd), was ordered to pause work on the eastern line in July this year.

Mr Murison said the prime minister, chancellor and transport secretary have not yet formally discussed the integrated rail plan – meaning the eastern leg is not officially dead yet.

‘A number of advisers in Whitehall have never liked this project, and told newspapers regularly on Sundays the project would be cancelled before the prime minister fully recommitted to it,’ he said, adding that the Government should complete the whole project as planned, but ‘building from the north down.’

Mark Goldstone, of the West and North Yorkshire Chamber of Commerce, said earlier this month: ‘It’s time for the Prime Minister to be honest with communities and businesses across the North about what his intentions for levelling up actually mean.

‘HS2 is a key component of wider infrastructure plans.’

Businesses have been urging the Government to publish the much-delayed Integrated Rail Plan, which is expected to reveal intentions for a string of projects including HS2, Northern Powerhouse Rail and the Midlands Rail Hub.

‘If we are to level up all parts of the UK, it is essential HS2 is delivered in its entirety.’