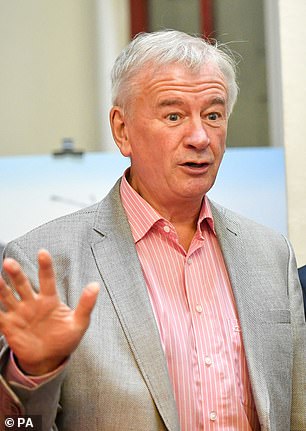 Sir Terry Morgan (pictured), 70, could leave his role as head of both HS2 and Crossrail within days

The boss of HS2 who could be sacked in just days has admitted there is ‘still a lot of work to do’ to deliver the £56billion rail project on time and in budget.

Sir Terry Morgan, who is also the boss of London’s troubled Crossrail, said that it will now be ‘very difficult’ to make sure the line is built within its price.

He said that rail bosses were confident the high speed line, on which trains will travel 250mph, would eventually be deliver – but it would be a ‘big challenge’ to hit government targets

Sir Terry Morgan has only been chairman of the controversial HS2 for four months but is expected to get the chop after his poor performance was flagged to Prime Minister Theresa May.

He is also in charge of the £15billion Crossrail project, which has been plagued by repeated delays and will nine months behind schedule.

His expected sacking from both projects comes following suggestions from both Chris Grayling, transport secretary, and chancellor Philip Hammond that Sir Terry be removed from his post.

And is just months after the transport secretary hailed Sir Terry as ‘world-class’ when he appointed him to the top position.

HS2 (High Speed 2) is a plan to construct a a new high-speed rail linking London, West Midlands, Leeds and Manchester. Pictured is an artist’s impression of how the new line might look once up and running 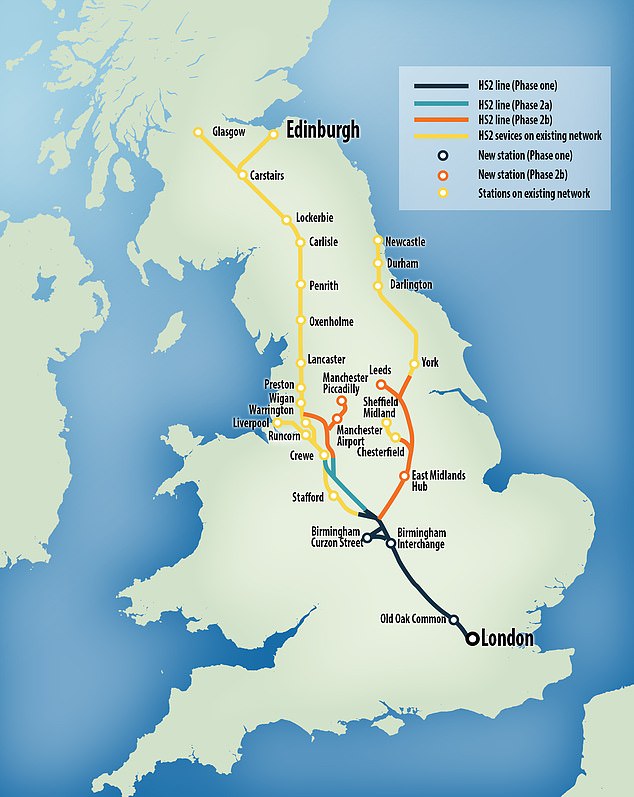 Phase one, between London and Birmingham, is currently due to open to passengers by 2026. While phase two is scheduled for full completion in 2033

Sir Terry said: ‘What is true is that the scope, the time and the cost has been predetermined,’ The Times reported.

He added: ‘What the team at HS2 is trying to do at the moment is to square those facts off.

What is HS2 and when did work first start on the project?

HS2 (High Speed 2) is a plan to construct a a new high-speed rail linking London, West Midlands, Leeds and Manchester.

The line is to be built in a ‘Y’ configuration. London will be on the bottom of the ‘Y’, Birmingham at the centre, Leeds at the top right and Manchester at the top left.

The idea for a second high-speed line was proposed in 2009 by the Department for Transport under the Labour Government.

It was to be developed by a new company, High Speed Two Limited (HS2 Ltd).

Early in this year, the government confirmed the route the new line would take.

Work on Phase One began in 2017 after the project was given royal assent.

The government plans envisage the line being operational by 2026.

The first trains scheduled to be used on the project are set to arrive for testing.

The first passengers are scheduled to travel on HS2.

How much has the project cost?

Last year’s annual report showed that the company established by the government to build the railway spent £500 million in the year to March 31 – up almost 30 per cent from £352.9 million the year before.

Separate accounts published by the Department for Transport also showed it had spent another £366 million on HS2.

The bulk of this was on compensating individuals and businesses who own property and land near the planned line.

‘It’s very difficult. It’s not impossible but there is still a lot of work to do but it’s too early to create crises around this programme. It is still at a very formative stage.’

Sir Terry also said that he was ‘disappointed’ by the way he had been treated by Mr Khan, who he said knew about the delay to Crossrail more than a month before it was publicly announced.

He said that problems with new trains were behind the delay and they were the mayor’s responsibility.

He said: ‘In my mind I am not leaving HS2 over anything that I have done in the context of HS2.

‘I think personally, given the scale of the project and its importance to the UK, there was a concern that what’s happened on Crossrail might in some way undermine the position on HS2.’

Main building work was due to start on HS2, which is Europe’s biggest infrastructure project, this month but it has been put off until at least June to get spending back on track.

Sir Terry said that he had ‘nothing against’ Mr Grayling.

He said: ‘When I took the HS2 job I didn’t know about the scale of the problems we would have on Crossrail.

‘So I respect the secretary of state’s right to make the decision on whether he has got the right chairman or not.’

It was initially estimated to cost £56billion, but several senior ministers are said to privately fear it could exceed £100billion.

It is to be built in a ‘Y’ configuration. London will be on the bottom of the ‘Y’, Birmingham at the centre, Leeds at the top right and Manchester at the top left.

Work on Phase One began in 2017 and the government plans envisage the line being operational by 2026.

It has prompted fears of potential cuts to infrastructure spending from unions and criticism from the Stop HS2 Campaign who branded HS2 as ‘a mess, it’s always been a mess’.

Sir Terry has been chairman on the Crossrail project since June 2009.

It was announced on August 31 that the capital’s new east-west railway will open in autumn 2019 rather than December this year to complete infrastructure and testing.

Addressing the delay, a spokesman for Crossrail Limited said in August: ‘The revised schedule is needed to complete the final infrastructure and extensive testing required to ensure the Elizabeth line opens as a safe and reliable railway.’

The project’s budget was increased from £14.8 billion to £15.4 billion in July due to ‘cost pressures’. It is being predominantly funded by Transport for London (TfL) and the Government. 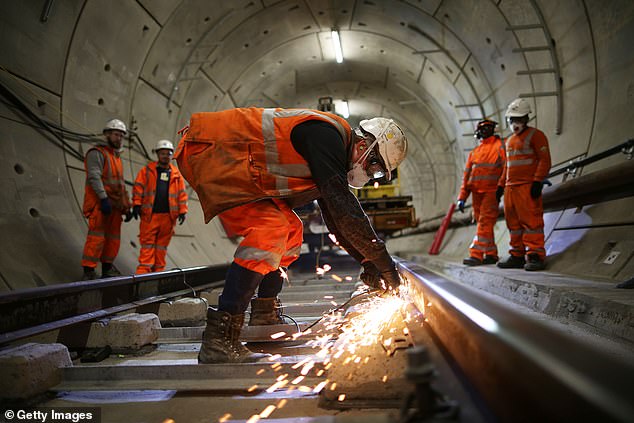 Work is scheduled to continue on the Crossrail line until autumn next year, as bosses say extra time is needed for testing

The Elizabeth line will add 10 per cent to central London’s rail capacity, and the project is estimated to boost the economy by an estimated £42bn.

Once open it will allow journeys between Reading in the east and Shenfield in the west – all the way to Essex.

Another journey could take people from Heathrow Airport in the east to Abbey Wood in the west.

The autumn opening will only see the central section of the Elizabeth line open.

The focus remains on opening the full Elizabeth line, from Reading and Heathrow in the west to Shenfield and Abbey Wood in the east, as soon after the central tunnels open as possible.

The new Elizabeth line trains are already operating between Shenfield and Liverpool Street and between Paddington and Hayes & Harlington, in readiness for the full opening.

The complete history of Crossrail: How project was first envisioned in 1880… to be built nearly 100 years later

1880  The idea for a scheme like this actually began more than one hundred years ago, with a company called the Regents Canal & Railway Company which lobbied for permission to build a railway that would link Paddington with London’s docks.

1974 The idea was not forgotten as London continued to grow and flourish. In the 1974 London Rail Study, published by the then Greater London Council and Department for Environment, the line finally got a name – Crossrail.

Unfortunately, the study estimated the cost of such a scheme at £300m, and thus although it recommended feasibility studies be undertaken as a priority, it could do little more.

Although the 1980 discussion paper ultimately led to nothing, the looming threat of Underground congestion that both it and the 1974 study had highlighted continued to develop.

1989  The government commissioned and published the Central London Rail Study in 1989 – a report which took many of the schemes highlighted in the 1974 study and developed them into more concrete schemes.

In November 1991, a private bill was submitted to Parliament. The cost of the Crossrail scheme was given as just over £2bn at 1993 prices

The onset of the recession in the early 1990s, combined with the increased constraints on public finances, proved key factors that lead to Parliament rejecting the Bill in May 1994.

1994 In July 1994 it was announced that the Crossrail project would be pushed forward under the Transport and Works Act (TWA) system, which had replaced private bills as the procedure by which large infrastructure projects could be brought about.

Before the draft order was lodged, however, the Government commissioned a further study to determine whether any smaller scale alternatives could achieve the same benefits as Crossrail.

2000  Cross London Rail Links Ltd (CLRL), jointly owned by the SRA and Transport for London (TfL), was set up to undertake project definition work on a Crossrail link and a feasibility study of a possible Hackney-southwest London scheme. CLRL’s initial budget was set at £154 million and the company was launched in January 2002.

2005 A Crossrail Hybrid Bill was presented to Parliament in February 2005 and the principle of the scheme was established at the second reading debate in July.

2009 After 35 years of planning and development, Crossrail finally broke ground on 15 May 2009 at Canary Wharf, when the Mayor and the then Transport Secretary Lord Adonis launched the first pile into the North Dock in Docklands at the site of the new Canary Wharf station.

2012 Crossrail tunnelling began in May 2012 and ended at Farringdon in May 2015 with the break through of tunnelling machine Victoria.

2018 All of the permanent track was installed and the new Elizabeth line trains were being tested using the line’s new automatic train control system which operates in the central section of the route.

The line was due to open in December but has been delayed for further testing to be carried out.