How to return dignity to the sullied icon that is Everest Along with our Great Barrier Reef and America's Grand Canyon, Mount Everest is commonly and justifiably included in the list of the world’s greatest natural wonders. Like the former two, it’s the whole Everest massif, not just its singular, pre-eminent summit that constitutes this wondrous phenomenon. The stellar cluster of adjacent peaks and the glaciers they feed; on the southern, Nepal side, the valleys carved deep by tumbling rivers, cloaked in rich and distinct altitude-graduated vegetation; on the other side, the starkly different, high undulating plateau of Tibet, where aridity lies bare, the bones of the earth exposed to the thin cold air and intensely bright high-altitude light. All add to the richness and complexity. 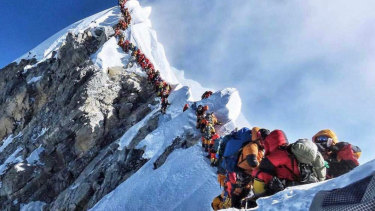 Mountain climbers lining up to stand at the summit of Mount Everest this climbing season.Credit:Nirmal Purja, Project Possible

The record numbers of ascents this year have been accompanied by a predictable increase in fatalities, many of them attributable to the overcrowding caused by unregulated numbers of minimally experienced climbers whose main qualifier has been to have deep pockets.

Above Base Camp all human bodily waste simply stays there to be desiccated and blown about with the snowflakes until eventually brought down into the valley entombed in the glacier. Nowhere else on earth is such a natural treasure treated with such disregard for the impact of overcrowding. Rafting down the Grand Canyon is strictly controlled to preserve its natural integrity, numbers on America’s highest peak Denali are restricted and strict environmental guidelines are enforced, similarly popular walking trails around the world, including in Australia, have limits.

But Nepal is a poor country and officials are not inclined to limit numbers on Everest because they say it would result in a loss of revenue. For many years now, experienced climbers like myself have been lobbying the government to make changes. 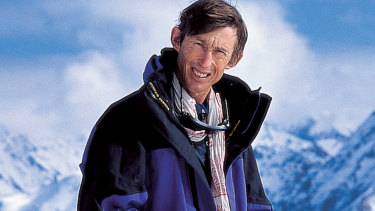 Along with other climbers, Tim Macartney-Snape has been asking the Nepalese government to tackle overcrowding on Everest.

To me there is an elegant solution that should not result in any loss of revenue but would spread the windfall to mountain villages below lesser peaks across the country. The rules could be changed so that there’s a process of qualification requiring aspirant "Everesters", or those wanting to ascend any of the other increasingly popular 8000-metre peaks, to first climb a designated 6000-metre mountain away from the Everest region followed by climbing a similarly designated 7000-metre mountain.

As well as spreading the economic benefit and seeing more of these these hardy, wonderful people enjoy glass in their windows, it would automatically reduce numbers on Everest and give those who eventually qualified at least a safe foundation of experience. Finally some dignity would be returned to a sullied icon.

Tim Macartney-Snape is a mountaineer and author.  He and Greg Mortimer were the first Australians to reach the summit of Mount Everest. They did so without oxygen.