Her autobiography, Becoming, was part of the biggest publishing deal in history, worth £51million. 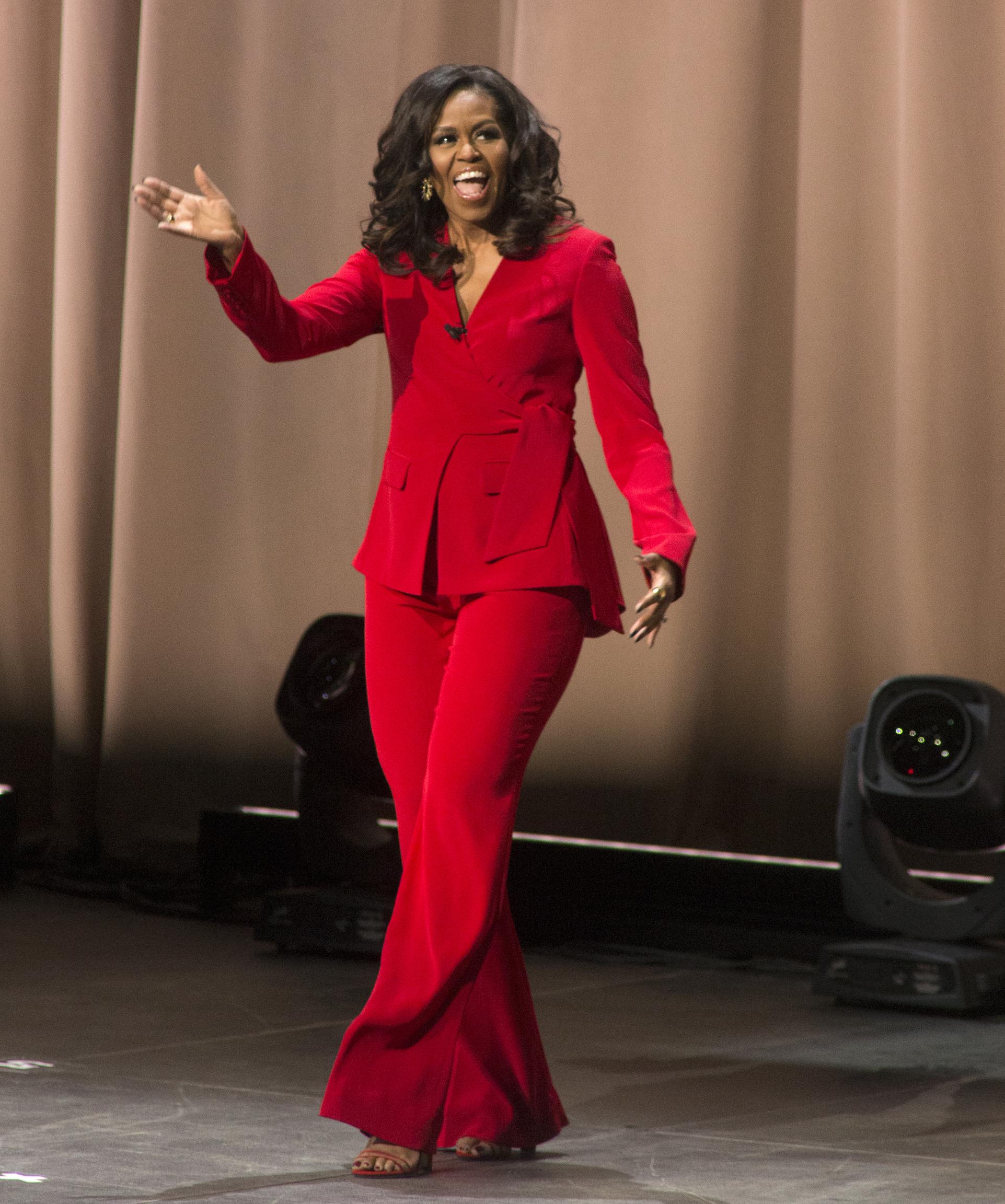 In its first week it sold a whopping 1.4million copies and it’s already on its sixth print run, even though it was published less than a month ago.

Her ten-city book tour of the US sold out stadium-sized venues, with a star-studded string of hosts including Sarah Jessica Parker and Oprah Winfrey.

Meanwhile, her appearance at London’s Southbank Centre this week was the hottest show in town, with tickets being bought on the black market for £7,000.

It turns out that as well as being a style icon, with enviably toned upper arms, Michelle is seriously inspirational — and we are hanging on her every word. 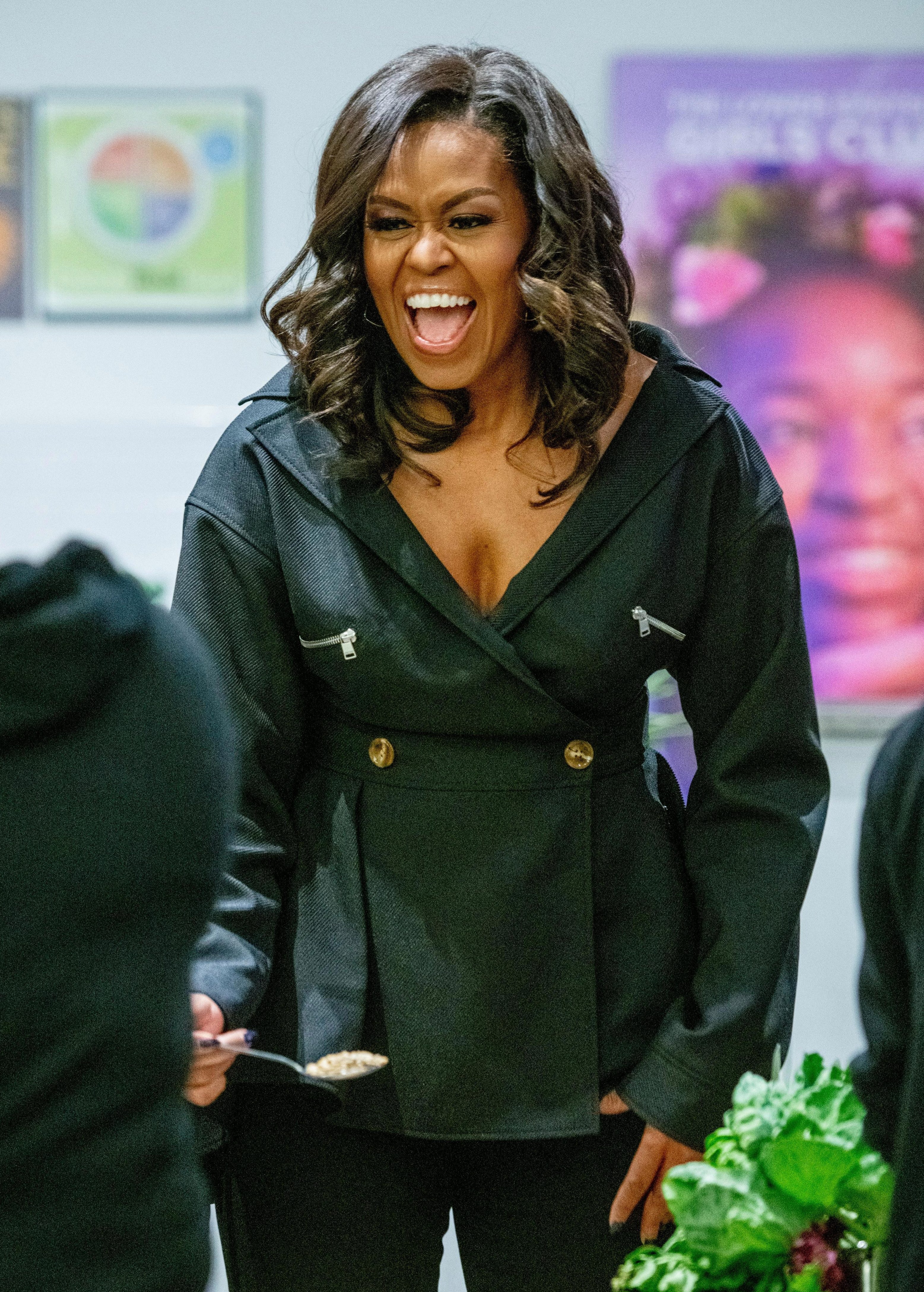 I had the pleasure of meeting Michelle’s husband when he was president.

He is incredibly charismatic and an amazing speaker, there’s no doubt about it. But having spent the past decade or so inhabiting the role of supportive wife, Michelle has found her voice and her wings — and she is flying.

It’s her moment now and, to Barack’s credit, he is letting her enjoy every moment of it without trying to upstage her.

Michelle has always been a force for good, campaigning for brilliantly worthy causes. Her Let’s Move health campaign was dedicated to solving the obesity crisis in a generation. And she has tirelessly championed girls’ education globally. She’s always been a powerful advocate for, and promoter of, women. 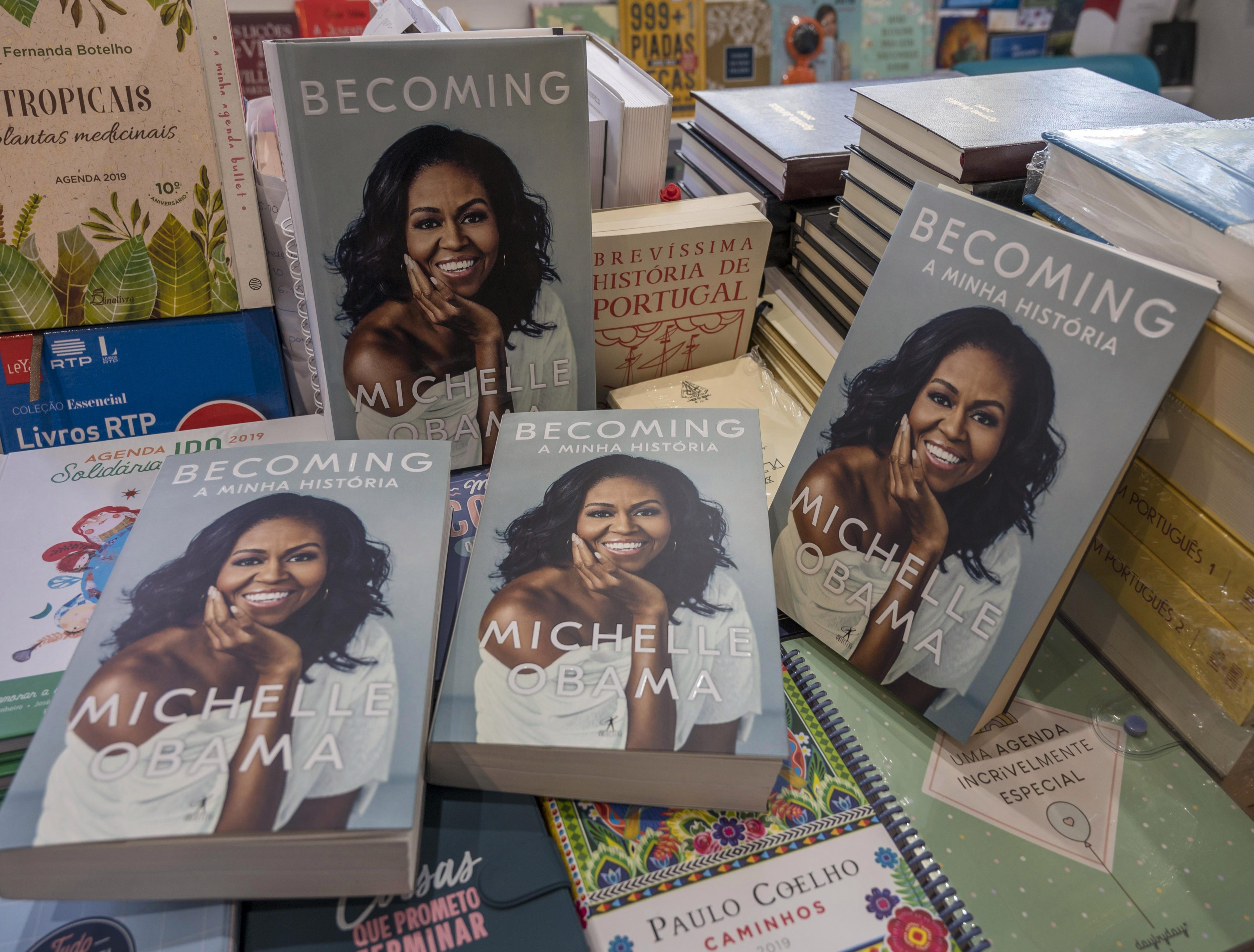 When you think her husband had what is basically the biggest job in the world, you can see that it might be hard to escape that shadow.

But when she talks to other women there is a genuineness to her that we all relate to.

And, somehow, in the two years since Barack Obama stepped down from office, Michelle has transcended the role of First Lady of America and become a symbol of inspiration and hope — an ambassador for women everywhere.

It’s hard to find anyone willing to say a bad word about her. 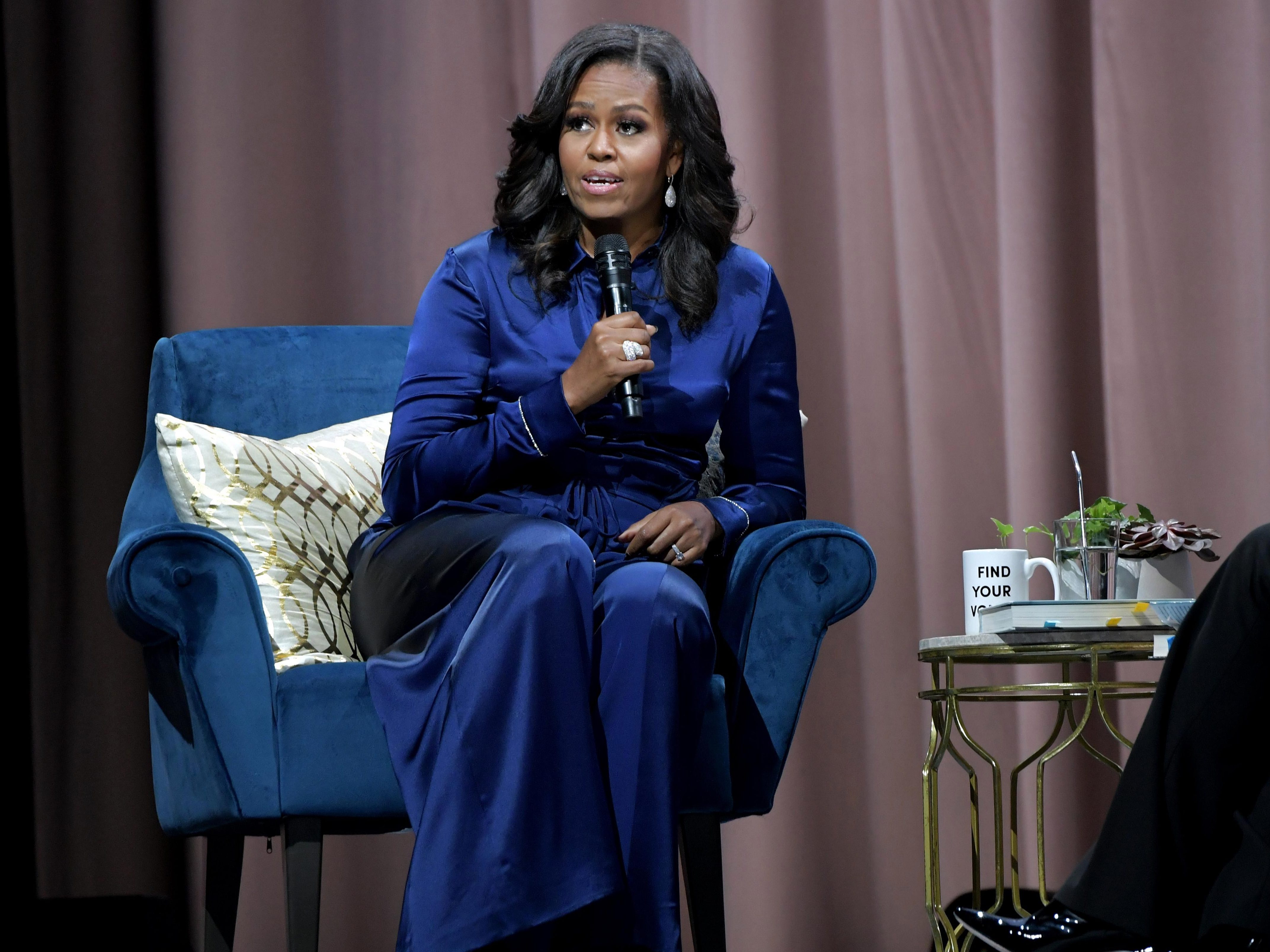 “When they go low, we go high” is probably Michelle’s most famous quote. But she is also famous for saying this: “There is no limit to what we, as women, can accomplish.”

That message — that with hard work and focus we can do whatever we want to do — is tremendously compelling.

She is leading by example as she travels the world talking to rooms full of people hanging on her every word. She is also a realist though, which is one of the most refreshing things about her.

Last week at an appearance in Brooklyn, she said that marriage inequality can’t be solved by women “leaning in” because “that s*** doesn’t work all the time”. 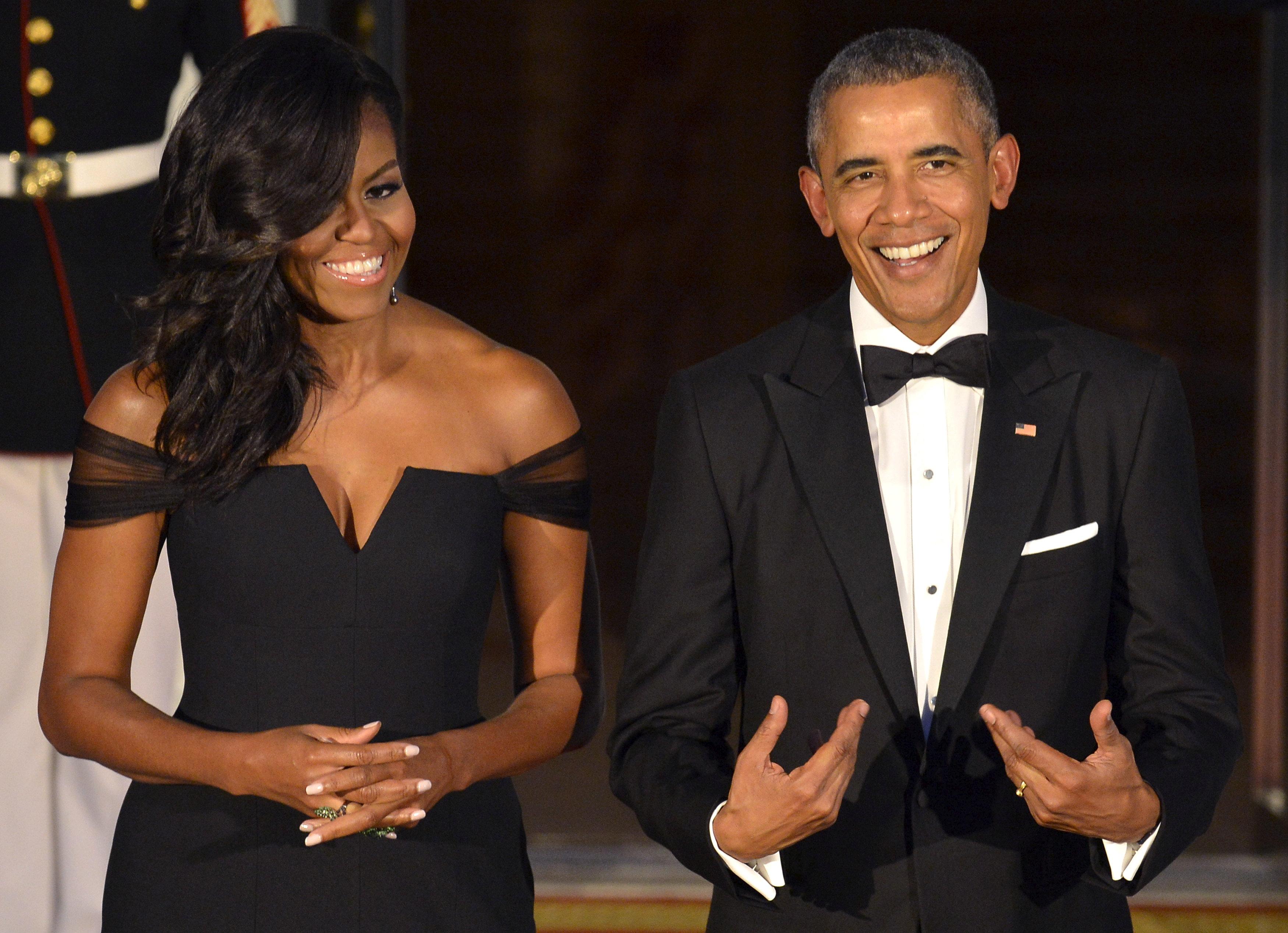 She was commenting on whether women can experience equality in both their marriage and the workplace. Or as she referred to it: “That whole, ‘So you can have it all’.”

“Not at the same time,” she said, telling it like it is. Because, let’s face it, the majority of people are married, most people work and, more often than not, it’s still women who take up the slack.

Comparisons are odious but it’s hard not to notice that there is a stark contrast between Michelle and Melania Trump.

Michelle is the epitome of a strong woman, physically and mentally. She is well educated and stands up for herself and women and girls everywhere. She is an emblem for the rise that women are having at the moment.

Melania, on the other hand, might turn up and (reluctantly) smile but while the lights are on, it’s hard to know if anyone is home.

Barack Obama is a great man. But Michelle is perhaps a reminder that behind every great man is a great woman — and we are lucky to have her as an international role model.

To think that the world used to see her as just a pretty pair of biceps.

Own goal for sexist sports

IMAGINE for a moment that a really talented footballer – let’s call him David – grew up wanting so badly to be a professional player that he devoted every spare moment to working on his game.

Imagine that dedication paid off and he grew up to become a professional so talented that by the age of 23 he had scored 300 goals and was awarded the game’s biggest individual award, the Ballon D’or. 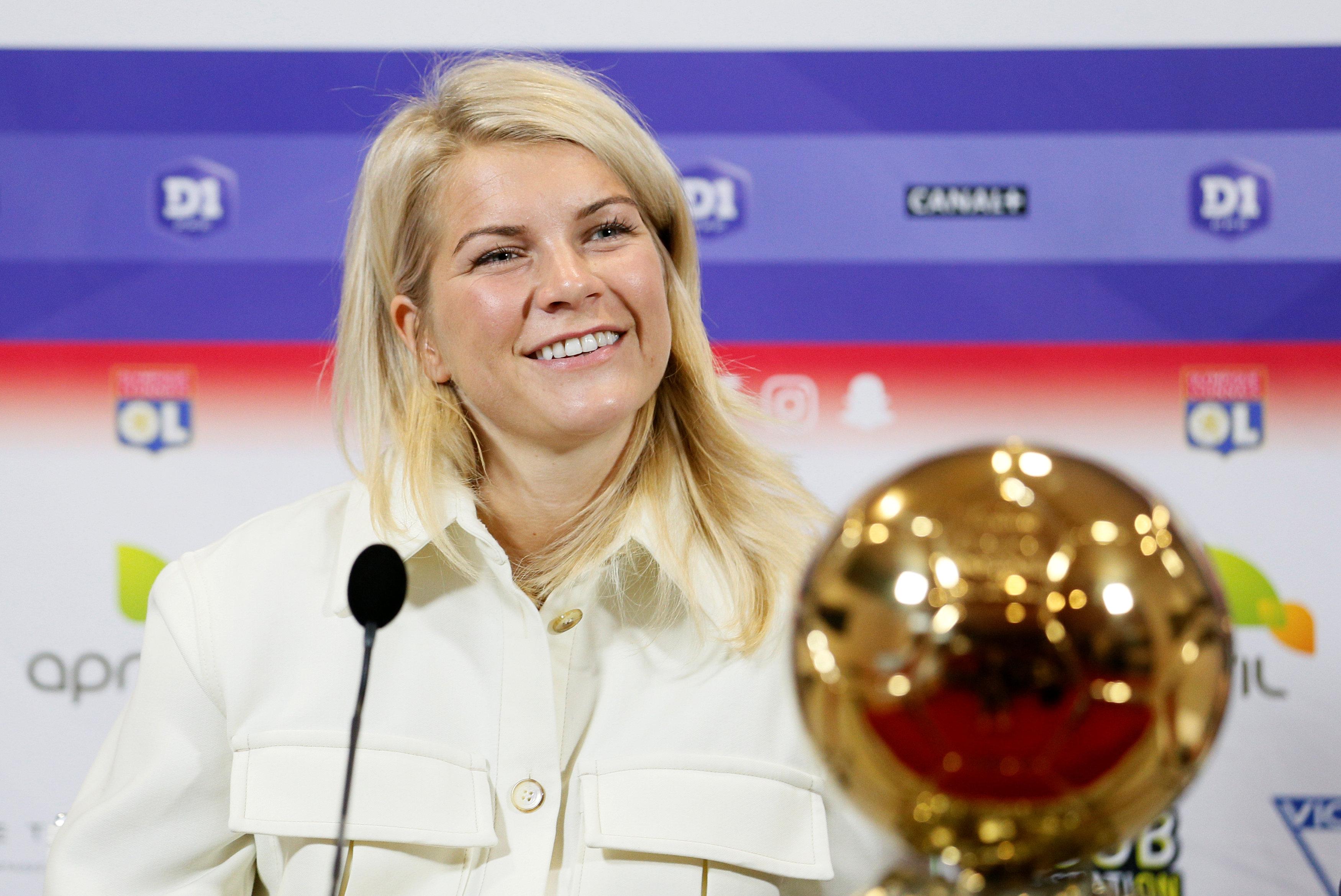 Now imagine that, instead of focusing on his professional prowess, the presenter of the award in Paris asked David: “Can you twerk?”

But that is exactly what happened when Ada Hegerberg, was awarded the Ballon D’or women’s award by French DJ Martin Solveig this week.

Instead of focusing on her achievement, he asked whether she’d twerk, thus detracting from the award he was handing over.

Her response – a cool “No” – was a suitable mix of disdain and disappointment, while her face said what we were all thinking: “What a jerk!”

Asked about it afterwards she played it down, saying she’d just been happy to win the award and was enjoying her prize, thus bringing the point back to her achievement rather than the fatuous comment of a sexist idiot.

No doubt the Norwegian ace gets this kind of thing a lot.

When I started in the business of football my first question from a journalist was: “What are your vital statistics?” 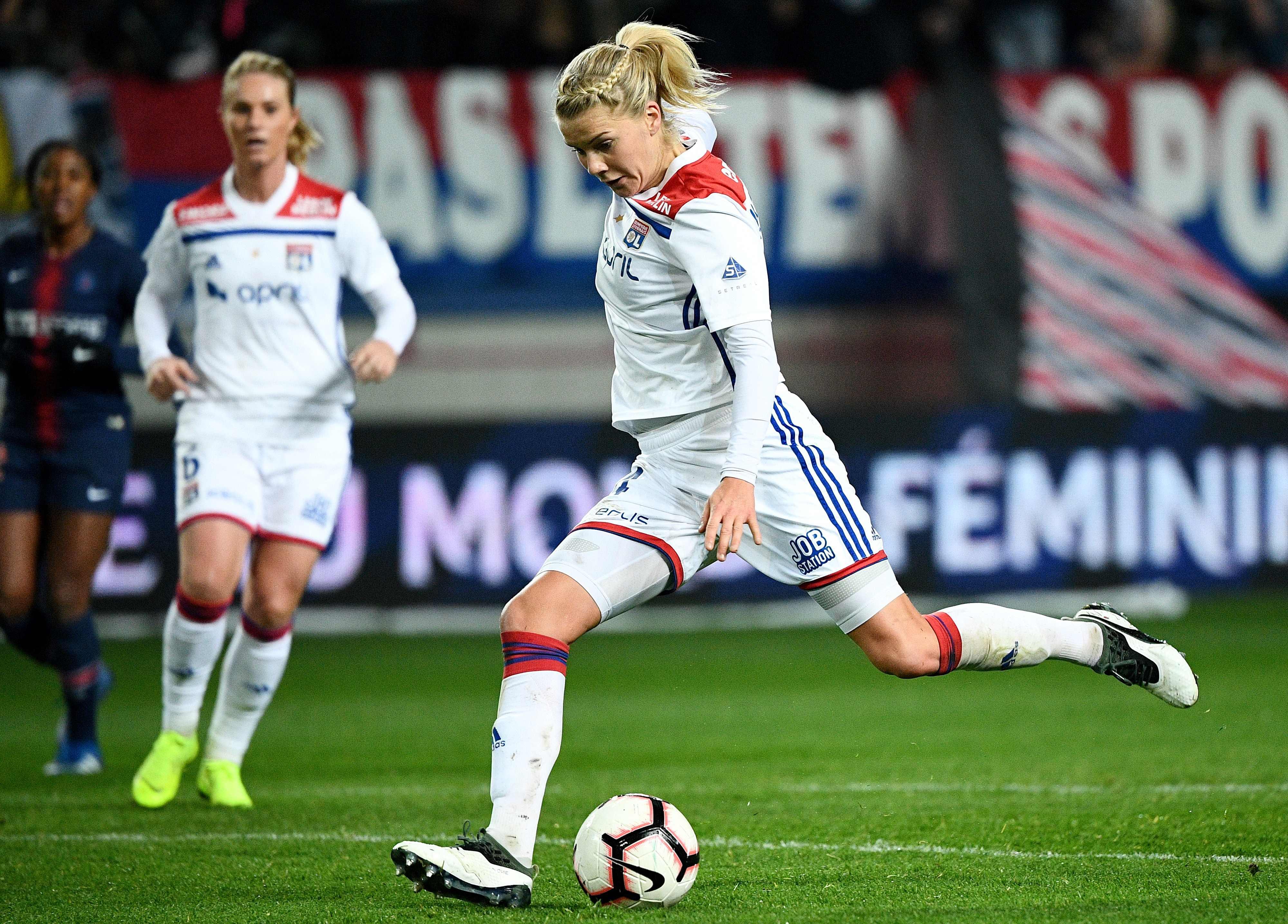 I said: “I know it’s difficult for you to see a young woman coming in to run a football club” and left it at that.

Stamping out sexism in sport has come a long way since then – but clearly not far enough.

SO that Christmas classic, Baby It’s Cold Outside is being banned on some US radio stations.

They claim the lyrics (a woman singing that she has to leave a man’s house as he tries to persuade her to stay) haven’t stood the test of time.

Banning the song is PC gone mad, as this song was written in an era when it was positively scandalous for a woman to be in a man’s house on her own.

I choose instead to focus on the fact that this song says more about the way we have moved on, and women can do what they damn well please.

What a shocking filler 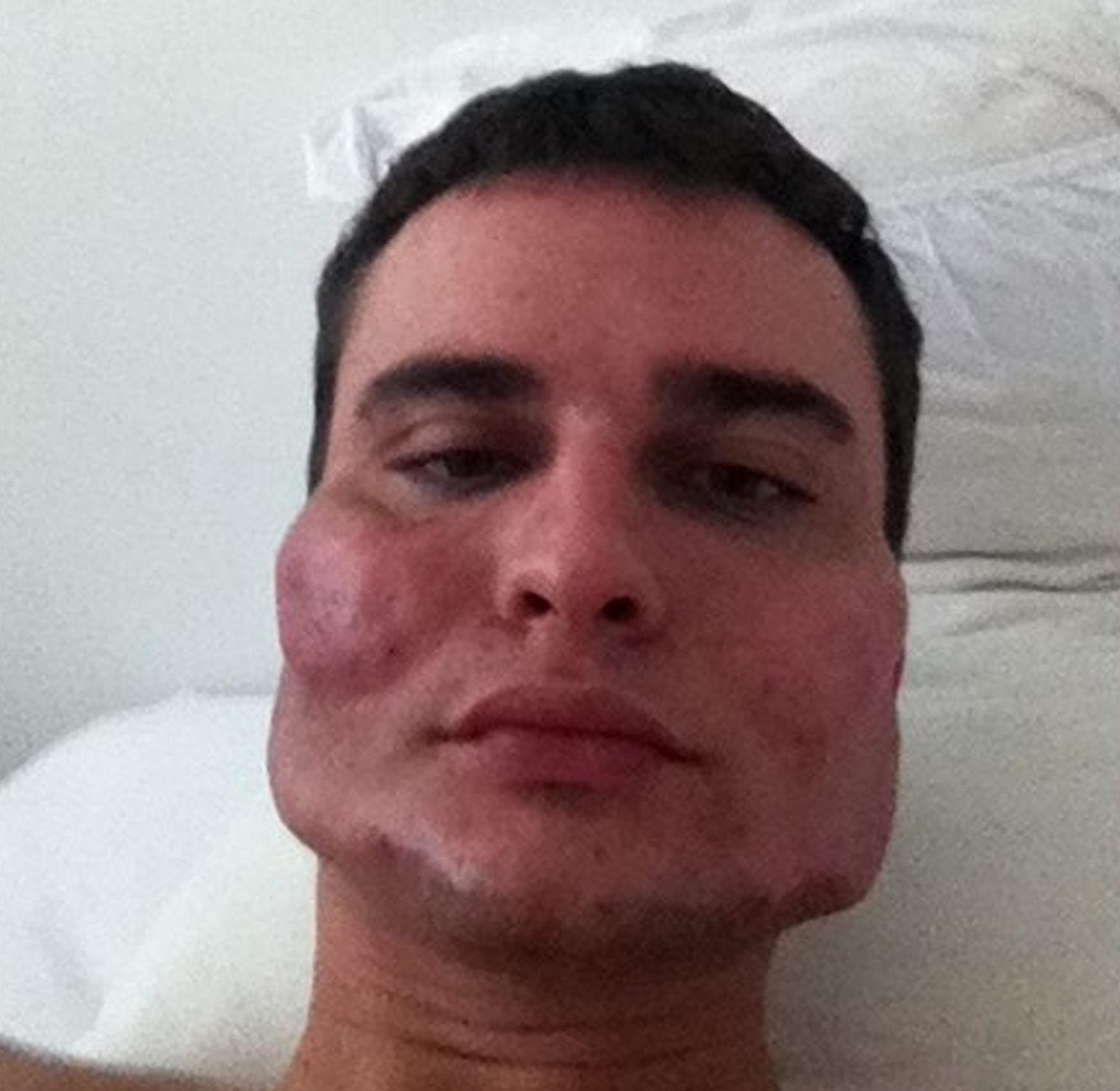 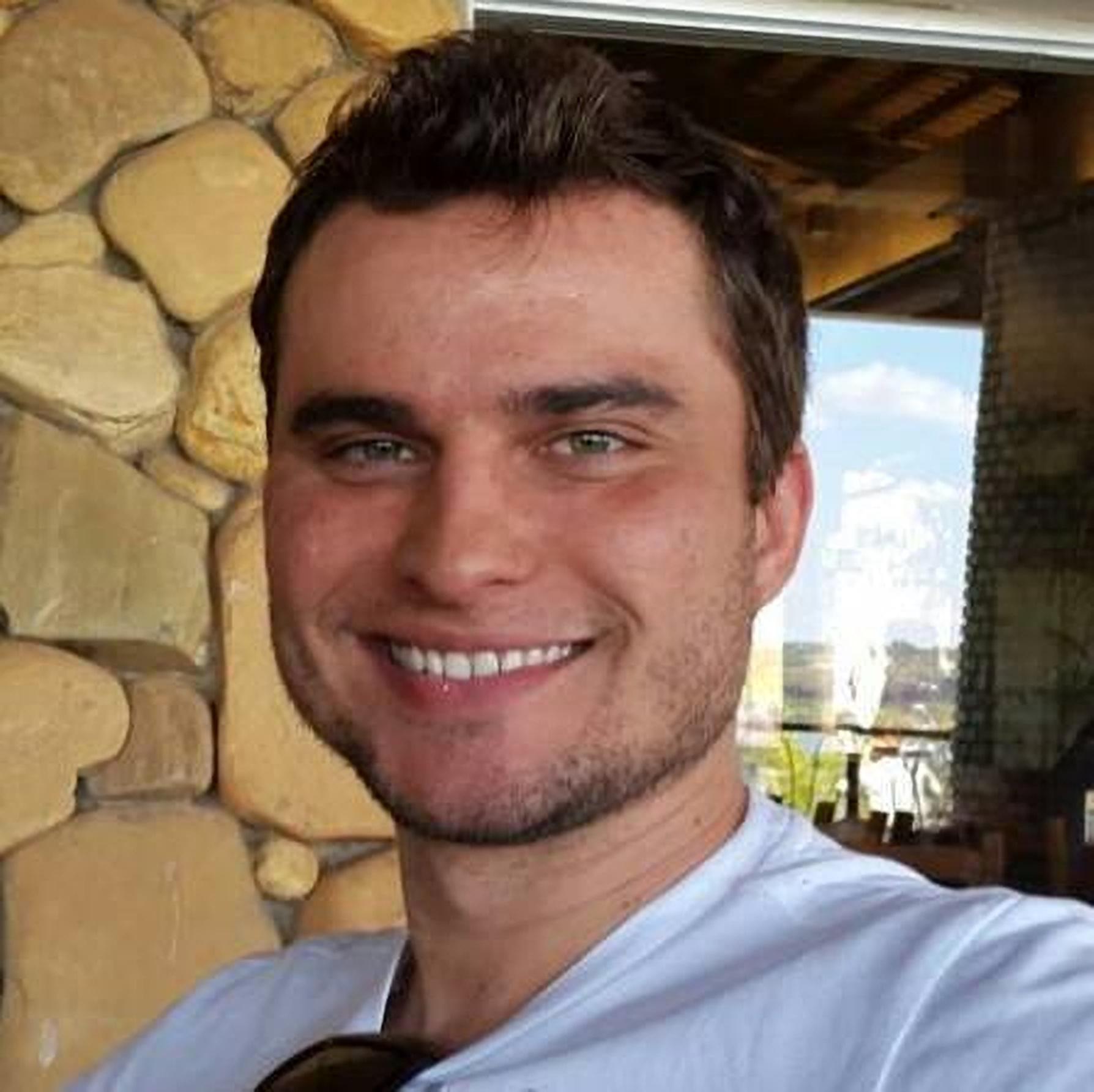 IF any of you are thinking about treating yourself to a little ­cosmetic “tweakment”, perhaps you will think twice now.

Check out these photos of a patient of a certain Dr Wesley Murakami, who is accused of injecting excessive and illegal amounts of Metacryl filler, the synthetic resin PMMA, into people’s faces – leaving them seriously disfigured for life.

The saddest thing is that all his patients looked great before they felt the need to look ­surgically “better”.

And the results are terrifying. This man is no doctor – he’s a butcher! 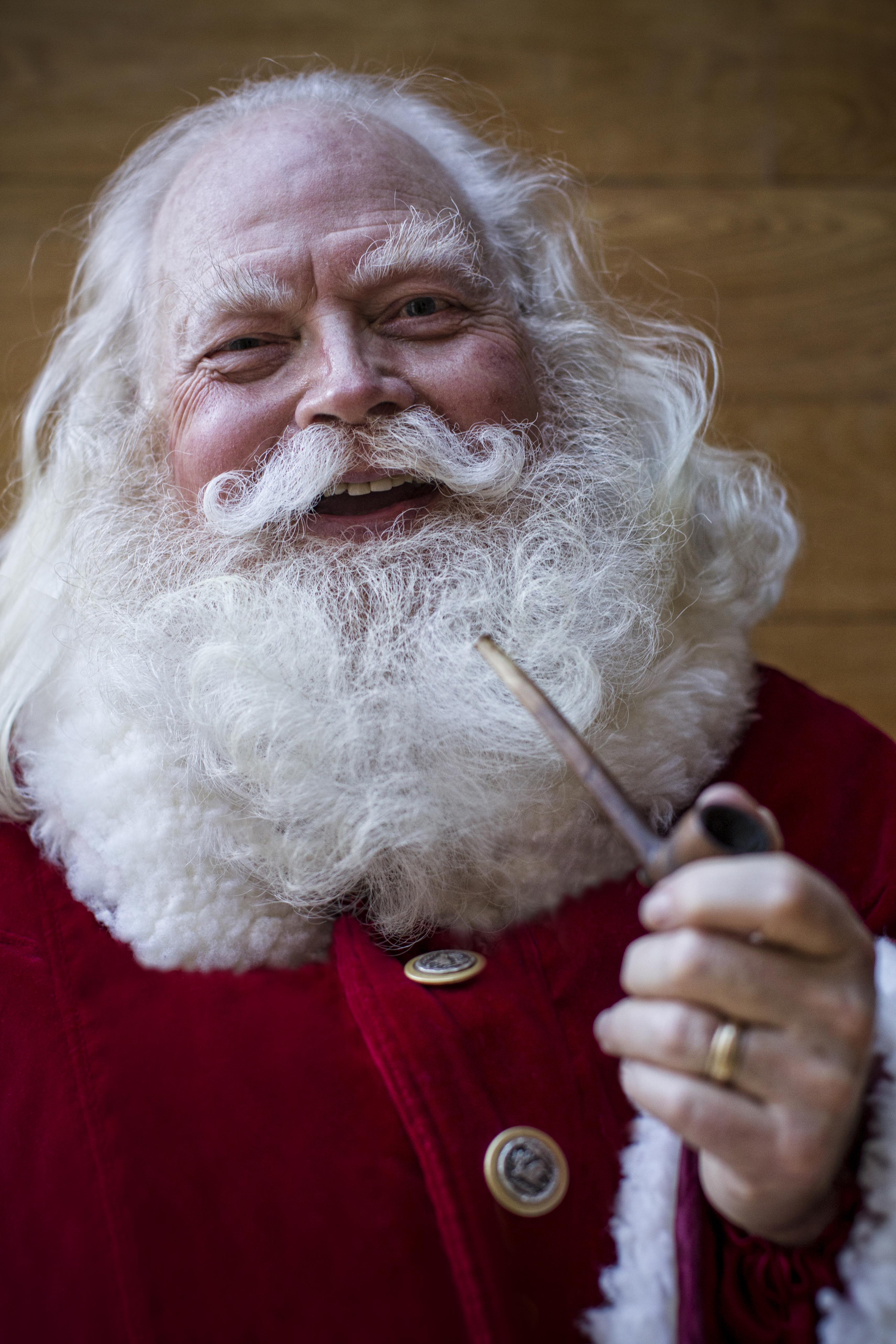 I’M all for being reminded of the true spirit of Christmas but maybe the Christian charity worker visiting a school in ­Spalding, Lincs, recently should have toned it down just a teensy bit?

Apparently, the children at Fleet Wood Lane school she was teaching – some as young as four – were left in tears after she told them: “Father Christmas isn’t real.”

She also made them smash up chocolate Santas to ­“hammer home the point”.

Children grow up so quickly, why shouldn’t the under-­sevens be able to believe in Santa? 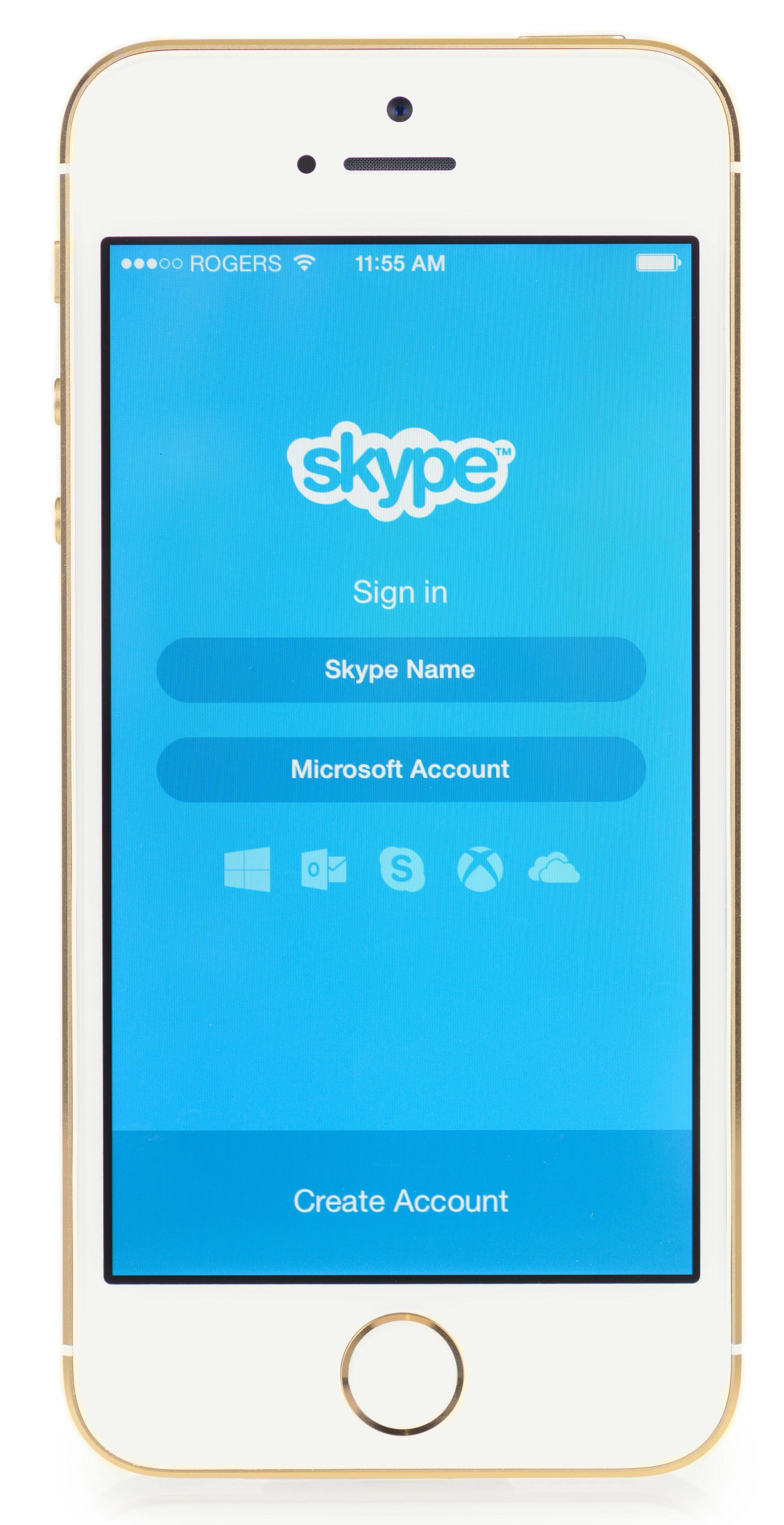 All kids find it out anyway so just keep quiet and let them enjoy the story.
What a horrible thing to do.

SMARTPHONES are the reason for stress and anxiety- related hospital admissions going up 37 per cent in the past decade, it has been claimed.

If it’s true, then maybe we should all dedicate one day a week to switching off entirely.

But also . . . is it any wonder the NHS is bust if people go to hospital with stress because of their phone  – rather than just turning it off?

God help us all!

Allow Ed to strut his stuff 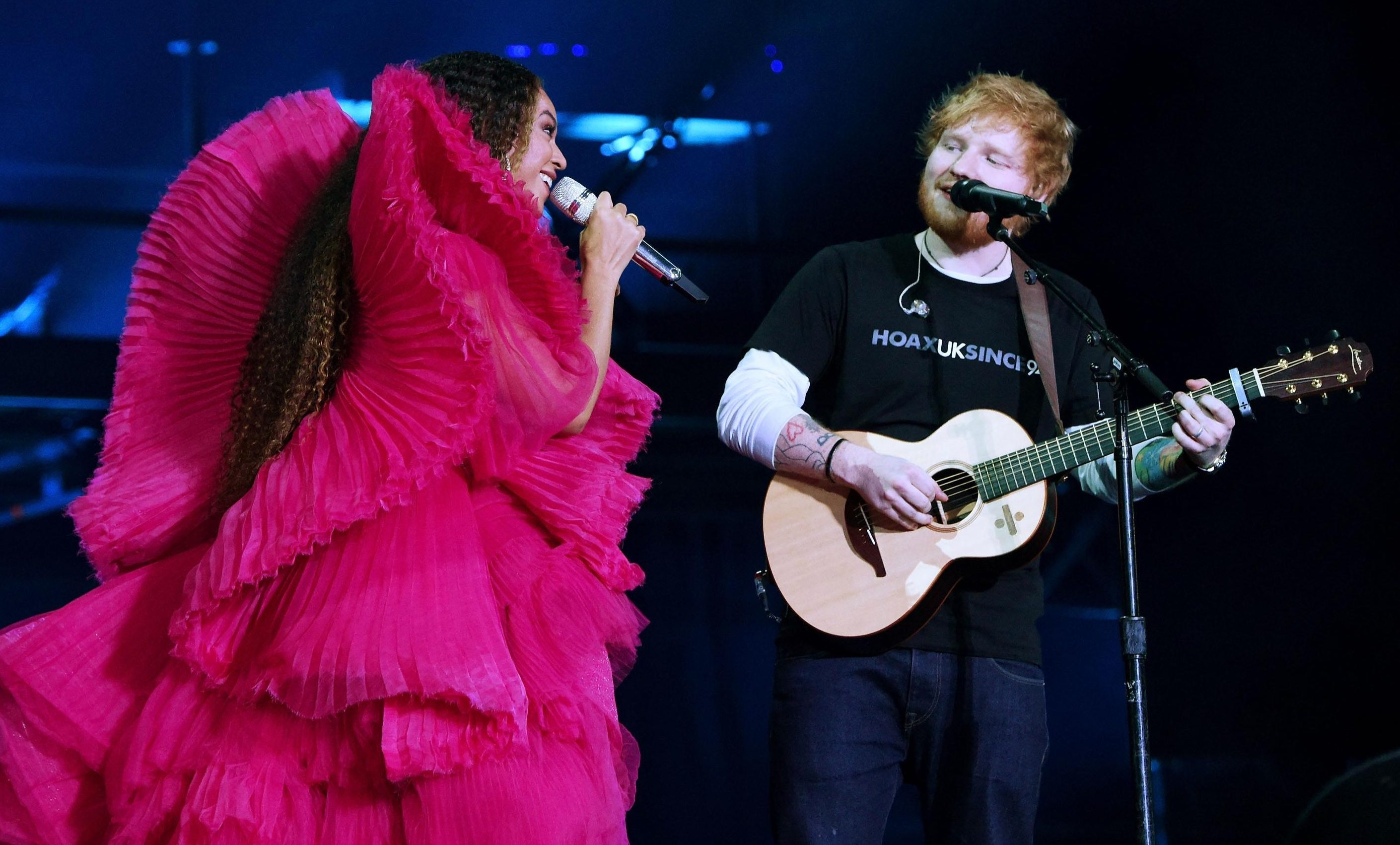 IT SEEMS a tad unfair that Ed Sheeran has been in the firing line this week.

He was accused of looking scruffy (in the same jeans and T-shirt that he always wears) when performing beside Beyonce,  who, to be fair, looked like she was wrapped in a theatre curtain.

So the man likes to dress down – is that a crime?

I much prefer being underdressed than overdressed.

I’ll take comfort over style any day of the week, so am firmly in Ed’s camp.