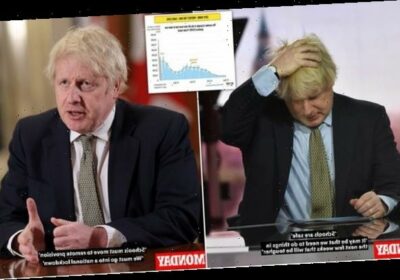 How Boris performed the mother of all U-turns: PM switched from claiming ‘schools are safe’ to CLOSING them in just 36 hours after he was confronted with alarming evidence of 80,000 UK Covid cases in a single day

The Government’s response to the coronavirus crisis has been repeatedly punctuated by damaging U-turns but last night’s decision by Boris Johnson to impose a national lockdown and close schools trumped them all.

The Prime Minister told the nation that the rapid spread of a new, more infectious variant of the disease meant he had no choice but to order people to stay at home.

But just 36 hours earlier Mr Johnson was encouraging parents to send their children back to classrooms this week and insisting tougher restrictions ‘may be’ required ‘in the next few weeks’.

Ultimately it was cold, hard statistics that prompted Mr Johnson to perform the dramatic volte-face. 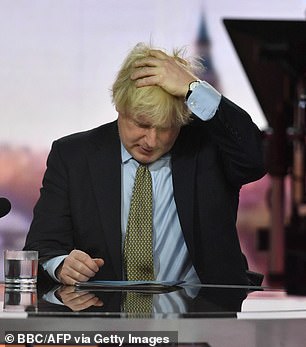 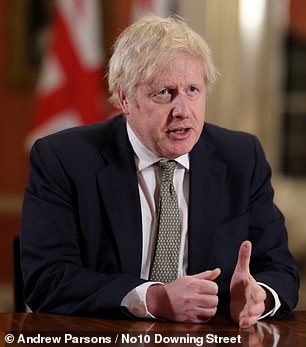 Boris Johnson told the Andrew Marr Show on Sunday (pictured left) that parents should send their children back to primary school this week. But the PM then announced yesterday evening (pictured right) that all schools across England will remain shut until the middle of February as he imposed another national lockdown 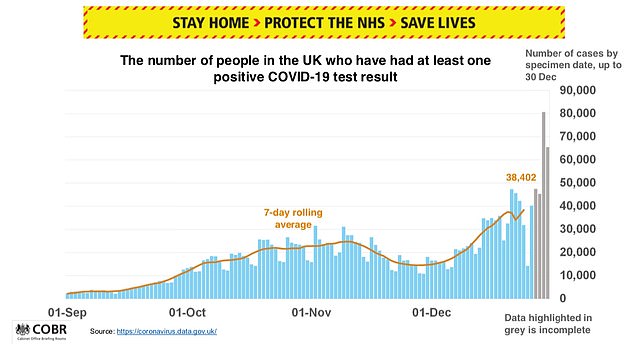 The Prime Minister’s screeching U-turn was prompted by new data which showed there were more than 80,000 positive tests for coronavirus on December 29 – a new record 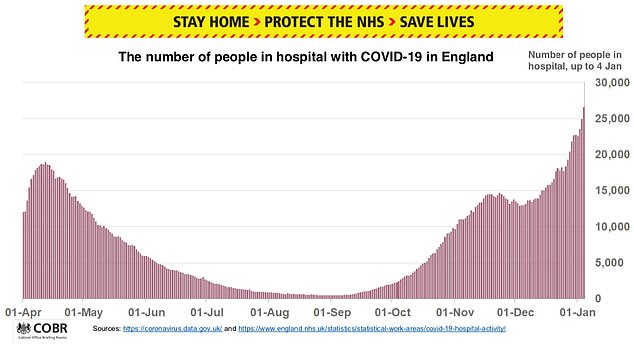 Meanwhile, the number of Covid patients in hospitals in England almost hit 27,000 on January 4, an increase of nearly one third in the space of just one week

December 15: The Government announced that every secondary school and college in England would be given access to rapid coronavirus tests from January.

December 17: Ministers announced that the return of secondary school and college pupils to the classroom in the New Year would be staggered in the first week of January.

December 22: The Scientific Advisory Group for Emergencies (SAGE) advised ministers that secondary schools should stay shut in January to slow the spread of coronavirus.

December 31: Gavin Williamson announced that the start of term would be pushed back to give schools more time to put in place mass testing facilities. A majority of pupils were due to return on January 18 instead of January 11. Primaries in hotspot areas were told they had to stay shut from January 4.

January 1: The Government said that all primary schools in London would remain shut but ministers urged schools elsewhere to reopen as planned.

January 3: Boris Johnson urged parents to send primary-age children back to school, insisting there is ‘no doubt’ schools are safe. The PM said education is a ‘priority’.

January 4: In the morning Department for Education officials were reportedly told that there were no plans to close schools or to cancel exams in the summer. Mr Johnson announced that schools were closing in his address to the nation at 8pm.

Mr Johnson’s top scientific experts yesterday presented him with data which showed the number of Covid-19 patients in hospitals in England had almost hit 27,000 on January 4.

That number represented an increase of nearly one third in the space of just seven days.

It was also 40 per cent higher than was recorded in the first peak back in April last year.

Meanwhile, the PM was also told that on December 29 more than 80,000 people tested positive for the disease across the UK – a new record.

The number of deaths had also increased by 20 per cent in a week and experts warned Mr Johnson that cases are rising rapidly in every part of the country.

Combined, the numbers painted such a grim picture that Mr Johnson moved immediately to impose another national lockdown, lasting until at least the middle of February.

Addressing the nation from 10 Downing Street at 8pm yesterday evening, the PM said: ‘With most of the country already under extreme measures, it is clear that we need to do more, together, to bring this new variant under control while our vaccines are rolled out.

‘In England, we must therefore go into a national lockdown which is tough enough to contain this variant.

‘That means the Government is once again instructing you to stay at home.’

On the issue of schools, the PM said: ‘Because we now have to do everything we possibly can to stop the spread of the disease, primary schools, secondary schools and colleges across England must move to remote provision from tomorrow, except for vulnerable children and the children of key workers.’

Whitehall insiders have stressed that the nature of the pandemic means that decisions are often taken in a hurry because of rapidly changing evidence and new expert advice.

But the pace and breadth of yesterday’s U-turn set a new high bar for Government chaos.

On Sunday morning Mr Johnson was encouraging parents to send their primary-age children back to school this week as he suggested new draconian curbs, while likely inevitable, would not be rolled out at least for the next few days.

Asked on the BBC’s Andrew Marr Show if parents of primary school children should send them back to the classroom, the PM replied ‘yes, absolutely’.

He added: ‘So I’d advise all parents thinking about what to do, look at where your area is: overwhelmingly you’ll be in a part of the country where primary schools tomorrow will be open.’

Mr Johnson said the Government had ‘really fought very hard throughout this pandemic across the country to keep schools open’ and insisted that ‘schools are safe’.

On the issue of whether restrictions would be increased, Mr Johnson said: ‘It may be that we need to do things in the next few weeks that will be tougher in many parts of the country. I’m fully, fully reconciled to that.’

Mr Johnson also repeated what has become the Government’s mantra in recent weeks as he said all measures would be kept ‘under constant review’. 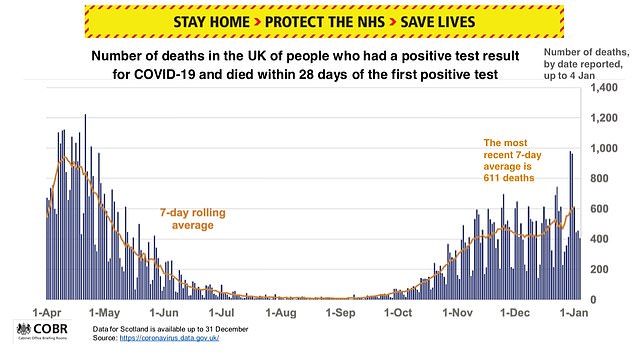 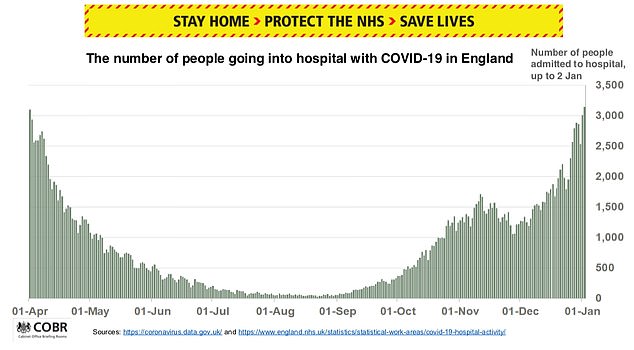 Number 10 aides went to bed on Sunday night believing that the PM could move more tier 3 areas into tier 4 this week as the next step in the Government’s coronavirus response.

A new national lockdown being imminent did not seem to be on the cards.

However, Mr Johnson signalled a potentially hardening of his stance yesterday morning.

Speaking during a visit to Chase Farm Hospital in north London to meet some of the first people to receive the Oxford vaccine, Mr Johnson said there were ‘tough tough’ weeks to come.

He added: ‘If you look at the numbers there’s no question we will have to take tougher measures and we will be announcing those in due course.’

However, he still appeared to be of the view that schools across England should remain open wherever possible.

‘The reasons for wanting to keep schools open I think are very, very powerful.’

The new data presented to Mr Johnson prompted a rethink of his strategy, with Number 10 deciding by yesterday afternoon that the PM would address the nation in the evening to announce a new lockdown.

The PM’s Covid ‘S’ Cabinet sub-committee signed off on the plans late in the afternoon before they were then presented to the wider Cabinet.

The decision to keep schools shut came after a rumbling Cabinet split on the issue.

Mr Johnson had originally backed Education Secretary Gavin Williamson who argued for a staggered return to the classroom this month.

But Michael Gove, the Minister for the Cabinet Office, and Matt Hancock, the Health Secretary, were said to have been pushing for schools to close because of fears over the spread of the virus, according to the Financial Times.

The data presented to Mr Johnson yesterday prompted him to ditch Mr Williamson’s plans as the premier decided all schools must close and exams in their current form will have to be cancelled.

One Cabinet source conceded there had been tensions over the schools decision and the position shifted late, but insisted the public understood that the situation was changing fast.

‘You try to keep everything open until the pressure on NHS is just too much and you have to protect people,’ the source told MailOnline.

‘There are just no easy decisions available.’