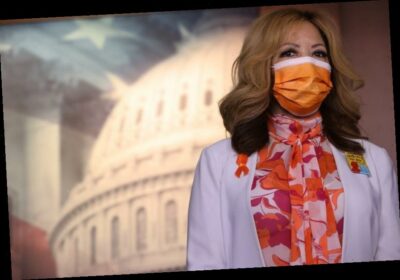 Since losing her son in 2012 to an act of gun violence, Rep. Lucy McBath (D-GA), has weathered incalculable grief. Jordan Davis was just 17-years-old when a man complaining of “loud music” opened fire on a car of unarmed teens at a gas station in Jacksonville, Florida.

Since that time, McBath has been a tireless activist for gun law reform, running for Congress to turn her pain into a push for solutions. Last week (March 11), she joined fellow members of the House of Representatives in helping to pass two key gun violence bills that have bipartisan support.

One bill is H.R. 8, the Bipartisan Background Checks Act. It addresses current loopholes that allow firearms to be sold at gun shows, online, or person-to-person without a background check. McBath, Rep. Sheila Jackson Lee (D-TX) and Rep. Robin Kelly (D-IL) are among the members of the Congressional Black Caucus who introduced the bill, which requires a background check for every gun sale or transfer.

“With this legislation, we empower law enforcement to keep guns from those who might do harm by simply requiring a background check whenever a gun is sold,” said McBath, vice chair of the Gun Violence Prevention Task Force. “This is common-sense legislation that will prevent more families from knowing the pain of losing a loved one to gun violence.”

The background check bill has been endorsed by such advocates as Everytown for Gun Safety Action Fund and its grassroots networks, Moms Demand Action and Students Demand Action.

“This weekend alone, 31 people have been shot in Chicago and four people tragically died,” said Rep Kelly in a tweet. “I am thinking of those hurt this weekend and their families. I will continue working and doing everything I can do end this terrible epidemic.”

Currently, individuals can purchase a firearm just three days after a background check begins, even if it has not been completed. This bill extends the review period to 10 days to help ensure that gun sellers are not putting guns in the hands of people who should not have them.

The measure is known as the “Charleston Loophole” bill, referencing the 2015 mass shooting at “Mother Emanuel” AME church in Charleston, South Carolina. A gunman with a history of embracing white supremacy killed nine Black congregants as they welcomed him during Bible study. It was later revealed that flaws in the background check system allowed him to obtain the weapon ultimately used in the hate crime.

“I am emotional today for the families and friends of the Emanuel Nine, several of who were my constituents,” said Clyburn in a statement. “They have been waiting for years to see the ‘Charleston loophole’ closed. [This] vote moves us one step closer to making gun ownership safer.”

America is dealing with an epidemic of gun violence that has touched nearly every aspect of society—from schools and churches to movie theaters and nightclubs. Every day, more than 100 people in the United States are killed with guns and 200 more are shot and wounded. The gun homicide rate in the U.S. is 25 times higher than that of other developed countries. Data and research shows that common-sense public safety laws can reduce gun violence and save lives.

Clyburn noted that the passage of these two landmark pieces of legislation “responds to the concerns of more than 90 percent of the American people, including many gun owners, who support background checks before the sale of firearms.”

“These important background check bills garnered bipartisan support in the House, and I hope the Senate will follow our lead and send these lifesaving bills to President Biden’s desk to be signed into law,” he said.

McBath agreed. “Our vote is a beginning and not an end,” she said. “We call on our colleagues in the Senate to do what is right to keep Americans safe. The lives of our loved ones are on the line.”