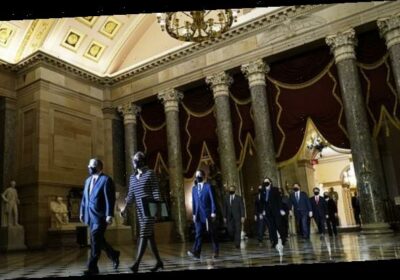 House Democrats walked across the Capitol Monday evening to hand-deliver an article of impeachment to the Senate charging President Donald Trump with ‘incitement of insurrection’ – formally beginning his second impeachment trial.

With solemn expressions on their faces, the House impeachment managers made the journey less than three weeks after a MAGA riot ransacked the Capitol during the electoral count after Trump told supporters to ‘fight.’

In an event carried live on cable news, the managers crossed Statuary Hall and the Capitol Rotunda – some of the same spaces that were invaded by the mob, members of which smashed windows and shouted out threats to former Vice President Mike Pence and House Speaker Nancy Pelosi.

House Clerk Cheryl Johnson led the nine House managers to the Senate, where Trump’s second impeachment trial will be held. Johnson and all of the managers wore dark masks for the walk.

It was history repeating itself – with a COVID twist: On January 15 2020, nine Democrats had walked the articles of impeachment for his first trial to the Senate. It ended in his acquittal.

As in Trump’s first impeachment, cameras were allowed on the second floor of the Capitol to capture the occasion.

The formal transmittal of the articles does not establish the procedures for the trial such as whether witnesses will be allowed and how long it will go. That is still to be negotiated by senators.

The House members waited outside the south door of the Senate – steps away from where a group or rioters were detained during the riots.

In the chair when they arrived was Sen. Patrick Leahy of Vermont, who will preside over the trial. He is the president pro tempore of the Senate. 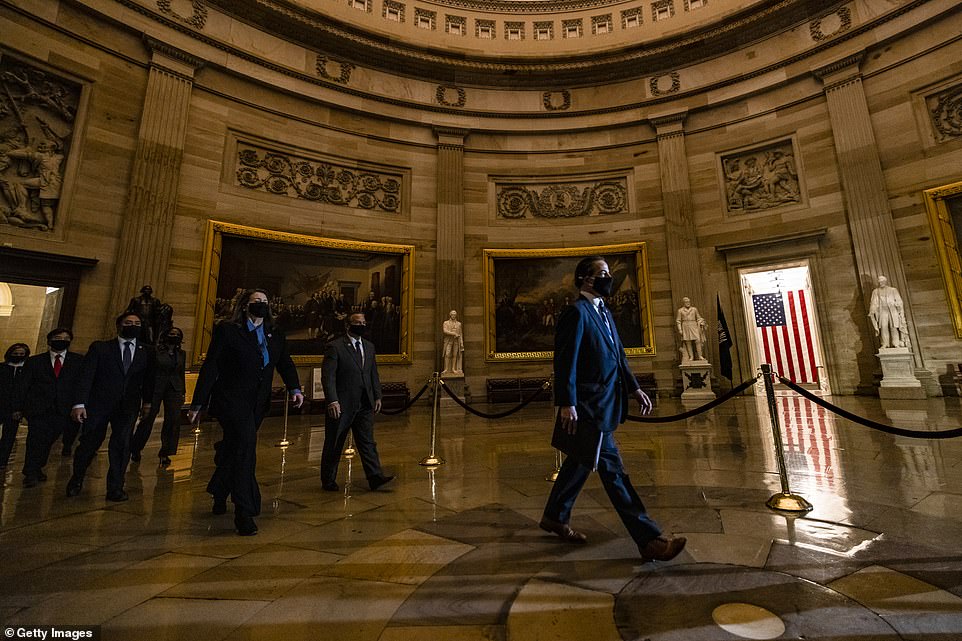 Leading the charge: Jamie Raskin, the Democrats’ lead impeachment manager, is first in line of the nine who will prosecute the case against Donald Trump 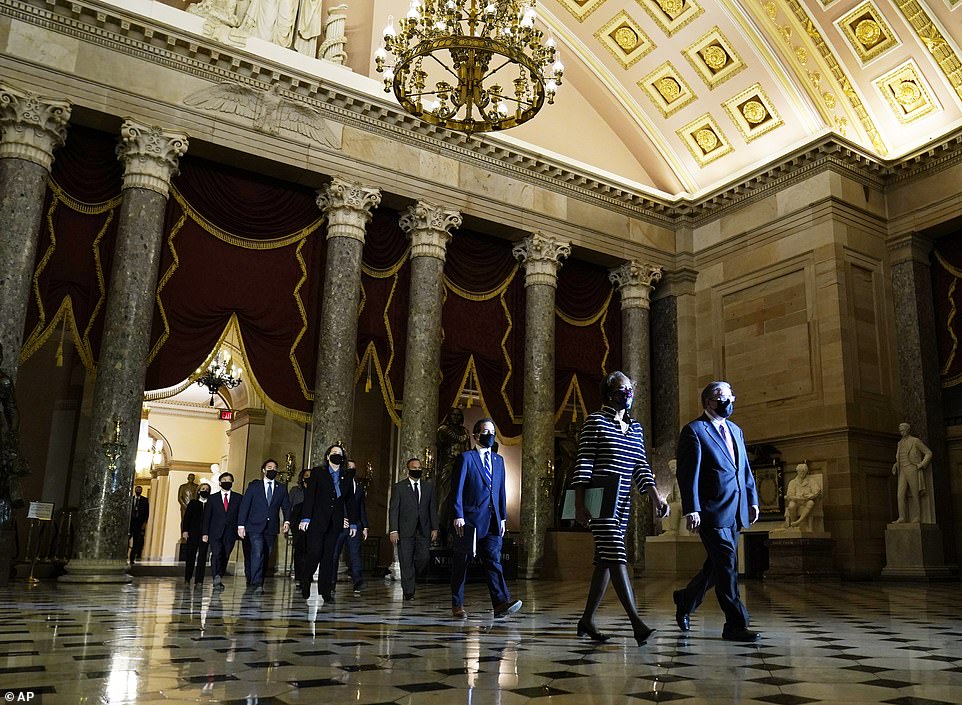 Article on its way: Clerk of the House Cheryl Johnson along with acting House Sergeant-at-Arms Tim Blodgett, lead the Democratic House impeachment managers as they walk through Statuary Hall on the way to the Senate 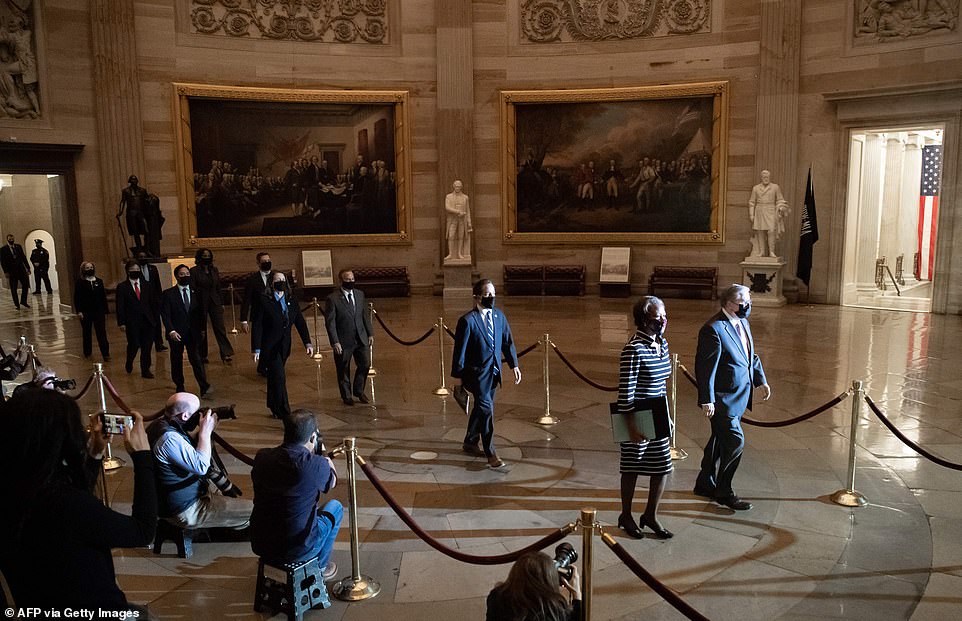 Here they go: The House impeachment managers make their way through Statuary Hall towards the Senate 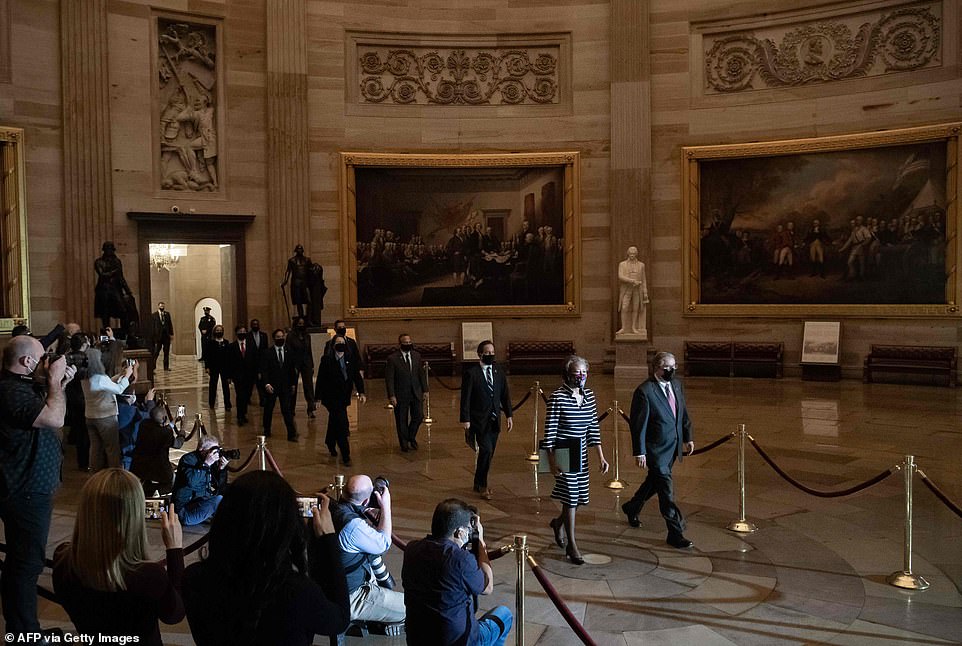 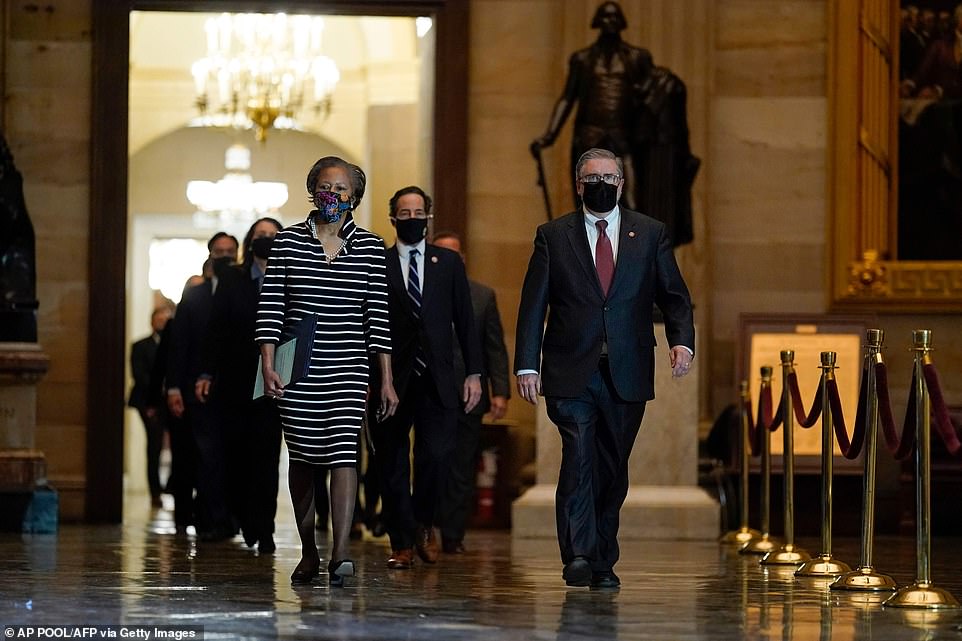 Crime scene: Clerk of the House Cheryl Johnson along with House Sergeant-at-Arms Tim Blodgett lead the Democratic House impeachment managers as they walk through Statuary Hall. It is less than three weeks since MAGA rioters stormed into the Capitol 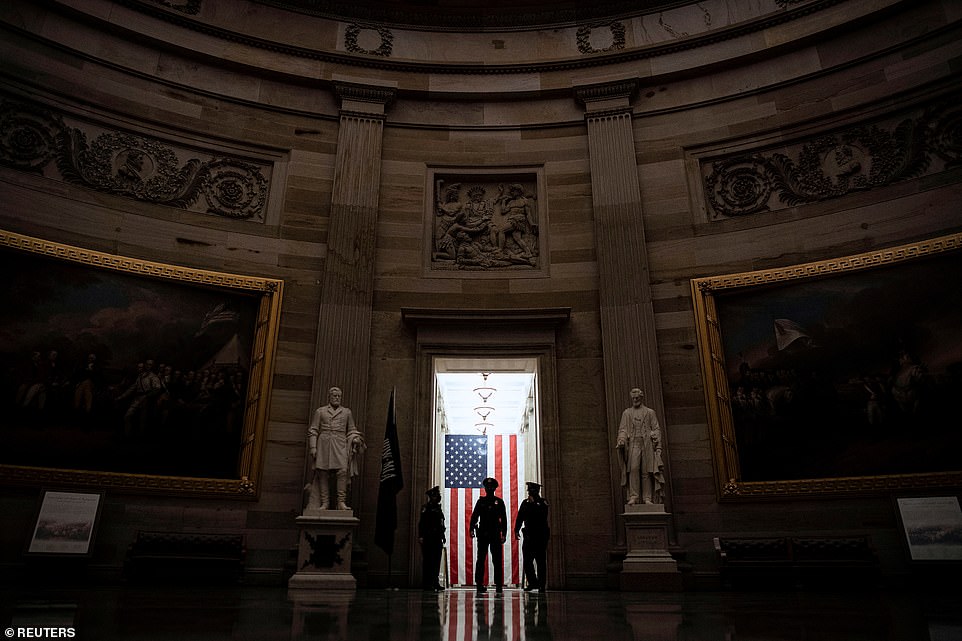 Grand setting: The Rotunda of the Capitol under heavy security ahead of the walking of the article of impeachment 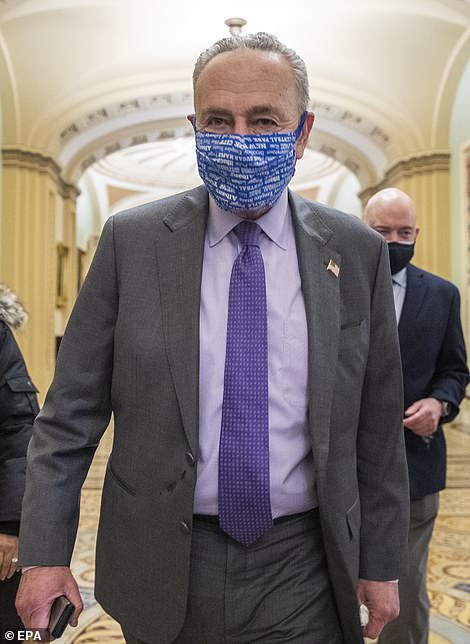 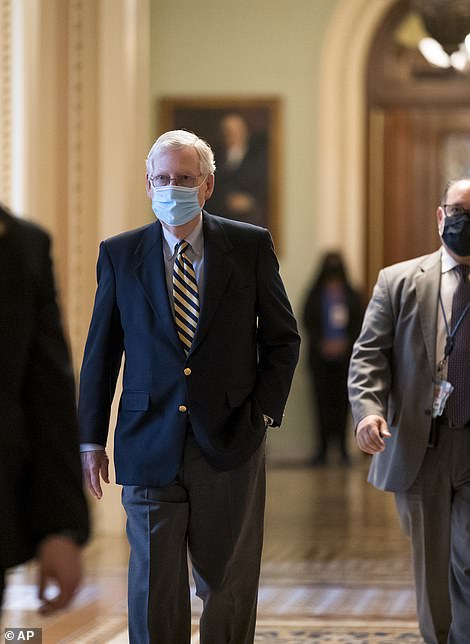 Key moment: House majority leader Chuck Schumer and minority leader Mitch McConnell have still to strike a power-sharing deal but have done a deal on the timing of the impeachment trial

In the chair when they arrived was Sen. Patrick Leahy of Vermont, who will preside over the trial. He is the president pro tempore of the Senate.

Raskin then read the impeachment article in its entirety that Trump ‘is impeached for high crimes and misdemeanors.’

It states that Trump engaged in high crimes and misdemeanors ‘by inciting against the government of the United States’ on the day of the electoral vote count.

He cited Trump’s repeated claim that the election included ‘widespread fraud’ and that ‘we won,’ as well as Trump’s call at a January 6 rally for his supporters to ‘fight like hell.’

It then recalls ‘violent, deadly, destructive and seditious acts’ of the mob and says Trump endangered the security of the nation and interfered with the peaceful transition of power, and ‘betrayed his trust as president.’

When he was done, Raskin asked for leave to withdraw from the Senate. Leahy said the Senate was now ready to proceed with the trial, and the managers left.

Thus ended Monday’s formal action, with senators set to be sworn in Tuesday afternoon to form the court of impeachment.

There were numerous Democrats, and multiple empty chairs in the Senate when the action went down – in a chamber that is frequently mostly empty. Also there was Minority Leader Mitch McConnell of Kentucky and Mitt Romney of Utah.

Romney was the only senator to vote to convict Trump of an article in January. Also present was new Kansas Republican Sen. Roger Marshall, who has called the post-presidency impeachment ‘unconstitutional.’

The moves set up an impeachment trial to begin within weeks,  with the Senate Republican conference already split  – and GOP Sen. Rob Portman announcing his retirement Monday morning.

There is expected one marked change from Trump’s first impeachment: Chief Justice John Roberts will not be in the chair for the trial.

The Constitution establishes that ‘when the President of the United States is tried the Chief Justice shall preside.’

But it makes no specific mention of a former president. Roberts was reportedly anxious to avoid presiding over a second Trump impeachment: a role that would test his efforts to remain nonpartisan, while once again soaking up part of his workday.

At one point there had been speculation it would be Kamala Harris presiding, because of the vice president’s constitutional position as Senate president.

It was not immediately clear how having a senior Democrat presiding might affect the tenor of the proceedings. 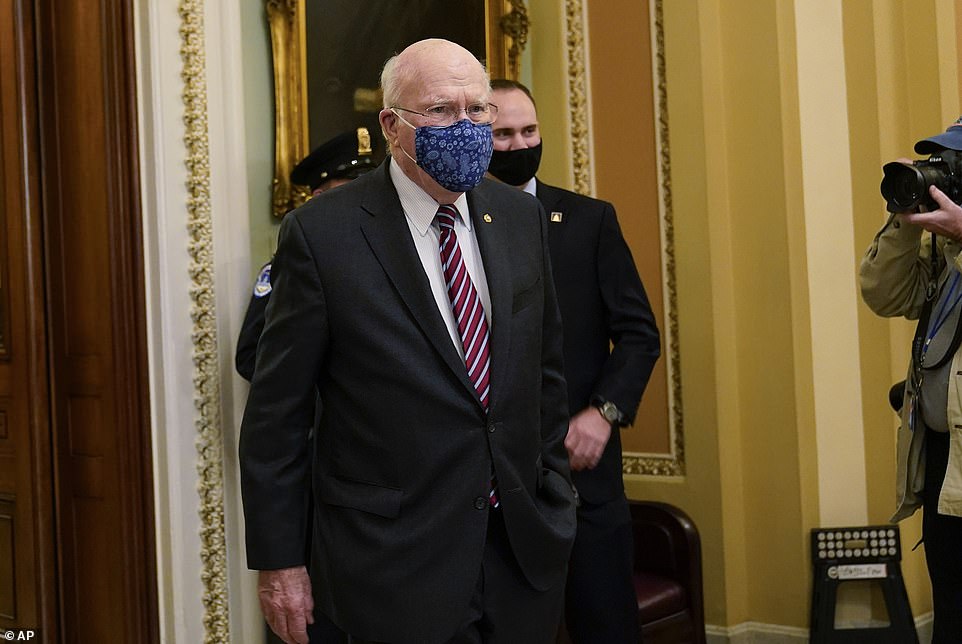 Most likely to preside: Patrick Leahy, the Vermont Democrat who is president pro-tempore is set to take charge 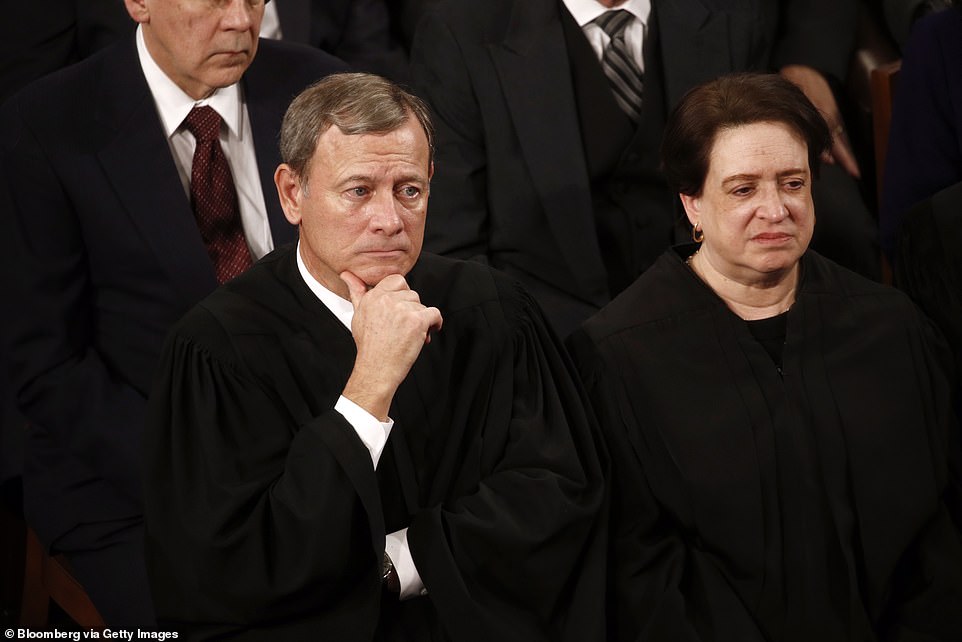 Supreme Court Justice John Roberts is not expected to preside over the historic second impeachment of Donald Trump, following reports he didn’t want the duty

80-year-old Leahy, the Vermont Democratic senator since January 1975, is the longest-serving – although not oldest – member of the Senate.

He is broadly seen as a liberal, having been a critic of the Iraq war, staking out strong advocacy for same-sex marriage and is a long-time critic of government surveillance powers.

Well-liked by colleagues of both parties, he has a long track record of bipartisan bills but presiding over a divisive inauguration may test a reputation for bonhomie.

But even that was tested in 2004, when the Senate class photo was presided over by then Vice President Dick Cheney.

Needled by his criticism over Iraq he turned to Leahy and said: ‘Go f*** yourself, Leahy.’

Married since 1962 and a father of two, he is a devout Catholic who attends the same church which Joe Biden went to on Sunday, Holy Trinity in Georgetown.

A Leahy spokesman said the two Senate leaders were negotiating ‘all process issues’ regarding the trial and that Leahy would defer to them.

Neither side volunteered why Harris was not chosen to preside, but she would have wanted to avoid entirely the spectacle of the Senate trial defining the start of her time as vice president.

And Democrats would have been hit by worse accusations of partisanship with Harris presiding than Leahy.

But the Republican caucus was also hit by drama Monday with Portman saying he would not run.

Portman has called the MAGA riot ‘an attack on democracy itself’ and said days afterward that Trump ‘bears some responsibility’ for what happened.

He is a two-term senator who was previously a House member and U.S. Trade Representative under the George W. Bush White House.

His retirement sets off a key open-seat Senate race in a hotly contested state, as Republicans sort through whether to continue to embrace or reject Trump amid the intra-party clash over impeachment.

Transmitting the impeachment article – an act undertaken by managers selected by Speaker Nancy Pelosi at a time she revealed to Senate on Friday – sets in motion procedures under the rules of the Senate for Trump’s trial.

Only broad outlines of the time-frame are known, but it is now a certainty that the trial will go forward, with the trial itself set to begin in about two weeks.

The Senate is expected to receive the article around 7 pm tonight, after the managers physically bring a document charging Donald Trump with ‘incitement of insurrection.’

On Tuesday, senators will be sworn in to hear the trial. The trial itself will begin on Feb. 9, under an agreement reached Friday between Senate Majority Leader Charles Schumer and Minority Leader Mitch McConnell, although many details of how it will go have yet to be worked out.

It was still not clear who would preside over the trial and whether it will be Chief Justice John Roberts.

The trial will advance even as Senate Republicans have been expressing opposition to the impeachment – even after some of them denounced Trump in the immediate hours after a MAGA mob trashed the Capitol after attending a ‘Stop the Steal’ rally where Trump urged them to ‘fight.’

Among the most emphatic is Florida Sen. Marco Rubio (R-Fla.), who is up for reelection in Trump’s new home state. ‘I think the trial is stupid, I think it’s counterproductive. The first chance I get to vote to end this trial, I’ll do it.’

He also said it was ‘arrogant’ for the Senate to vote to bar Trump from holding future office – in a procedure laid out in the Constitution.

‘I think that’s an arrogant statement for anyone to make. Voters get to decide that. Who are we to tell voters who they can vote for in the future,’ Rubio told ‘Fox News Sunday.’

But Rubio also said Trump ‘bears responsibility for some of what happened’ when a mob of MAGA supporters ransacked the Capitol during the counting of the electoral votes of Joe Biden’s election victory.

Sen. Tom Cotton (R-Ark.), who opposed an effort to overturn the election during the Electoral Vote count January 6, says he doesn’t think the Senate has the authority under the Constitution to convict an ex-president.

‘The more I talk to other Republican senators, the more they’re beginning to line up’ in agreement, he said, of a conference that stood by Trump throughout his presidency.

‘I think a lot of Americans are going to think it’s strange that the Senate is spending its time trying to convict and remove from office a man who left office a week ago,’ he said.

The GOP senators move toward Trump comes even amid a bombshell New York Times report that a top Justice Department official met with the president in his final weeks in office about an effort to announce a federal investigation into the Georgia election results – and a plan for Trump to fire the acting attorney general after he wouldn’t go along with a probe into baseless allegations of election fraud. Trump reportedly backed down only after a team of top DOJ officials threatened to quit if he went ahead with the plan.

A group of legal scholars have pointed to past impeachments for lower offices even after the occupants had resigned or left office.

Utah Sen. Mitt Romney, who voted for an impeachment article against Trump in January, is among a handle of Republican senators most likely to vote to convict.

‘I believe that what is being alleged and what we saw, which is incitement to insurrection, is an impeachable offense. If not, what is?’ he said.

The two-week pause negotiated by leaders allows for both sides to draft legal briefs.

READ THE FULL ARTICLE OF IMPEACHMENT 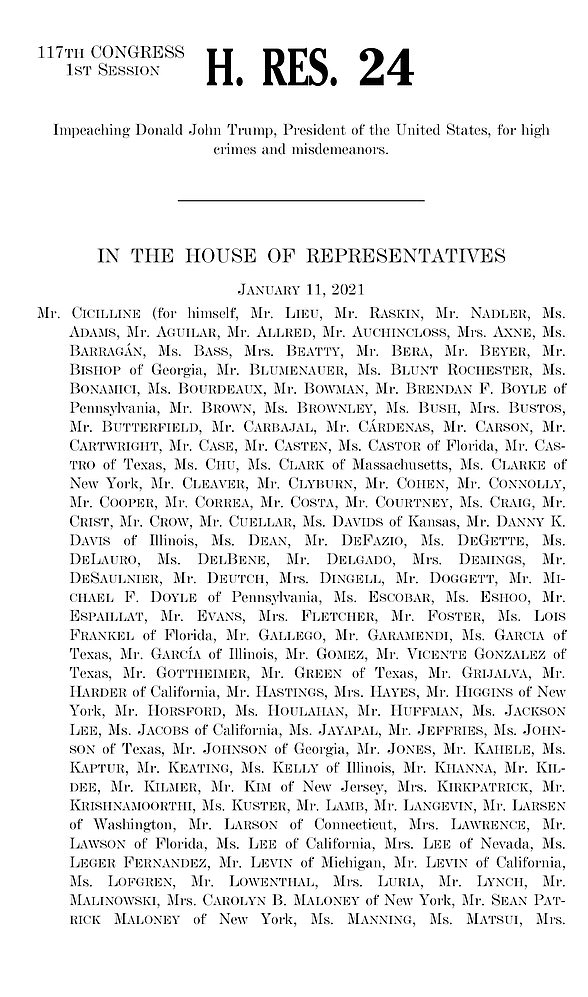 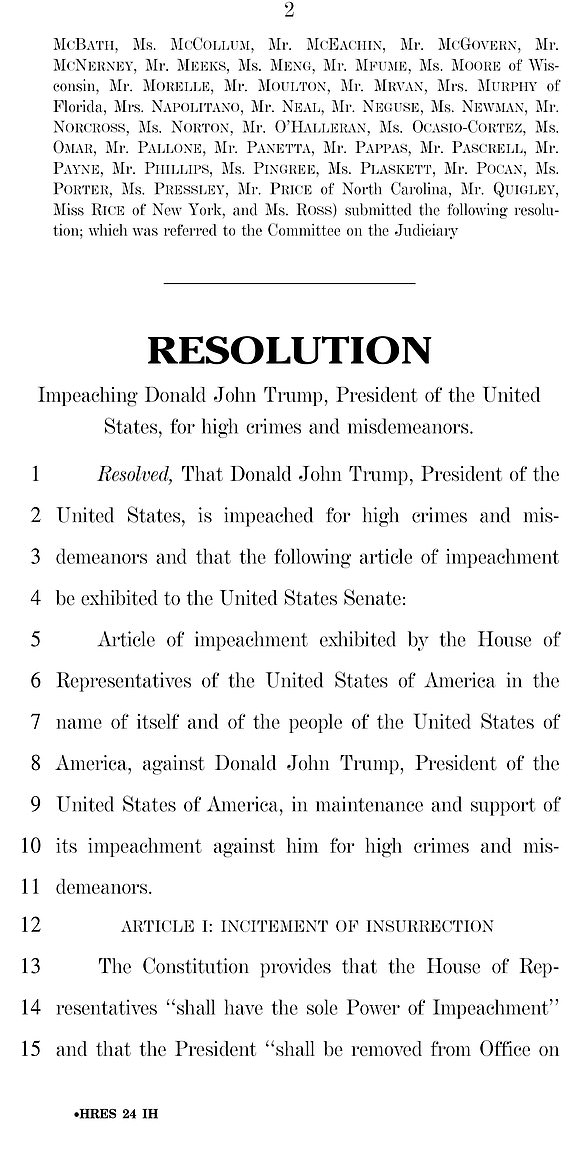 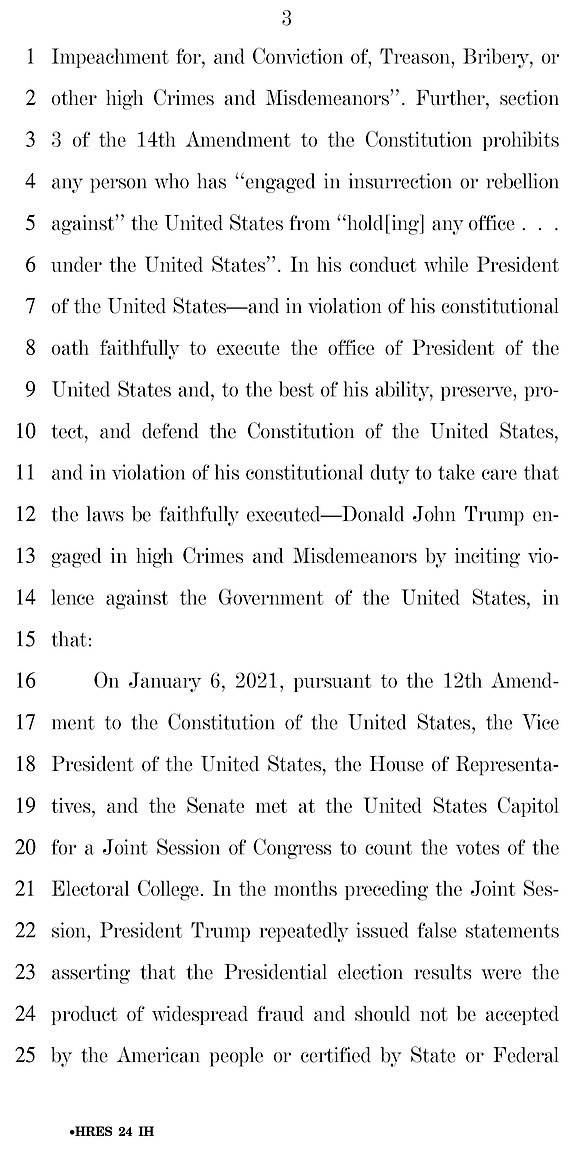 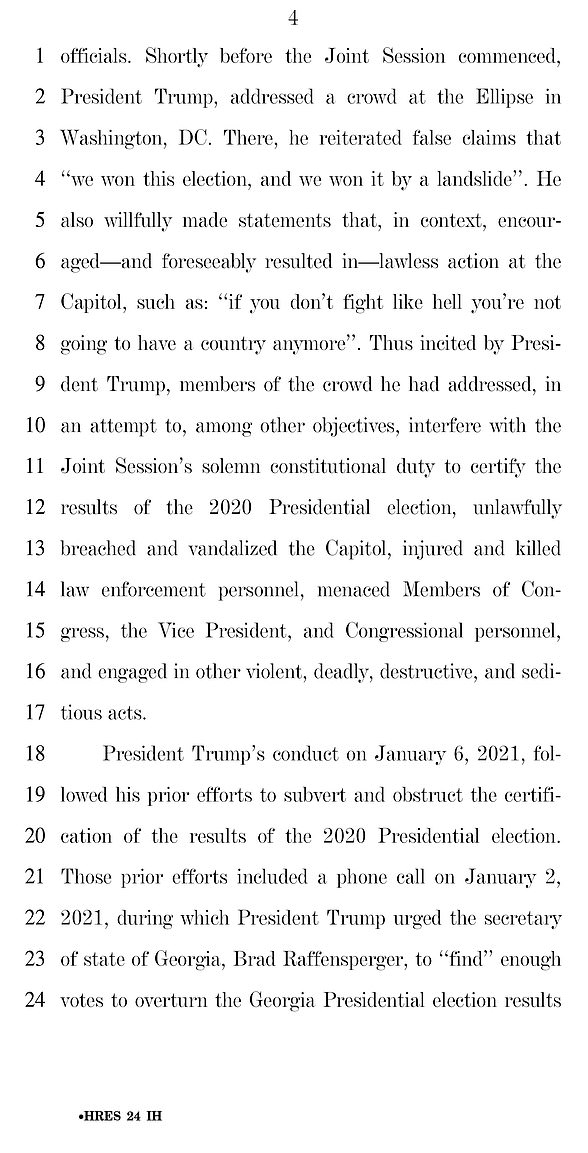 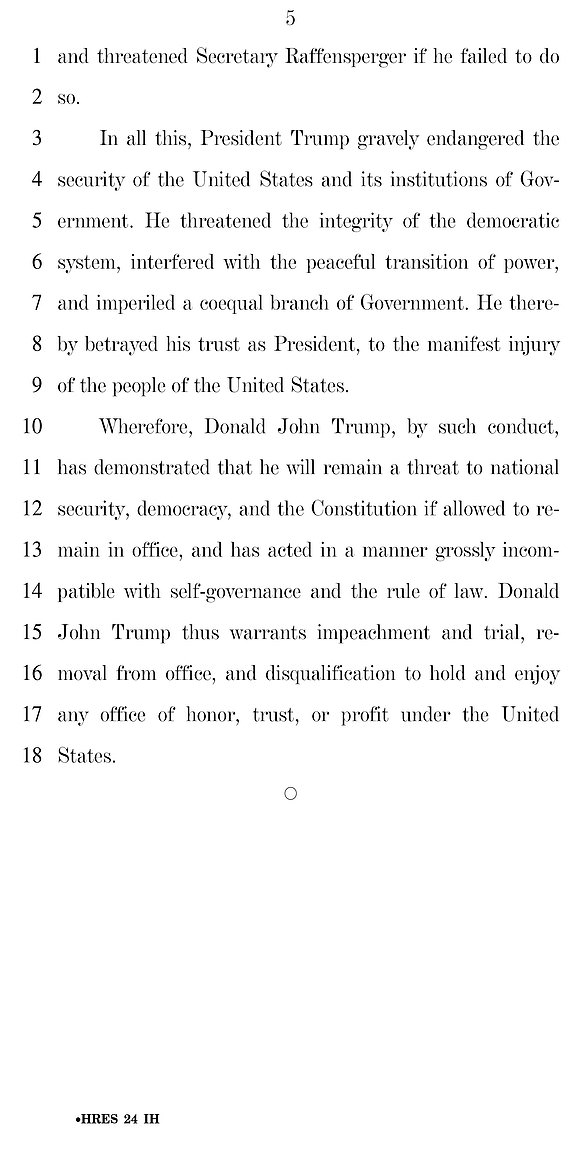