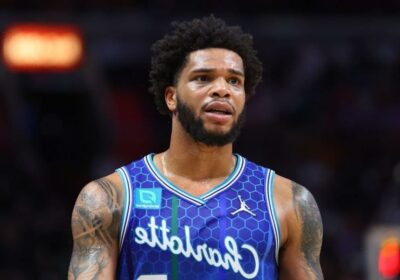 Charlotte Hornets player Miles Bridges pled not guilty to three federal charges at his recent arraignment on July 20, the Charlotte Observer reports. Bridges is charged with two felony counts of child abuse under circumstances or conditions likely to cause great bodily injury or death and one count for injuring the parent of a child .

These charges follow a June 29 arrest in Los Angeles after his girlfriend accused him of assaulting her in the presence of the two children they share together. Bridges was subsequently released on a $130,000 bail bond.

Mychelle Johnson, the mother of two children by Bridges, took to social media with her claims in a now-deleted post: “I hate that it has come to this, but I can’t be silent anymore. I’ve allowed someone to destroy my home, abuse me in every way possible and traumatize our kids for life. I have nothing to prove to the world, but I won’t allow anyone who could do something so horrible to have no remorse and paint a picture of something I’m not.”

She also shared pictures of her injuries, which “show a swollen lip and nose, discolored hands, a swollen wrist, bruises on her ear, arm, back and cuts on her leg,” accompanied by a copy of her medical report, which read that she was suffering from “assault by strangulation; brain concussion; closed fracture of nasal bone; contusion of rib; multiple bruises; strain of neck muscle” and was an “adult victim of physical abuse by male partner.”

George Gascon, District Attorney for Los Angeles, said “Children who witness family violence are especially vulnerable, and the impact on them is immeasurable…Mr. Bridges will be held accountable for his actions, and our Bureau of Victim Services will support the survivors through this difficult process.”

As a restricted free agent and coming off a stellar season, it was anticipated that Bridges would “command big money in the free agent market this summer;” however, these charges could derail this. Both the NBA and Hornets organization are aware of these charges.

When Bridges’ arrest made headlines, the team issued a statement, “The Charlotte Hornets are aware of the situation involving Miles Bridges. We are in the process of gathering additional information. We have no further comment at this time.”

Before these charges, the Hornets had already “extended a qualifying offer to the young forward,” which meant that Charlotte could “match any offer sheet he received. The Hornets had until July 13 to rescind that qualifying offer,” but that date passed without action, so if the team would like to rescind the offer at this point, it would require the consent of Bridges.

If convicted of all three charges, Bridges faces a maximum sentence of almost 12 years in prison. He will return to court on August 19.