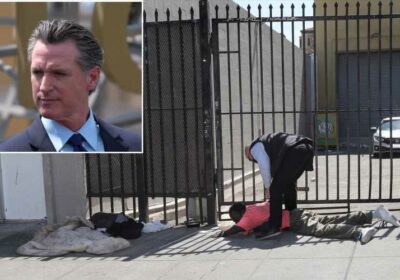 The Bay Area News Group reported that the 54-year-old assailant — who hailed from nearby Berkeley — launched a water bottle at the polarizing politician before being subdued and arrested.

“This morning, the Governor was approached by an aggressive individual” read a statement from the California Highway Patrol, which provides his security. “Members of the Governor’s security detail removed the Governor from the situation and the individual was arrested by CHP officers.”

Newsom later quipped to reporters that the man had an unorthodox method of saying hello.

He was booked into Santa Rita jail on suspicion of “resisting an executive officer and assaulting a public official,” according to the report.

The man’s occupation was listed as “pumping gas,” the site stated.

California cities like Oakland have struggled with spiraling homelessness, especially in downtown areas like the one Newsom was visiting.