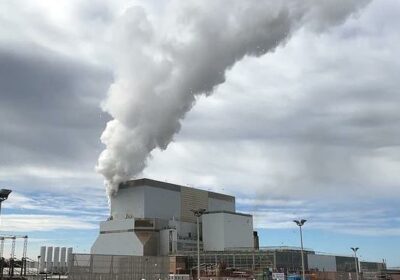 Is this a good time to shut down our top performing nuclear plant? Hinkley Point B is switched off just as country faces crippling energy cost crisis

Britain’s most productive nuclear power station was switched off yesterday, despite warnings that its closure could trigger yet another increase in energy bills.

Releasing a huge plume of steam to mark the occasion, Somerset’s Hinkley Point B split its last atom after nearly five decades of power generation.

Experts warn that decommissioning Hinkley, which contributed about 3 per cent of the UK’s power, means we will have to burn more gas to generate electricity. 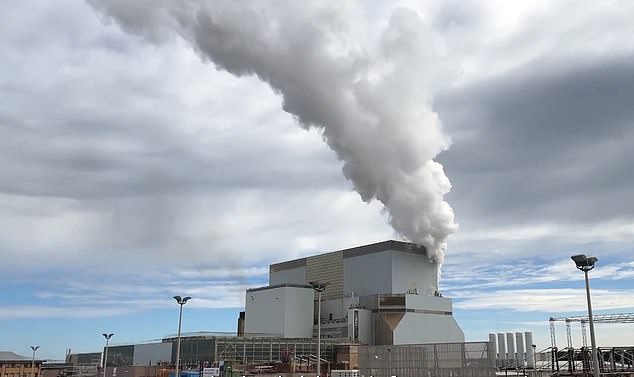 Signing off: A huge plume of steam rises above the Hinkley B nuclear power plant yesterday as it shuts down after 46 years

Henry Edwards, an editor at the energy specialists S&P Global, told the BBC he expected the closure of Hinkley would hit consumers by forcing up the price of gas.

He said: ‘If you take a generator out of the market that’s fully paid off, and doesn’t have the gas price premium that replacement power will have or the carbon cost then, yes, the wholesale price will rise.’

Power firm EDF, which owns the plant, said: ‘Hinkley B has reliably produced zero-carbon electricity for over 46 years, more than 15 years longer than envisaged when built, and will complete its generating phase as the most productive nuclear site the UK has ever had.’

Another reactor at the site, Hinkley Point A, was switched off in 2000. EDF – which is 85 per cent owned by the French government – is building a replacement, Hinkley Point C, which is expected to cost £25 billion and will open in 2027.

Hinkley B’s life cannot be extended any further due to cracks in its graphite core, described by energy expert Dr Paul Dorfman, of Sussex University, as an ‘end-of-life condition’. The power station was originally supposed to be switched off in 2016, but careful management of the technology kept it going until yesterday.

Mike Davies, station director of Hinkley Point B, said: ‘Now our attention turns to the job of defuelling the power station.’

For the next three to four years, teams at Hinkley will get the plant ready to be decommissioned, including removing the remaining nuclear fuel from the reactors and transporting it to Sellafield for storage. Once that work is complete, EDF will hand the station over to the Nuclear Decommissioning Authority.

Over its 46 years, it has boiled the equivalent of 100 billion kettles

It has generated 311 terawatt hours, or 311 billion kilowatt hours – to use the units we see on our domestic energy bills

Jonathon Porritt, a former head of Friends of the Earth, said that while Hinkley Point B will stop generating electricity, ‘the waste that it’s generated over the last 46 years will live on for a very, very long time’.

It came as developers and critics clashed over a proposed offshore wind farm in Wales.

The wind farm, which is in its planning phase and is set to include up to 50 turbines, could supply energy to 500,000 of the country’s 1.38 million households.

But critics of the scheme say the turbines, which would stand just over six miles off the North Wales coast, would harm marine life and affect tourism.

Flintshire Council officials fear the wind farm could ruin the views from Snowdonia and other beauty spots that draw tourists to the area.

A spokesman said the project would be a ‘substantial detractor to several special qualities associated with the designated landscapes of North Wales and the national park’.