Help amid the heartache as Afghan refugees begin their new lives 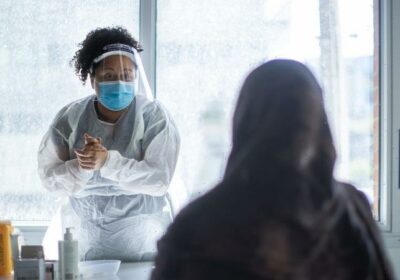 In a high-rise building on the outskirts of the CBD, Mohammad sits on a plastic chair holding his young daughter in his arms amid a sea of neatly lined up Afghan refugees waiting to receive their first coronavirus vaccine.

He is more than 11,000 kilometres from home after fleeing Kabul with his family in August when the Taliban began going door to door searching for anyone who had worked with foreign forces. 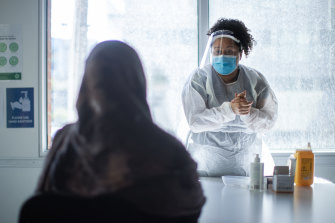 Co-health nurse Amelia Tauqoqooqo says some evacuees lost family members in the rush to get on a plane out of Afghanistan.Credit:Simon Schluter

The family slept for two days on the cold, dusty ground outside Kabul airport, before finally boarding a rescue flight bound for Australia.

“We are so grateful to be here,” Mohammad told The Age during a visit to the assisted settlement accommodation for Afghanistan evacuees late last month. “All I wanted was to save my children’s future.”

When the conversation turns to family back in Afghanistan, Mohammad’s eyes fill with tears and sorrow.

“I am here, but my heart is still back in Afghanistan with my brother,” he said. 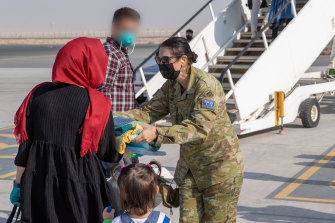 “He is in danger because of my work and I feel so much pain. I wonder if he has enough food to eat. I can’t sleep at night because I worry he is not safe from the Taliban.”

It is a type of anguish cohealth nurse Amelia Tauqoqooqo sees every day.

Some evacuees lost family members in the rush to get on a plane out of Afghanistan, arriving in Australia completely alone.

Others, who are unable to be identified due to security reasons, told The Age how they were threatened and beaten at gunpoint by the Taliban as they were entering the airport.

Several Afghan people died after attempting to cling to a US military plane as it took off from Kabul airport, in distressing scenes projected across the globe.

“Entire families have been separated by this,” said Ms Tauqoqooqo, who has been working with refugees for seven years.

“It’s something I have never seen before and it speaks to the urgency of the situation. There has been significant separation of immediate family; parents and children, husbands and wives separated, which is completely devastating.”

Ms Tauqoqooqo is helping to lead a health program for hundreds of Afghan refugees in Melbourne, assisting in linking them with medical assessments, trauma counselling, COVID vaccinations and testing while they wait for permanent housing.

The program is vaccinating more than 700 Afghan refugees in Victoria.

“I always say to people, if you dropped me in Kabul tomorrow and said understand the system, enrol your kids in schools, find a house and get a Medicare card. Where do you start?” she said.

Knowing how to book a coronavirus vaccine in a foreign land is not the highest priority when you have just fled your home, but Ms Tauqoqooqo points out that the refugees have arrived in Victoria in the midst of lockdown, when the virus is infecting more than 1000 people each day.

“We have to make sure they are afforded the same protections against the virus as everyone else,” she said.

Several of the Afghan women arriving in Australia are pregnant, increasing the urgency to vaccinate them due to the risk of a lowered immune system during pregnancy, meaning they are at heightened danger of respiratory illnesses.

The federal government and AMES Australia – which provides settlement support to migrants – is overseeing their resettlement.

“A lot of asylum seekers have spent long periods in refugee camps and been briefed by Home Affairs while they’re offshore, and they’ve had time to sort of think about what the future looks like,” said Laurie Nowell, a spokesman for AMES.

“But these people have been catapulted into a new country where there’s a level of uncertainty that is compounded by the COVID lockdowns.”

Mr Nowell said many of the refugees needed complex trauma counselling and temporary accommodation in the first instance. 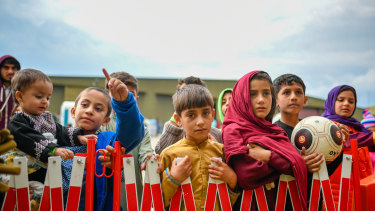 Afghan refugees at a temporary camp at the US army’s Rhine Ordnance Barracks in Germany.Credit:Getty

AMES was also helping to enrol children in online English language schools, to support them before they begin school in Australia next year.

But he said amid the heartbreak, were moments of elation.

Last month, an Afghan father who had been living in Australia and separated from his child for a decade was reunited with them on the ground floor of a Melbourne hotel.

“That was a beautiful moment,” Mr Nowell said.