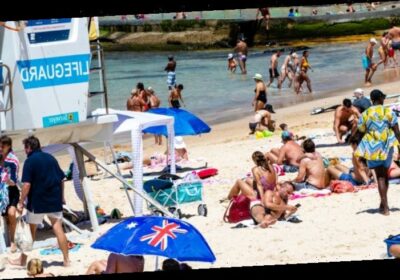 Sydney will experience its hottest day of a five-day heatwave on Tuesday, with temperatures to soar past 40 degrees in the city’s west and reach about 36 degrees in the CBD.

“This is day five of a pretty significant hot spell and the heat is peaking today,” Weatherzone meteorologist Brett Dutschke said. 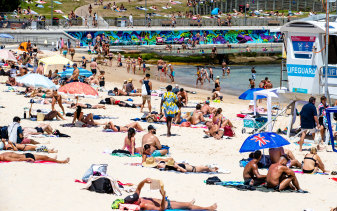 People flocked to Bondi Beach on Monday as Sydney sweltered through a heatwave. Credit:Edwina Pickles

He said it’s one of the warmest continuous periods for Sydney in a decade.

“It’s the hottest spell in 10 years. After today, the city will have had an average maximum of 33 degrees over five days and the western suburbs have been averaging in excess of 35 degrees,” Mr Dutschke said.

While a cool change is expected to bring relief late tonight or early tomorrow morning, he said Sydneysiders are in for another warm evening.

“It’s going to stay very warm well into the evening,” he said.

He said the water is also expected to be “pretty flat” today, before swells pick up again tomorrow with the southerly change.

Surf Life Saving NSW and NSW Ambulance have issued water safety warnings over the weekend, after a spate of drownings across the state.

A snorkeller died on Sydney’s northern beaches on Monday after being pulled from the water at North Narrrabeen, becoming the sixth coastal fatality this year.

In a separate incident on Monday, another snorkeller went missing near Batemans Bay.

The search for the 39-year-old, who entered the water at Richmond Beach at about 3.30pm and was not seen again, continued on Tuesday morning.

“It’s vital you make the extra effort to swim at a patrolled location and do not swim if you’re drinking. We want everyone to have a great day, a safe day.

“By swimming between the red and yellow flags, you’re not only keeping your friends and family safe but also supporting our volunteers on the beach who are giving up their time to make sure you have a good day.”