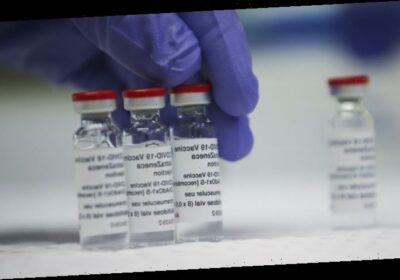 Healthcare workers have been warned against trying to “vaccine shop”, amid reports from two major Melbourne hospitals that some staff had asked to be given the Pfizer coronavirus vaccine over the more readily available AstraZeneca version.

A letter sent to all staff at The Alfred hospital last week from chief executive Andrew Way said while anxiety around vaccinations was understandable, poor treatment of vaccinators or demands for one vaccine over another would not be tolerated. 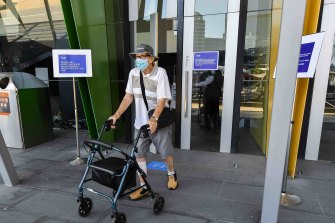 Denis Fitzpatrick, 91, was turned away from the mass vaccination clinic at the Convention and Exhibition Centre on Wednesday after inquiring about getting a jab there.Credit:Joe Armao

Australians older than 70 and those with medical conditions are eligible for the coronavirus vaccine as part of phase 1b of the vaccine rollout but must get their vaccinations through their GP.

Mass vaccination clinics are operating to inoculate healthcare staff and other critical workers including police.

Denis Fitzpatrick, 91, had been unable to secure an appointment with his GP and walked from his Docklands home to the hub on Wednesday, but workers told him to book online.

Robyn, who has ovarian cancer, went to the centre with her mother, Helen, 95, after a 70-year-old friend received the vaccine there without an appointment the day before.

“We thought we wouldn’t have a problem just walking in,” she said. “You would think they would be encouraging people.”

Professor Verhoeven said the government must get mass vaccination centres to full capacity.

“They’ve got to use all the available workforce to do this,” she said. “The Prime Minister said that by the end of March there will be 4 million Australians vaccinated, and that would include the entire cohort of healthcare workers. The reality is that there’s been something like 600,000 people vaccinated in that time across Australia, not 4 million. So we are well, well behind target.” 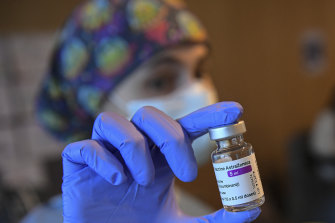 A letter similar to the one circulating at The Alfred was sent out by management at the Northern Hospital in Epping. Staff at the health service had raised almost identical concerns to those of healthcare workers at The Alfred. Comment has been sought from Northern Health.

Professor Verhoeven said it was not appropriate for anyone to request one vaccine over another.

“We’ve got a careful process by which the vaccines have been approved based on the best available scientific advice and what vaccines are actually available to us in Australia,” she said.

“I think it’s inappropriate for health workers to be refusing one vaccine because they think another one is more appropriate for their purposes. It is absolutely critical all healthcare workers receive the vaccine in a timely manner.”

Last week, The Age revealed that more than 20,000 high-risk Victorian healthcare workers, who could be called upon to treat coronavirus patients if there is a new outbreak, were still waiting to receive their first doses of the COVID-19 vaccine, despite being in the first phase of the inoculation rollout.

About a third of healthcare workers are yet to receive their first jabs under the initial phase of the rollout. This is despite the vaccine program having moved on to less urgent phase 1b groups last week.

Widespread rollout delays have been blamed on patchy distribution of the vaccine because of supply constraints from overseas.

Citing Queensland, where two coronavirus clusters were recently spread into the community by unvaccinated health workers, Professor Verhoeven said there was no excuse “in a country, which has access to vaccines, for healthcare workers to be working with COVID-19 patients if they haven’t been vaccinated”.

The European Union said it had already exported 1 million vaccine doses to Australia made up of 300,000 Pfizer doses and 700,000 AstraZeneca jabs. More than 3 million doses of the AstraZeneca vaccine are still on order. The vast majority of Australians are expected to get the AstraZeneca jab.

A staff member who works at The Alfred, who spoke to The Age on the condition of anonymity because they were not authorised to speak publicly, said the concerns from staff had been fuelled by global media reports circulating about a small number of adverse reactions to AstraZenca’s vaccine.

Authorities in Berlin and Munich have again suspended the use of the AstraZeneca vaccine for residents under the age of 60, because of new reports of unusual blood clots.

The action was taken on Tuesday as a precaution ahead of a meeting of representatives from Germany’s 16 states and before further recommendations expected from national medical regulators, Berlin’s top health official, Dilek Kalayci, said.

Professor Wray said Alfred Health had set up a specialist immunisation service to support staff through the vaccine program.

“I encourage you to listen to the experts as well as the results of research that have demonstrated the effectiveness and safety of the vaccine,” he wrote in his letter.