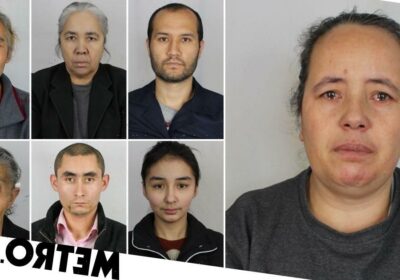 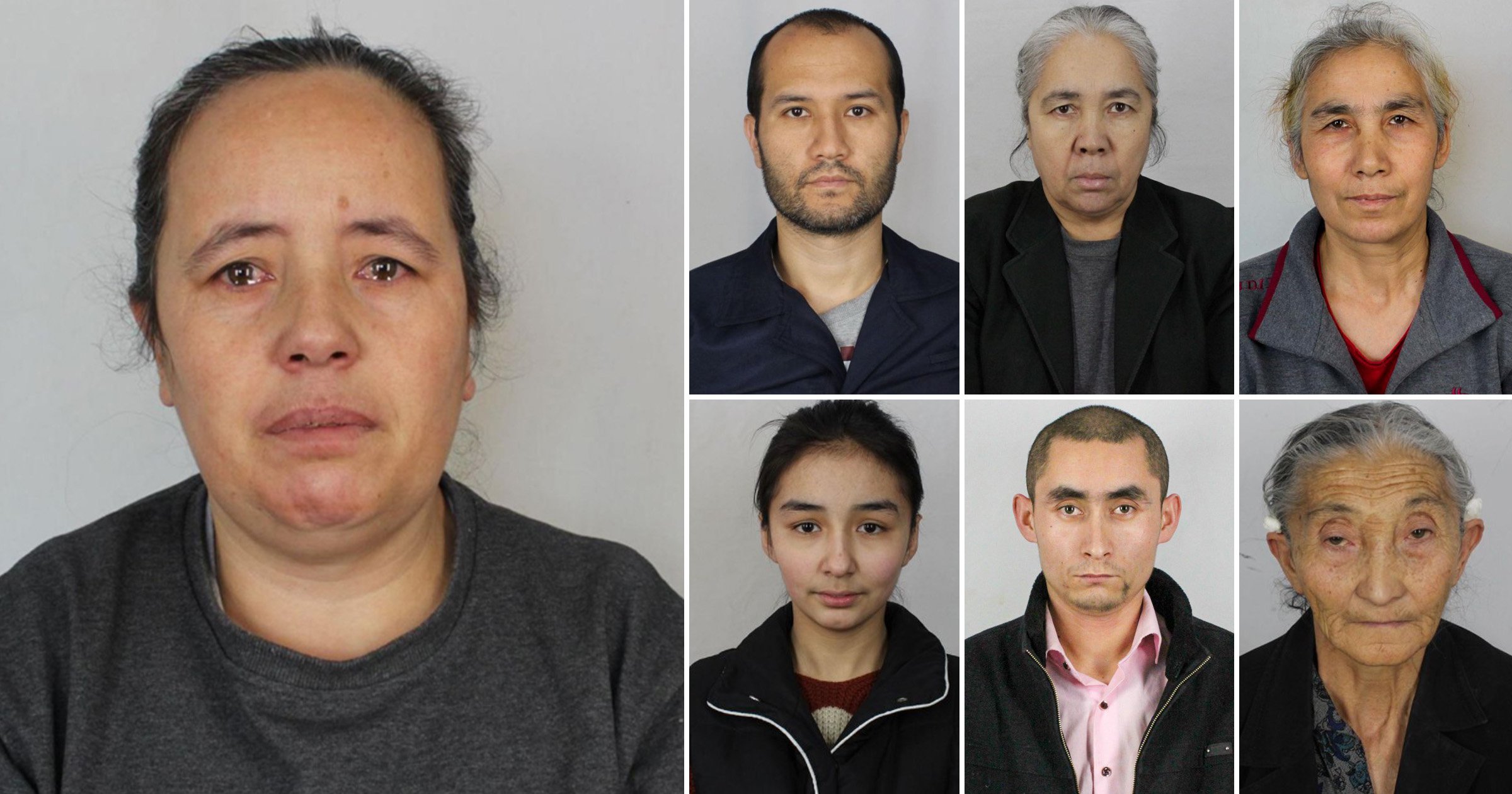 Beijing has long been accused of discriminating against its minority population of Uyghur Muslims.

The government began building so-called ‘re-education’ camps in the northwest Xinjiang region in 2017 – after Uyghurs were blamed for several terrorist attacks.

But the country’s leaders have always rubbished claims of human rights violations as ‘misinformation’, insisting the schools ‘help people free themselves from extremism’.

Now, the BBC has published a damning report claiming to prove up to 1.2 million people have been detained and mistreated ‘not for what they’ve done but for who they are’.

A catalogue of photographs of detainees have emerged, which it appears were taken in Tekes County, going off the labels on their uniforms.

Some of the harrowing images show people with tears in their eyes, with ‘broken spirits’ and shaved heads and beards.

Reiterating the warnings of many Holocaust scholars, the portraits share a disturbing resemblance to those taken of Jewish people at Nazi death camps. 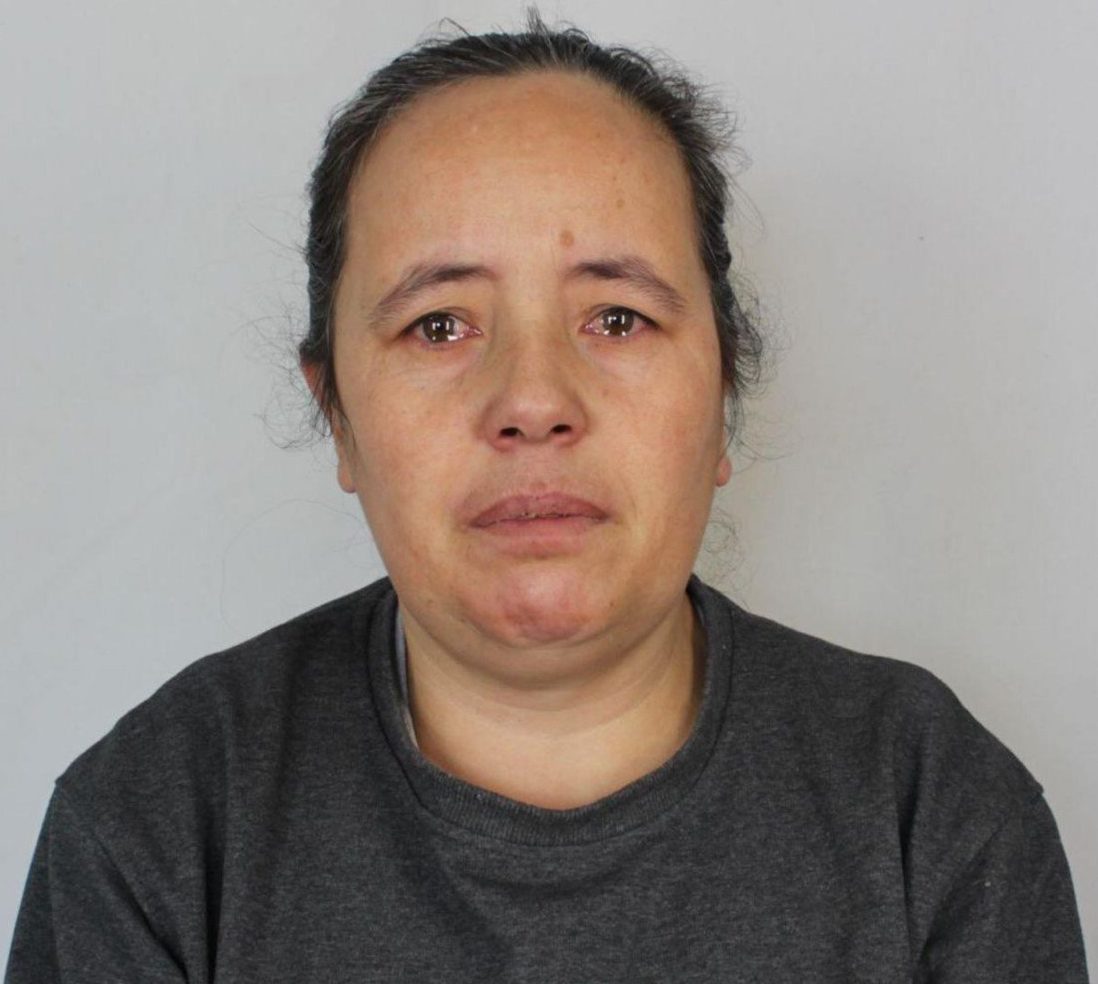 At least 2,884 of these people are believed to have been detained on terrorism charges.

While the rest may officially be considered ‘students’ of a re-education camp, the evidence shows there is little difference between the two.

Many were detained for reasons ‘not stated’ while others have been handed long sentences for ‘crimes’ which include travelling to Muslim-majority countries, growing a beard and being a relative of someone with ‘strong religious leanings’. 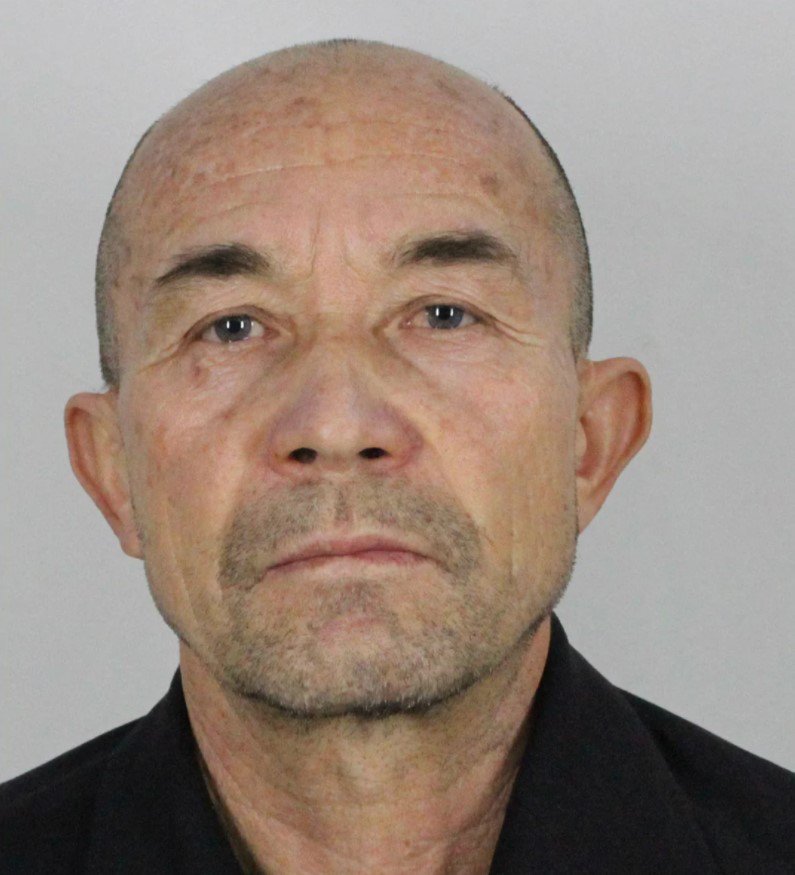 One man was handed 10 years for his ‘strong religious leanings’ because he did not drink or smoke. His mum was also detained just because they were related.

Throughout the 452 spreadsheets, there are multiple examples of people imprisoned retrospectively for ‘crimes’ committed years ago.

One man was given a 10-year sentence in 2017 because he ‘studied Islamic scripture with his grandmother’ in 2010.

Many portraits of prisoners or ‘students’ shows guards armed with batons in the background.

Other photographs appear to show guards practising drills for subduing inmates who are shown to have their faces covered in black hoods and their wrists and ankles chained up.

Internal protocols listed in the files explicitly say it is a requirement for ‘students’ to be handcuffed, shackled and blindfolded when being transferred between facilities or to hospital. 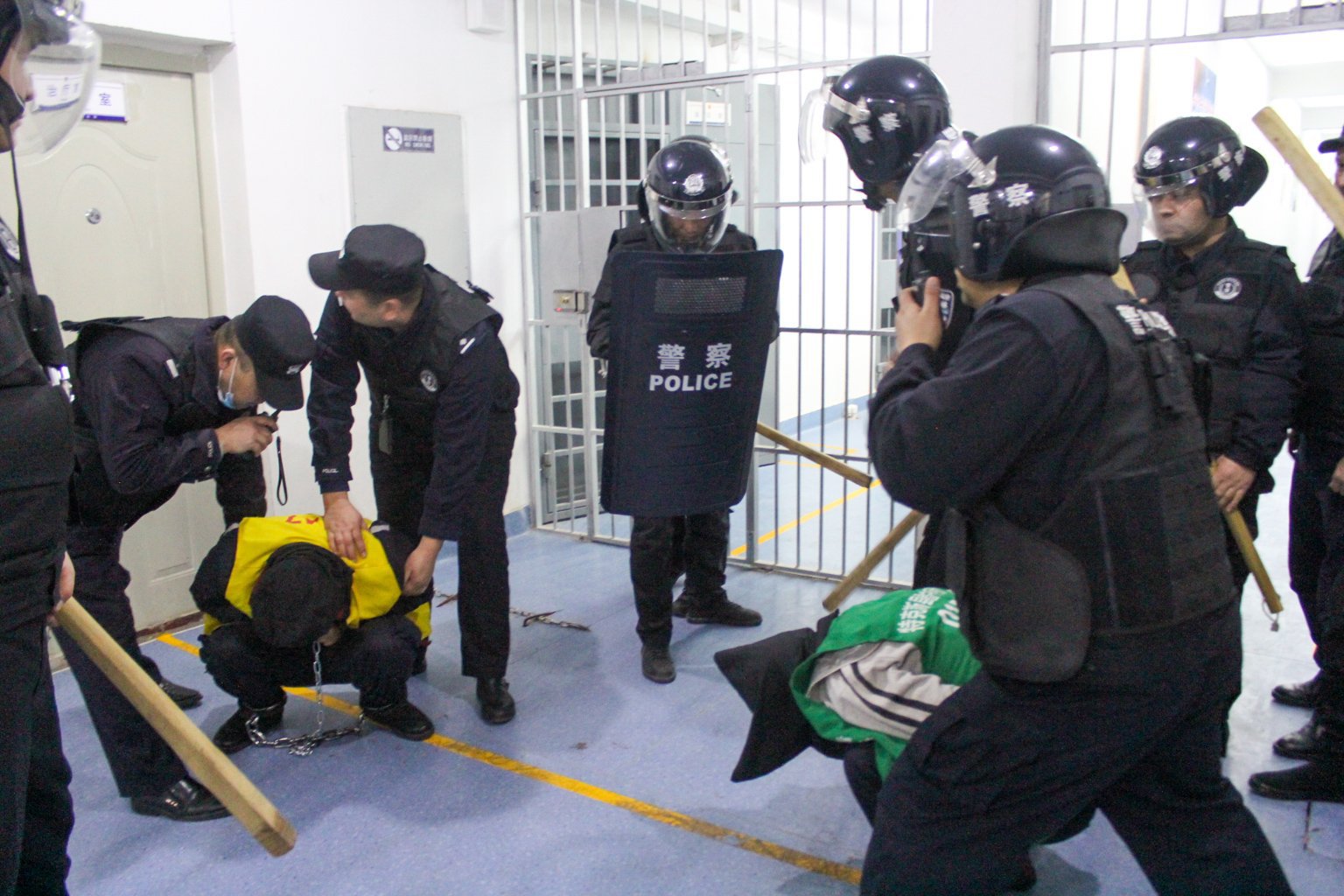 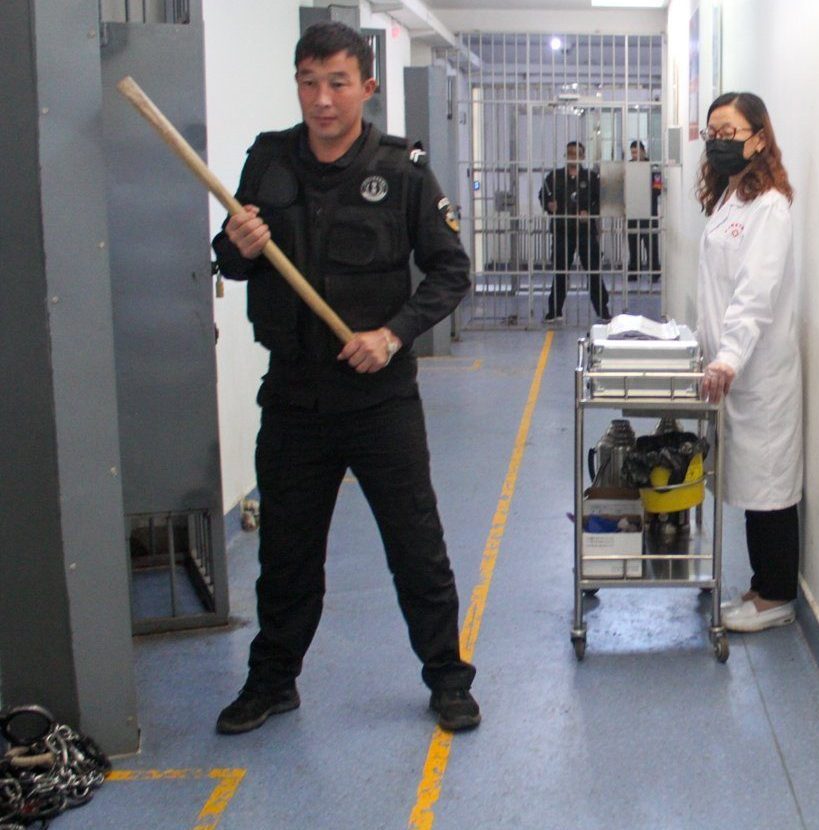 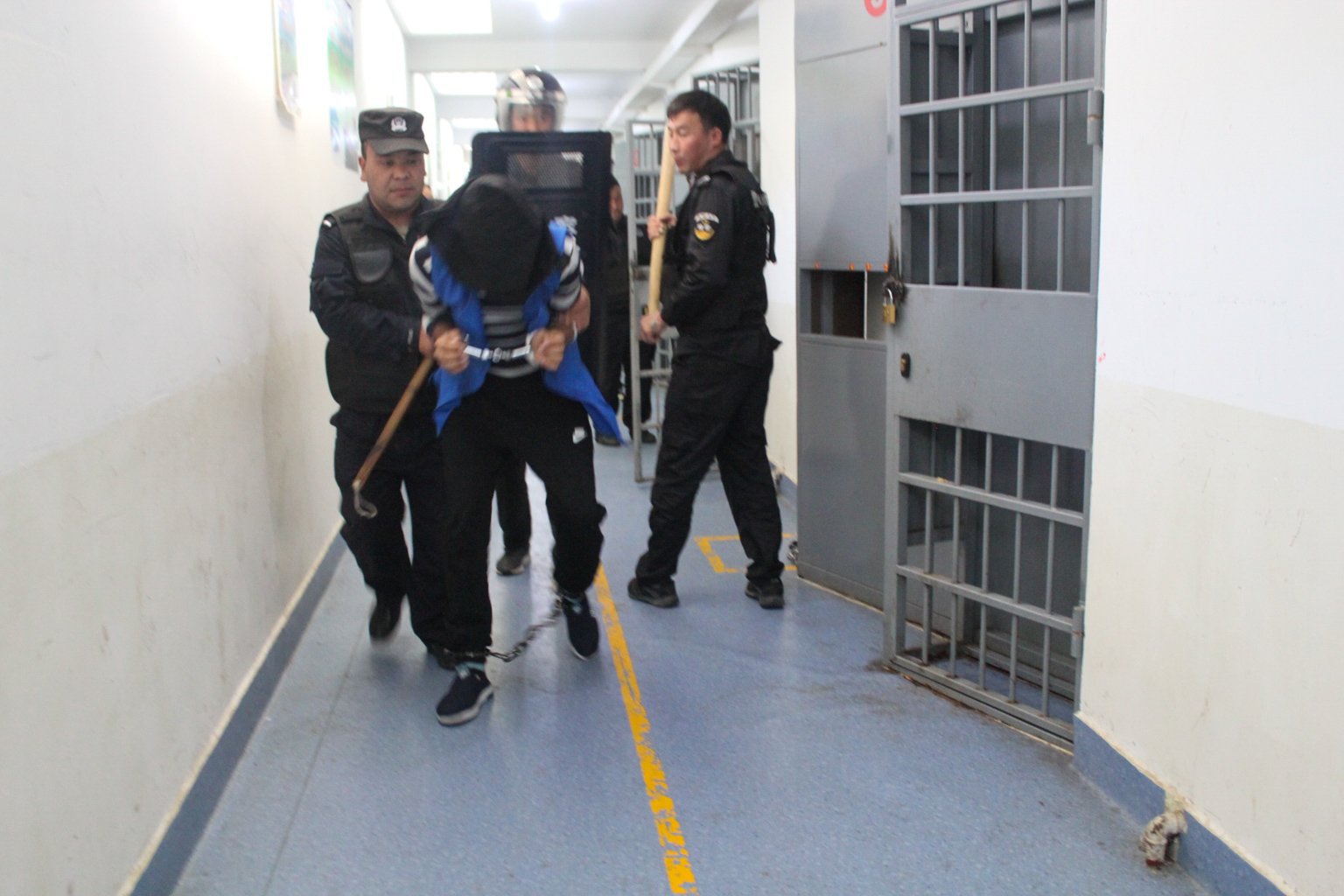 There is a rota for guard shifts in all areas of the camp with anyone stationed at watchtowers armed with machine guns and sniper rifles.

There is also a shoot-to-kill policy in place for anyone who tries to escape.

Groups of people can be seen standing in a line, reciting something – a potential example of indoctrination programmes.

Someone who claims to have hacked police servers in Xinjiang sent the files to Dr Adrian Zenz – who does research at the US-based Victims of Communism Memorial Foundation.

He passed the files over to the BBC and the pictures were verified by several image forensic experts.

There was evidence that some of the pictures had been copied and rotated slightly but it is believed this is because the images are being used as part of China’s efforts to develop facial recognition technology for its surveillance programmes.

It is unclear exactly how many people have been detained but Dr Zenz predicts that in the county of Shufu alone, 22,762 residents were in a prison or a camp in 2017 and 2018.

This is 12% of the adult population. 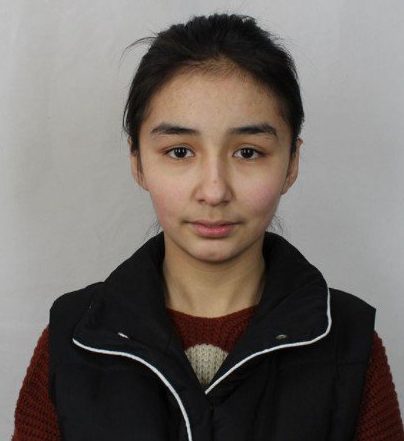 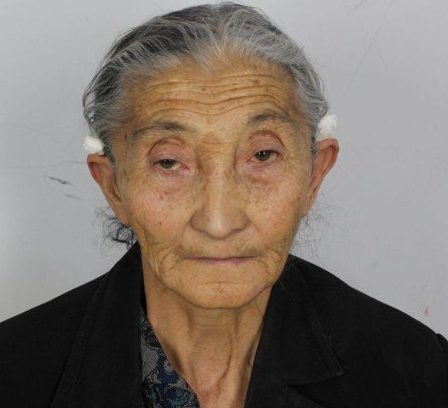 If this statistic is applied to the whole of Xinjiang, it would mean 1.2 million people have been incarcerated.

The youngest person on file was Rahile Omer, who was just 15 when she was detained. The oldest was 73-year-old Anihan Hamit.

The Chinese government did not respond to any information obtained in the files but it did issue a statement saying: ‘Xinjiang related issues are in essence about countering violent terrorism, radicalisation and separatism, not about human rights or religion.’

The spokesperon went on to claim China’s ‘decisive, robust and effective deradicalisation measures’ had achieved ‘social stability and harmony as well as economic development’ in Xinjiang.