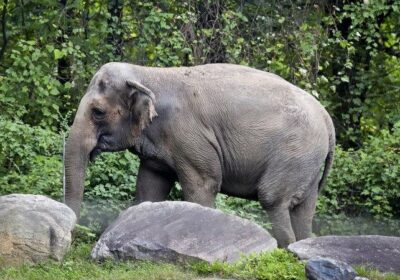 New York: An Asian elephant named Happy that has been at the Bronx Zoo for more than 40 years will remain there after New York’s highest court ruled that she is not a person, in a legal sense, and therefore not entitled to a fundamental human right.

On Wednesday (AEST), by a vote of 5-2, the Court of Appeals rejected an animal advocacy organisation’s argument that Happy was being illegally detained at the zoo and should be transferred to a more natural environment. 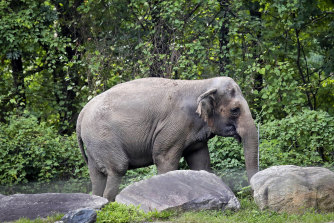 Happy strolls inside the zoo’s Asia Habitat in New York in 2018.Credit:AP

The dispute hinged on whether the cornerstone legal principle of habeas corpus — which people assert to protect their bodily liberty and to contest illegal confinement — should be extended to autonomous, cognitively complex animals like elephants. No, the court said.

“While no one disputes the impressive capabilities of elephants, we reject petitioner’s arguments that it is entitled to seek the remedy of habeas corpus on Happy’s behalf,” Janet DiFiore, the chief judge, wrote. “Habeas corpus is a procedural vehicle intended to secure the liberty rights of human beings who are unlawfully restrained, not nonhuman animals.”

But in a dissenting opinion, Judge Rowan D Wilson said that the court had a duty “to recognise Happy’s right to petition for her liberty not just because she is a wild animal who is not meant to be caged and displayed, but because the rights we confer on others define who we are as a society.”

The case appeared to be the first examining whether an animal is worthy of so-called personhood to reach so high a court in the English-speaking world. And while the outcome keeps Happy where she is, the split decision was unlikely to quell the debate over whether highly intelligent animals should be viewed as something other than things or property.

The case was brought as part of a campaign by the Nonhuman Rights Group, an animal advocacy organisation engaged in a long-running legal push to free captive animals. Last month, even as Happy’s fate hung in the balance, the group asserted a habeas claim seeking to have three elephants removed from a Fresno, California, zoo.

In New York, the group sought to have Happy moved from the Bronx Zoo, which it said was a prison for her, to one of two vast elephant sanctuaries, which it described as more natural settings that would make Happy’s life happier.

“She’s a depressed, screwed-up elephant,” Steven Wise, the group’s founder, said in an interview before the ruling was announced.

On the other side of the case was the Wildlife Conservation Society, which operates the zoo and flatly rejected the group’s assertions about Happy’s Bronx existence. She is “well cared for by professionals with decades of experience and with whom she is strongly bonded,” the society said in a statement before the ruling, adding that the case amounted to “blatant exploitation.” 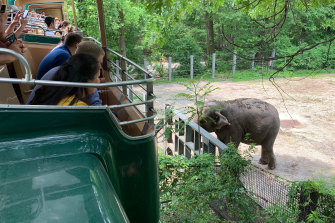 Happy in her enclosure at the Bronx Zoo in New York.Credit:Gigi Glendinning, Nonhuman Rights Project

The Nonhuman Rights Group and the Wildlife Conservation Society did not respond immediately to a request for comment on the ruling.

The subject of the argument was visible on a cool, clear day in May from a monorail trolley rolling through the zoo’s Wild Asia section. She and another Asian elephant, Patty, moved about slowly, separated by a fence in the 0.4 hectare, tree-lined enclosure they share, with logs scattered around and a pool nearby.

“Both of our elephants look great,” said a tour guide, offering an assessment that could be hard for the average person to contradict. Happy wandered across her grassy patch in the direction of Patty, ears, trunk and tail waving in morning sun. “They get a lot of attention.”

Elephants are extremely social by nature, roaming in herds and communicating with one another in everything from low-frequency rumbles to the slight angling of their bodies. They have been observed in various mourning behaviors when one of their number dies.

“We reject petitioner’s arguments that it is entitled to seek the remedy of habeas corpus on Happy’s behalf.”

Happy did not experience much of that natural life. Born in the early 1970s, probably in Thailand, she was captured at a young age and brought to the United States, where she wound up at a Florida petting zoo with six other elephants, each named for Snow White and the Seven Dwarfs characters.

The Bronx Zoo acquired her and another of the seven, Grumpy, also a female, in 1977. The two lived initially with an older female elephant, Tus, in the Elephant House (not in the Wild Asia section where Happy is now kept).

Tus, Happy and Grumpy were trained to do tricks, give rides to children and perform at “Elephant Weekends,” wearing costumes made by an edgy downtown performance artist and “playing” tug of war with firefighters and college football players. (The elephants usually won.)

Eventually, they were moved to Wild Asia, as zoos across the country retooled or abandoned their elephant exhibits, partly in response to a growing animal rights movement. Tus died in 2002. A few months later, Patty and a second elephant, Maxine, attacked Grumpy, fatally wounding her. Happy could no longer be kept with them.

In 2006, a young female elephant, Sammy, was brought in to be Happy’s new companion, but she died soon after arriving. The zoo decided against adding any more elephants, focusing instead on helping endangered members of the species in the wild.

That left Happy alone on one side of a fence, with Patty — and, until she died several years ago, Maxine — on the other. The barrier notwithstanding, zoo officials say Happy is not isolated and that she and Patty touch trunks, smell each other and communicate.

That has not stopped Happy from becoming an animal rights cause célèbre. Her trip through New York’s courts began in 2018 after the Court of Appeals rejected a habeas appeal by Wise’s group on behalf of two chimpanzees.

Eugene M Fahey, a judge on the court at the time, joined his colleagues in rejecting the chimp case. But in a concurring opinion, he said the matter presented “a deep dilemma of ethics and policy that demands our attention.”

“The issue of whether a nonhuman animal has a fundamental right to liberty protected by the writ of habeas corpus is profound and far-reaching,” he wrote. “It speaks to our relationship with all the life around us. Ultimately, we will not be able to ignore it.”

The Nonhuman Rights Project filed a habeas petition on Happy’s behalf, and in February 2020, a trial court judge rejected it. The judge, Justice Alison Tuitt of Bronx State Supreme Court, said she was bound by legal precedent and had come to her conclusion “regrettably.”

“This court agrees that Happy is more than just a legal thing, or property,” she wrote. “She is an intelligent, autonomous being who should be treated with respect and dignity, and who may be entitled to liberty.”

An appellate court affirmed the lower court ruling, setting the stage for a hearing last month before the seven-judge Court of Appeals.

The judges questioned lawyers on both sides about how autonomy is defined for members of the animal kingdom, the meaning of bodily liberty in this instance and the potentially larger effects of a ruling that would move Happy from her current home.