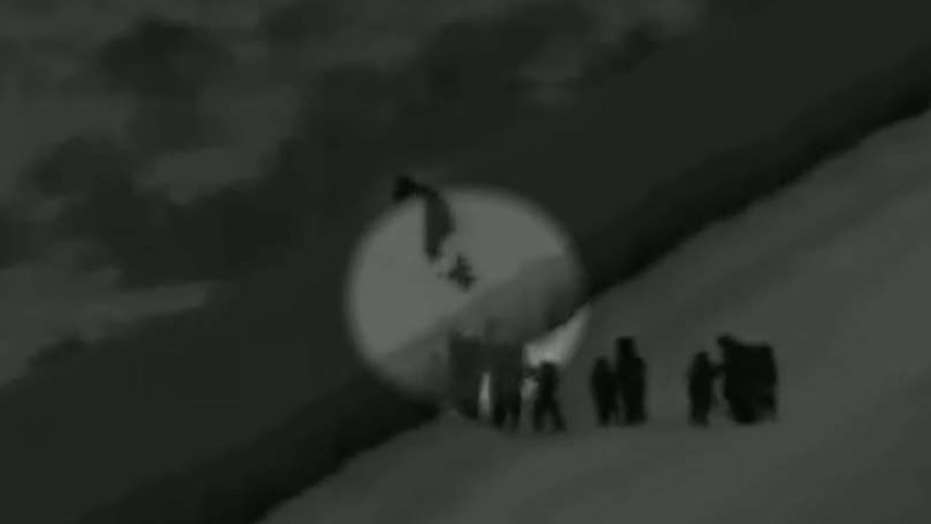 A child with a group of migrants from Guatemala is seen on surveillance tape dropping 16 feet to the ground after falling off a ladder. The girl was treated for minor injuries and the group was taken into custody by Border Patrol.

A 3-year-old Guatemalan girl traveling with nearly 50 other illegal immigrants was injured Sunday when she plummeted 16 feet from the top of an outdated section of border wall in Arizona, shocking surveillance video shows.

U.S. Customs and Border Protection agents soon descended on the spot, east of the San Luis port of entry, and rendered aid to the toddler — who miraculously incurred only minor injuries. Officials on Monday released video of the terrifying tumble on Twitter.

Agents apprehended 49 people from Guatemala who used a smuggler's ladder to illegally cross the "outdated section" of the wall, according to CBP. The 3-year-old girl was on the ladder when she fell, officials said.

"I don't know if the mother was with the child," Jose Garibay, Border Patrol's Yuma Sector spokesman, told the Arizona Republic. But in the video you can see that the child actually falls from almost the top of the border wall and lands on the ground and may or may not have tried to be stopped by the individuals who are in the group."

Separately, the agency said border patrol agents in southwest Arizona rounded up an even larger contingent of border jumpers on Thursday.

Ajo station officials were met with 242 Central Americans who had "crawled over and under the crude vehicle barrier separating the United States from Mexico." 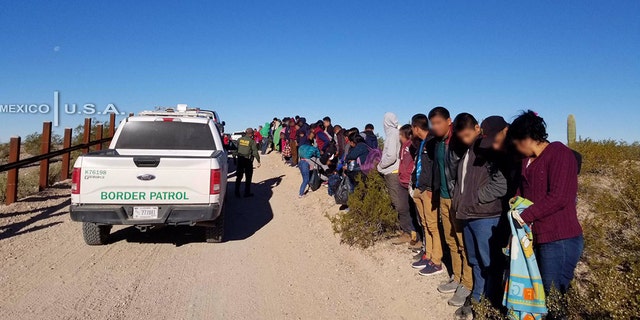 A group of 242 Central American migrants were found in the southwest Arizona desert on Thursday.
(U.S. Customs and Border Protection)

The group, which was discovered west of Lukeville, Ariz., included 130 juveniles, 11 of them traveling without a legal guardian. Two of the juveniles were taken to a local hospital for treatment, the agency said. 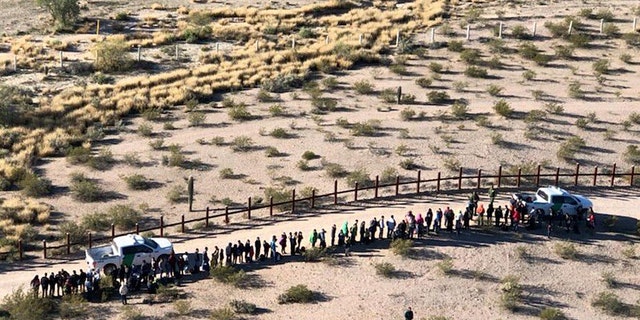 The group discovered Thursday included 130 juveniles, 11 of them traveling without a legal guardian, CBP said.
(U.S. Customs and Border Protection)

"If not for the [Department of Homeland Security] medical staff, several more would have required transportation to local hospitals for advanced medical examination, removing agents from border security operations," CBP said.

The two incidents at the border come roughly a week after a group of about 110 Central American migrants were caught on video scaling a section of the border wall in the Yuma sector.

In that video, which is 55-seconds long, a group of illegal immigrants climb the wall with the aid of a smuggler's ladder. After the group lands on the U.S. side, the smuggler is seen running away from the wall, hauling the ladder.

The incidents highlight the continuing struggle to contain and disrupt the prolific smuggling operations penetrating the southern border. Earlier this month, a group of 376 Central American migrants were apprehended after they also illegally crossed the U.S.-Mexico border near Yuma. 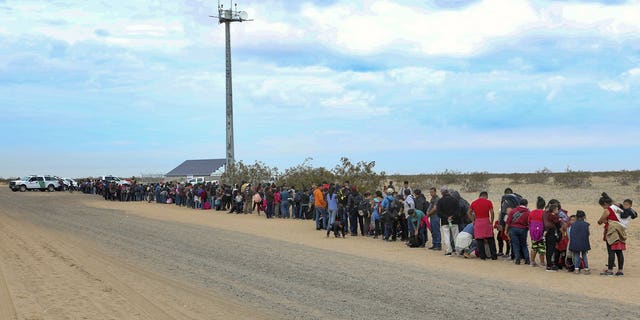 In Yuma, authorities said the group — which included 179 children — dug under a steel barrier in seven spots about 10 miles east of a border crossing in San Luis. Once inside the U.S., the massive contingent made no effort to elude immigration agents. The unusually large group was almost entirely made up of people from Guatemala.

Rep. Chris Stewart: If Congress can produce a border security deal it will be ‘a real surprise’

Democratic negotiations over a border wall have gone from no to ‘hell no,’ says Republican Congressman Chris Stewart from Utah.

Since October, authorities have also arrested more than 100 people believed to be El Salvadorian gang members in the same sector, the same sources added. The notorious MS-13 gang, which originated in Los Angeles prisons before infiltrating the rest of the U.S., is mainly comprised of El Salvadorans.

The southwest Arizona desert is less remote but arrests have also sharply increased after years of relative quiet. The Border Patrol's Yuma sector made 7,857 arrests in October and November, more than double the same period a year earlier.

Fox News' Griff Jenkins and the Associated Press contributed to this report.