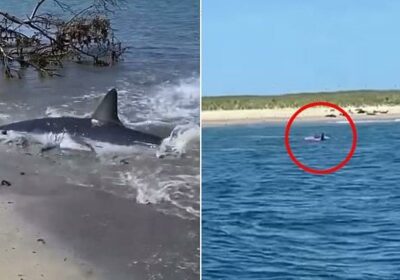 ‘You can see the blood!’: In first sighting of the season, great white shark tears apart seal in front of horrified tourists in Nantucket, as mako hits the beach on Long Island

A great white shark feasting on a seal in front of terrified tourists off of Nantucket’s coast marked Massachusetts’ first official shark sighting of the season.

The spotting was reported and recorded on May 29 by Kyla Little, according to Storyful.

The white shark captured its prey just yards from the beach, shocking onlookers on Little’s boat, as a blood darkened the water.

A woman in the video can be heard yelling in the background: ‘Oh my God, you can see the blood!’

Another spectator can also be heard asking, ‘There’s literally sharks that close?’.

In the aftermath of Saturday’s event, Little told Storyful: ‘We’ve spent so much time on and in these waters and have never seen anything like that, especially so close to the shore.’

‘Seeing it with the beach so close and people in the background next to the seals was pretty crazy,’ she added.

The sighting occurred near the island’s Green Point Lighthouse.

It was registered as the ‘the first official sighting of the season,’ said the Atlantic White Shark Conservancy. 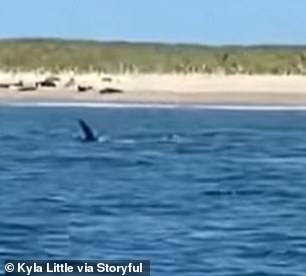 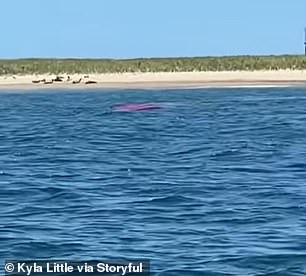 A great white shark (left) was spotted off the coast of Nantucket’s Green Point Lighthouse by people on a boat on Sunday, as it hunted down a seal (right) 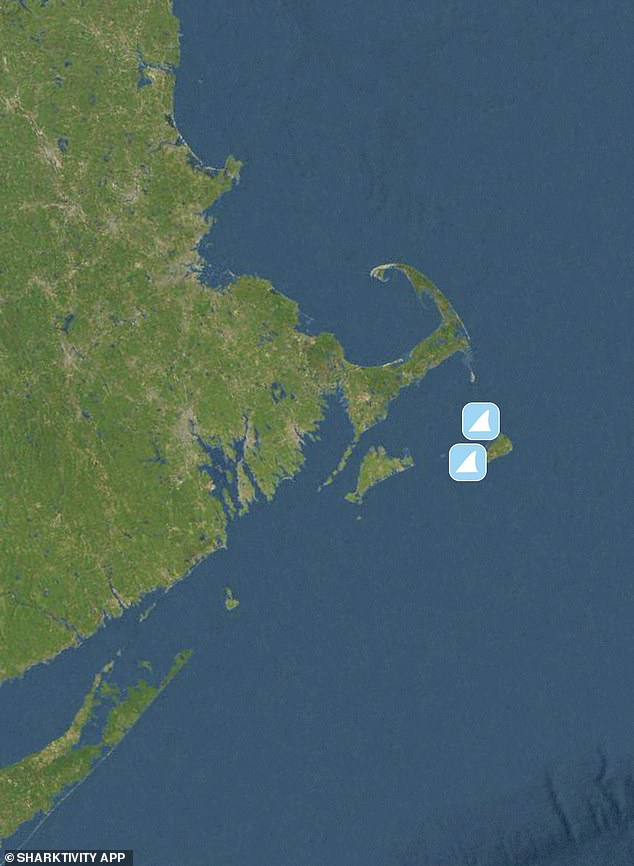 The great white’s sighting over Memorial Day weekend was logged into Sharktivity App along with the spotting of another shark, as the app tracks and confirms great white sightings

It remains unclear how large the shark was but great white’s are the world’s largest predatory fish.

However, the great white wasn’t the only shark spotted over Memorial Day weekend.

A commercial fisherman came across a shortfin Mako shark that was swimming off the coast off a beach creak near Point Lookout, Long Island.

The fisher notified the Department of Environmental Conservation to rescue the dark-blue colored shark, which was become beach.

The Mako was estimated to measure 10-feet long. The fish had disappeared by the time conservationists arrived. 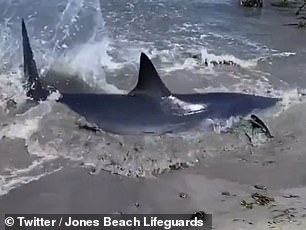 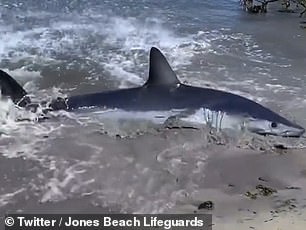 A dark-blue, shortfin Mako shark (left and right) was spotted on Memorial Day wiggling off the coast of Long Island’s Point Look out by a fisherman

After the three-day holiday, the Atlantic White Shark Conservancy urged people in the New England and the Tri-state area on Twitter to report further sightings over the summer on the Sharktivity app, which verifies and locates great white sharks.

‘If you’re heading to the beach, make sure to be Shark Smart and follow safety guidelines and report sightings through our Sharktivity app,’ the conservancy wrote online.

In 2021, the number of shark sightings off of Massachusetts coasts, noticeably around Cape Cod, surged by 24 percent compared to the previous year, according to data shared by the Atlantic White Shark Conservancy. 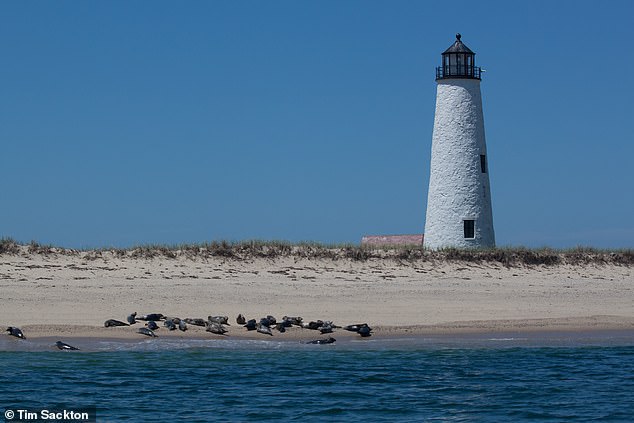 Massachusetts state officials are reporting a rise in seals in the area, possibly correlating it to the increase in shark popular off of New England’s coast. Pictured: Seals on the beach in front of the Great Point Lighthouse in Nantucket