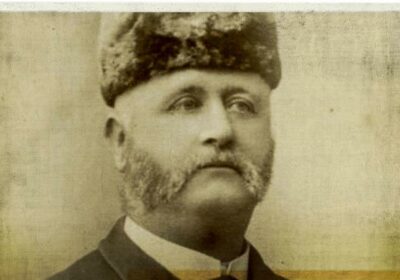 When then chief commissioner Mick Miller asked a question, he expected an answer sooner rather than later. Yet after nearly 40 years of research the simple answer to one seemingly simple question he posed remains unresolved. 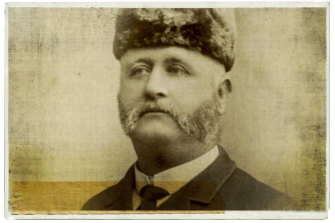 One of those tasked with finding the answer was Inspector Ralph Stavely, who had a passing interest in school history.

Now retired and the force’s recognised historian, he no longer chases crooks but long-forgotten facts. But Stavely knows the true number of those who died will never be known.

“There was no list and in many cases no records to show who had died on duty,” he says.

Before 1920 about 10 per cent of police died while serving, with no records to show if their deaths were work-related. “A lot of people contracted illnesses through the line of duty. Working on floods, getting a chill that progressed to pneumonia or contracting diphtheria from a prisoner were not listed as duty deaths,” Stavely says.

“There is no way we can be confident that we have accounted for them all.”

Take, for example, the tiny newspaper article reporting a constable drowning in a bush river where there are no corroborating official documents.

Stavely says Miller realised the history of the force, including documenting those who had died while performing their duty, had not been recorded. “He had a real passion for the subject and said ‘let’s get the job done’. He committed the resources and opened doors that had been closed.”

After four years of research the project team came up with a list of 129 police killed in the performance of their duty. Now that number has grown to 174, with seven new cases about to be acknowledged.

There was to have been a ceremony at Melbourne Cemetery to mark the graves and pay tribute to the long-dead police, but COVID lockdowns have meant it will now take place early next year.

Stavely found this was not just a matter of trying to set the record straight. Each case left a family legacy, with generations affected by the death.

“We found that old events cast a very long shadow and impact for decades,” he says.

With no effective welfare net, many police widows and children were expected to fend for themselves.

Discovering the number of fallen was just the start. There was then the matter of recognising each officer. 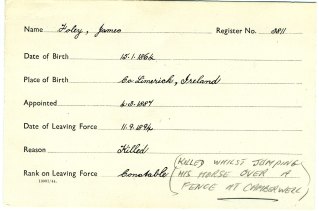 The Police Memorials Committee undertook to visit every grave in Victoria to check their condition. Many had fallen into disrepair while others were unmarked. One officer was lost at sea. Stavely says as police were not well paid, many could not afford cemetery headstones.

Superintendent Peter O’Neil headed the team assigned to find the graves. “It is very sad. When families didn’t have the money they were buried in unmarked graves.”

Two retired detectives began checking cemetery records and were able to find many of the unmarked graves. Some, where the records are poor or have disappeared, will never be found.

So far the group has restored 30 burial sites. It has had six new headstones made for the Melbourne Cemetery.

At Mildura, a veteran senior constable has taken it upon himself to maintain the graves of five fallen comrades.

While bushrangers such as Ned Kelly have memorials (and a cottage industry in stubby holders and keyrings), it is only relatively recently that the three police his gang killed – Sergeant Michael Kennedy, Constable Michael Scanlan and Constable Thomas Lonigan – had their graves at Mansfield restored.

Today we see police who have to deal with terrorism, dangerous gangs, international drug cartels and the generally unhinged. However, the truth is the law and order game was much more dangerous in the horse and buggy days than in the modern era.

Those early days were dangerous and tragic, with 24 police killed in the first 10 years. Poorly trained cops had to learn to fend for themselves. Today a “police in trouble” call results in dozens of armed police arriving in minutes. Back then it could take days. 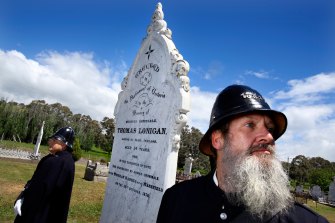 Members of the Victoria Police Historical Society at the dedication service in Mansfield to mark the restoration of the graves of the three officers slain by the Kelly Gang.Credit:Angela Wylie

They were shot, fell off horses, hit by trains, drowned and one was killed when he was hit by a prisoner wielding a hammer. Another died from chemicals that entered his system through a cut while attending an autopsy.

Police work relationships were more robust. A constable, outraged that he had been sacked for repeated drunkenness, shot his sergeant dead.

The modern cop faces a daily COVID scare when dealing with the public, with hundreds forced into quarantine in the past year. Then the fear was deadly pneumonia, cholera and flu. You were at greater risk from a nasty bug than a rifle slug.

“Some police died in the Spanish Flu pandemic, but it is impossible to establish if they were infected while on duty,” says Stavely.

The Victoria Police Force was formed in 1853 with an initial strength of about 900, including 26 “gentleman” officers who were allowed to operate private businesses to supplement their income.

One of the first to join was James Deacon, 30, a soldier from Ireland who was given the badge number of 270.

In June 1871 Constable Deacon was returning to the Stud Depot with a dray loaded with wood when he stopped to feed his horse outside Gibson’s Hotel in Oakleigh. (The hotel included stables and occasionally doubled as a morgue.) His 13-year-old son, who was there to help, cracked a whip behind the dray, startling the horse and causing it to bolt. Deacon fell to the ground and was run over by a wheel, causing fatal injuries.

In his official papers, the handwritten reason for leaving the police force was given as “killed by police horse”. He left a wife and six children.

Over the years the story of James Deacon was forgotten, so much so that even his descendants did not know the circumstances of his death.

Jeanne Crowley says it was only when her daughter-in-law started researching their ancestry that she found Deacon had been a police officer, joining shortly after migrating from Ireland.

She said police had invited her to a formal ceremony at the Melbourne Cemetery to unveil a plaque in Deacon’s honour. 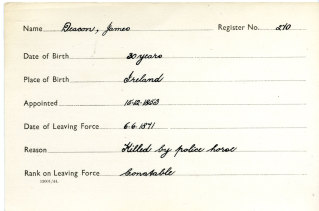 One of the few official records of Constable James Deacon. Credit:Victoria Police

The records show how often police in that era died in seemingly nonthreatening circumstances.

To join the police force these days you must show you can swim. Clearly that was not an initial requirement. On June 7, 1880, Constable Patrick Mallavey was on wharf patrol duty on the Yarra when he tripped in a hole on a plank, fell into the river and could not make the bank.

On the night of October 5, 1864, Constable John McElveen was riding to the Eltham Police Station to deliver voting papers. Trying to cross a flooded creek bridge, he, his guide and his horse fell into the water. The horse clambered up the bank. The men drowned.

On October 15, 1888, Constable Daniel Courtney died while on night shift when he was hit by a train at Flemington.

On March 24, 1893, Constable James Slattery tried to take a shortcut to the Magistrates’ Court to have some documents signed. Rather than cross at a rail bridge he slipped over a fence and was struck by the Essendon to Melbourne steam train.

For Mounted Constable James Foley the day of September 11, 1894, began investigating the theft of pigeons from a loft in Camberwell.

Returning on horseback to his station in Caulfield he decided to exercise his horse by jumping a two- rail fence, clearing it three times. On the fourth attempt the horse hit the top rail, flipped and landed on Foley, causing fatal injuries.

In his 34-year police career, Sub-Inspector Edward Hall developed a reputation as a tough cop (“a shrewd, energetic and vigilant police officer”) who had once arrested Ned Kelly for horse stealing. Depending on which version you want to believe, he tricked Kelly to a meeting and pistol-whipped him or overwhelmed the bushranger with the help of brave bystanders after Kelly slashed him with his horse spurs. Either way, Kelly ended up serving three years. Seven years after Hall arrested Kelly, the outlaw’s gang shot dead three police at Stringybark Creek.

On March 24, 1892, Hall and police magistrate James McLuckie were travelling back to Horsham in a police buggy when it flipped after hitting a stump. Seriously injured, Hall was taken to hospital, where he developed bronchitis and died a week later.

At the new dedication the seven police at the Melbourne Cemetery will receive the pomp and ceremony they didn’t receive when they were buried more than 100 years ago. Chief Commissioner Shane Patton says: “We will never forget the sacrifices of our colleagues – no matter how long ago they served.

“This dedication ceremony provides an opportunity to pay our respects to seven dedicated officers and reflect on how far we have come as an organisation.

“We honour their contribution today and every day.”