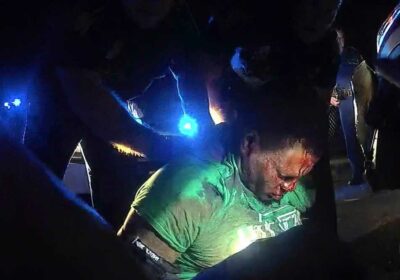 Newly released bodycam video shows a black man being stunned, dragged and punched by Louisiana state troopers before he died in custody following a high-speed chase.

“I’m your brother! I’m scared! I’m scared!” Ronald Greene, 49, can be heard telling the white officers as he was zapped with a stun gun after failing to pull over for an unspecified traffic violation outside of Monroe.

Footage of the arrest on May 10, 2019, was obtained by the Associated Press after authorities refused to release it for two years.

In the full 46-minute clip, one trooper can be seen wrestling the unarmed Greene to the ground, putting him in a chokehold and punching him in the face while another can be heard calling him a “stupid motherf——.”

“I’m sorry!” Greene can be heard wailing as another trooper uses a stun gun on his backside and warns, “Look, you’re going to get it again if you don’t put your f—king hands behind your back!”

The footage also shows Greene briefly being dragged facedown by another trooper after his legs had been shackled and his hands cuffed behind him.

He is then left unattended, facedown and moaning for more than nine minutes, as the troopers used sanitizer wipes to get the blood off their hands and faces, video shows.

“I hope this guy ain’t got f—king AIDS,” one of the troopers can be heard saying.

Several minutes later, Greene is seen limp, unresponsive and bleeding from his head and face.

It’s unclear what exactly caused Greene’s death, but the case has drawn backlash — after authorities initially said Greene died when he crashed his vehicle into a tree.

His family has also filed a federal wrongful-death lawsuit alleging troopers “brutalized” him and “left him beaten, bloodied and in cardiac arrest.”

Lee Merritt, an attorney representing Greene’s family, said the footage “has some of the same hallmarks of the George Floyd video, the length of it, the sheer brutality of it.”

“He apologized in an attempt to surrender,” Merritt said.

Louisiana State Police declined to comment on the footage, saying the “premature public release of investigative files and video evidence in this case is not authorized and … undermines the investigative process and compromises the fair and impartial outcome.”