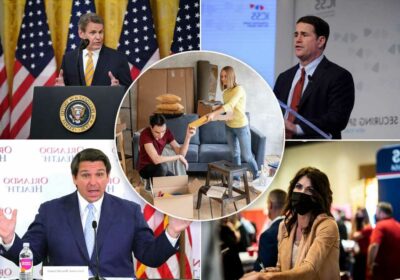 The drawn out and restrictive lockdowns in blue states have pushed many to move themselves and their families to red states, a group of GOP governors told Fox News.

Speaking to host Sean Hannity at a town hall for Republican governors Wednesday night, the group of six leaders from Arizona, Florida, Iowa, New Hampshire, South Dakota and Tennessee said that each were seeing new residents flood their states to escape liberal policies that prevented re-openings.

“[Former President Ronald] Reagan said if the pilgrims landed in California they would have never discovered the rest of the country,” Arizona Gov. Doug Ducey said, adding, “Nobody leaves California because they want to.”

“[T]he lack of opportunity is pushing them out,” he continued, calling the Golden State’s declining population “the result of leadership, policy and lack of quality of life and economic opportunity.

“I think people across the country are looking around, unsatisfied, in many states with life in particular,” Tennessee Gov. Bill Lee noted, echoing his GOP counterparts about what he’s seen and heard from new residents in his state.

Discussing how red and blue states’ responded to the pandemic, the Tennessee governor remarked that, “suddenly the differences between our states and those blue states are stark.”

As for those differences, Lee noted that “Tennessee is the third lowest tax per capita state. Our regulation in this state is really different than in these states that increased regulations.”

“The health crisis is over. The emergency is over. We have fully opened up, and we’re moving our state forward,” he continued

In South Dakota, Gov. Kristi Noem said her team had launched a campaign to encourage frustrated law enforcement officers to move to the state amid left-wing condemnation of the police.

Thus far, she said, “hundreds and hundreds” from 41 states have responded.

Even without the campaign, she said, many were looking to South Dakota as a potential home for the first time as a result of Democratic leadership amid COVID.

In Florida, Gov. Ron DeSantis said, “These people that are coming, they are registering as Republicans.”

“I also have come across a lot of people who were Democrats, and lockdowns turned them into Republicans,” DeSantis added.

As for what pushed those new Sunshine State residents to move from their liberal enclaves, DeSantis argued the logic was straightforward.

“They said, ‘I am in California and they are locking my kids out of school. I come to Florida they are in school and people are free and happy,’” the Florida governor explained.

Following the most recent census count, California and New York, two of the bluest states in the nation, each lost a seat in the House of Representatives because their populations had declined relative to other states.

In California specifically, Gov. Gavin Newsom, a Democrat, will face a recall election over his handling of the pandemic.

In the past year, he has seen his approval rating plummet in response to the stringent restrictions he placed on businesses and the state’s closure of schools, neither of which played a strong role in actually stopping the spread of coronavirus in the state.