Elizabeth Cook is just nine but is utterly devoted to pigeons

Cooing, strutting, pecking, warbling and mating very energetically in a series of home-made wooden and mesh pens in a back garden in Devon, are 76 pigeons cared for by a small girl called Elizabeth Cook.

She feeds them, talks to them, lets them sit on her head, shoulders, arms and hands and chats on, and on, to them. ‘Here boy, come boy, good boy. Hey, watch those claws!’

Every morning after breakfast, she lets them out, watches them soar in mad circles for an hour or so, then blows her whistle to call them back to gorge on a power breakfast of special speed-enhancing grain.

Every afternoon when she’s finished her school work, she does the same. Meanwhile, she checks any nests, cuddles the chicks and monitors the health of all 76 birds — she knows every bird by sight and ring number.

She examines their stools under a microscope if they’re looking hunched and unhappy, discusses breeding options like a pro, trains them and studies the weather forecast but, most of all, just spends time with the birds.

‘It just feels good being with them,’ she says. ‘I love to hand-feed them and they love to sit on me,’ she says. ‘I chat to them and I whistle and, you know what, they never poo on me!’

Elizabeth is just nine but is utterly devoted to pigeons. She has it in the blood — courtesy of her pigeon-mad father James, 41, and grandfather Derek, 83, who loved pigeons more than his first wife — and is already being hailed as a future national champion.

Last season she and her beady-eyed charges — two young birds called Purbeck Dash and Triple B — won four of six races in Devon and Cornwall, beating several former title-holders (including her dad) and ruffling a lot of feathers in professional pigeon-fancying circles.

Her first victory was a 90-mile contest in which her dad’s bird flapped home fourth. James had been worried that she might do so badly she’d be put off for life.

Anxious Purbeck would get lost or hurt — pigeon racing is fraught with hazards — Elizabeth retired him to a luxury life of stud and won the next three races with Triple B, gaining a slew of trophies. 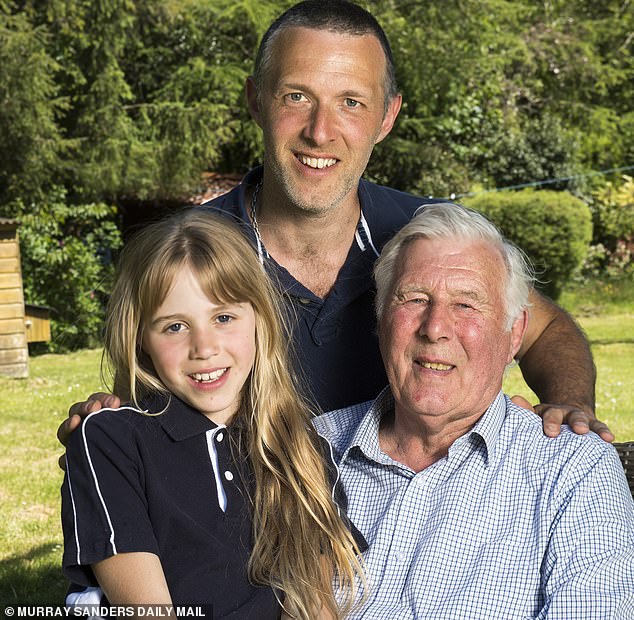 Flying to the top: Elizabeth Cook with her father, James, and grandfather, Derek

She is limbering up for this year’s local season — which starts in early June — followed by her first shot at the ‘young birds’ nationals from Guernsey in September.

Next in her dreams will surely be a shot at the Tarbes National — a 580-mile race from southern France to Britain against at least 10,000 other birds in pursuit of glory (as well as a large cash prize and a car), known as the Grand National for racing pigeons.

But first, and for the benefit of those not among the 20,000 registered pigeon fanciers in the UK, a bit of background on homing (or racing) pigeons.

Which — as every member of the Cook pigeon dynasty tells me, more than once — are very different from the feral ‘flying rats’ that terrorise farmers, rake through bins, spread disease and leave mess all over Trafalgar Square.

These avian athletes — released en masse from a start point to race home to their respective coops — are sleek, muscular, extremely beautiful close up and surprisingly clean and odour-free.

‘They love to bathe!’ says Elizabeth. ‘In water, snow, hail, anything. They are very hygienic.’

They are also clever. ‘They’re the most intelligent animals on the planet,’ says James, who used to be a builder until he broke his knee and started breeding pigeons professionally from his stud in the garden. ‘They are one of the few animals that can recognise themselves in the mirror!’

Amazingly, he’s right. They can also recognise every letter of the alphabet, as well as photographs of their handlers — all Elizabeth’s birds recognise her — and they mate for life. Though, as grandpa Derek puts it: ‘You always get the odd sneaky cock bird sneaking in for a quickie.’

In 1995, Japanese researchers even trained them to differentiate between works of art by Monet and Picasso, for goodness’ sake. More useful, perhaps, is their inexplicable ability to navigate their way home from pretty much anywhere at distances of up to 700 miles in a day, and speeds of 100mph (with a tail wind), back home for a nice bowl of grain.

‘No one knows how they do it,’ says James. ‘That’s why we respect them so much.’ But however pigeons achieve this, it made them perfect for delivering messages in war time (they are the most decorated animals of both world wars) and brilliant for racing. Yet even over 600-mile courses, they’ll never take the shortest route.

So instead of travelling as the crow flies, they’ll follow the hollows of valleys, skirt thick woodland to evade hawks and trace the route of major roads, often going round the roundabouts and choosing the exit towards home.

When Derek got his first pair of fan-tailed pigeons, aged seven, there were more than 100,000 registered pigeon racers. He started racing aged 13, has kept birds ever since and loves them with all his heart.

‘It’s not a hobby, it’s a disease!’ he laughs. ‘Once you’ve touched one, you’re done.’ As was his first marriage, when his wife tired of his passion for pigeons.

‘My second wife is much more understanding,’ he says.

Indeed. She stood by happily as he gave up hundreds of thousands of hours to his birds, joined every pigeon club going, supported the annual shows in Blackpool and Epsom and encouraged their son, James, and now Elizabeth to do the same. Little wonder Elizabeth was up and running with her first breeding pair, Mr and Mrs Purplish, by the time she was seven.

Just two years later, she’s ranked first overall at her local Bude Pigeon Racing Club, best junior racer for the Devon and Cornwall region of the Royal Pigeon Racing Association and is 29th out of 500 racers in the region!

While pigeons are inextricably linked to the working class of the North, and of South Wales, today’s 20,000 members come from all over the UK, all backgrounds and include more and more women.

The Queen is one of the industry’s most enthusiastic fanciers and recently spent £40,000 on a new loft at Sandringham for her 200 pedigree birds. Heavyweight boxer Mike Tyson has long been a passionate pigeon fancier and pins the start of his boxing career on the moment someone ripped the head off one of his prize birds, and he punched him, hard.

The jewel bird in the Cook collection is Princess Pao, an 11-year-old who came second in a 600-mile race from Pau in southern France and has just laid a clutch of two eggs. The offspring, when weaned in 51 days, could fetch up to £2,000 a pop.

Two thousand pounds! For a pigeon? But seemingly that’s nothing. James reminds me of Armando — nicknamed ‘the Lionel Messi of pigeons’ — which was sold last year for £1 million to a Chinese buyer and is now enjoying life as a feathered stud muffin.

‘His racing days are over. Would you want to risk letting a million-dollar pigeon out?’ says James.

Because however brilliant they are, some fly into power cables and turbines, others are picked off by birds of prey, some die from exhaustion and others mutiny and throw their lot in with the feral flying rats. Which means that the wait by the coop in the hours, often days, after release is the worst bit.

‘Sometimes they’re shattered, sometimes you’d have thought they’d just flown round the garden,’ says Derek. ‘I had one come back. She couldn’t quite make it to the lofts — she dropped a few feet short and I had to pick her up, she couldn’t go any further.’

His eyes suddenly look rheumy. ‘To think, a little thing like that can fly for 580 miles. In a day. It makes your heart pump.’

Elizabeth is rather more sanguine: ‘Of course, I worry they are not going to come back, but I am excited to see if they win. Sometimes you lose one. It’s sad, but it’s just one of those things.’