Washington: It seemed hard to imagine the US presidential election becoming any more volatile and intense, but that's what has happened following the death of the iconic progressive Supreme Court Justice Ruth Bader Ginsburg.

Ginsburg's death from cancer, at 87, opens up a vacancy on the nation's most powerful court just five weeks out from polling day. It will further heighten the already stratospheric election stakes and turbocharge the vicious partisanship that defines current American politics. 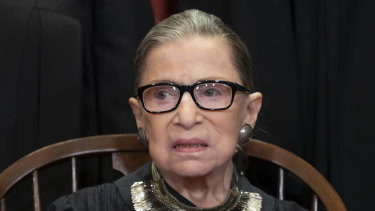 It's the US Supreme Court, rather than the Congress, that has settled many big debates on issues such as abortion, same-sex marriage, healthcare and campaign finance laws.

The most pressing question for President Donald Trump and Republican Senate leader Mitch McConnell is whether they try to ram through a replacement for Ginsburg before election day.

In the days before her death, Ginsburg dictated a statement to her granddaughter that said: "My most fervent wish is that I will not be replaced until a new president is installed." But time constraints and political calculations, rather than Ginsberg's dying wishes, will determine what happens from here.

The process of confirming a nominee in just 45 days would be extremely tight. He or she has to be vetted, Senate Judiciary Committee hearings have to be held and a final vote would need to be taken. It took three months after Trump announced Brett Kavanaugh for him to be appointed to the court. 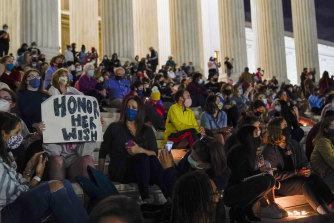 People gather at the US Supreme Court in Washington after the announcement of the death of Supreme Court Justice Ruth Bader Ginsburg.Credit:AP

It's more likely that McConnell would try to fill the seat in the "lame duck" session that follows the election. Even if Democrats win control of the Senate in November, Republicans will maintain their current majority until January 3 – when the next Senate is sworn in.

That would allow Republicans to leave a booby trap for Democrats in the form of an entrenched 6-3 conservative majority on the Supreme Court.

The effect on the election is even more unpredictable. But there is a potential upside for Trump, who has been looking for a game-changing issue to upend the trajectory of the race.

The polls have shown him trailing Biden by seven percentage points, and most Americans believe he has done a poor job handling the coronavirus pandemic. His efforts to shift the conversation to issues such as law and order haven't boosted his standing so far.

A Supreme Court vacancy gives Trump a new issue to campaign on that will resonate with conservative voters. Judicial appointments, as a rule, have been a bigger motivator for Republicans than Democrats given their desire to overturn rulings such as the Roe vs Wade decision that legalised abortion. Last week Trump unveiled a list of potential Supreme Court appointees for a second term in an attempt to elevate the issue.

Even if he doesn't have time to fill Ginsburg's position before election day, Trump could announce his chosen nominee in the coming weeks to fire up the Republican base. In particular, a focus on the Supreme Court could boost turnout among white evangelical Christians for whom abortion is a major issue.

But Trump was already a turnout machine — both for Republicans who adore him and Democrats who loathe him. Participation in the election was already set to be extremely high. And Supreme Court appointments matter far more to loyal partisans than to the ideological swing voters.

The Biden campaign will also try to turn the vacancy to its advantage. Many Democrats are still furious that McConnell refused to allow a confirmation hearing for Barack Obama's nominee in 2016 because it was an election year. The prospect of having another Supreme Court seat "stolen" from them will likely motivate donations to the Biden campaign and volunteers to help get out the vote.

Ginsburg was a beloved figure among progressives – including many younger progressives who are not excited by Biden's candidacy but are incensed by the idea of Roe vs Wade being overturned. Fans of the feminist pioneer flocked to the steps of the Supreme Court in Washington almost immediately after her death to pay their respects.

We're in uncharted waters and more surprises will follow as the battle to fill the liberal icon's seat plays out. But we know one thing already: a remarkable election just became even more extraordinary.

Our weekly newsletter will deliver expert analysis of the race to the White House from our US correspondent Matthew Knott. Sign up for the Herald‘s newsletter here, The Age‘s here, Brisbane Times‘ here and WAtoday‘s here.